Will the US Become a Socialist Country? 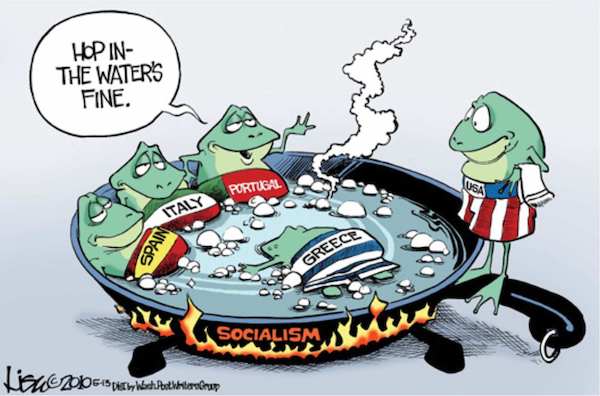 Recently, many political hopefuls on the Left in the US have “come out” as socialists. Some may have been socialists all along, whilst others may merely be hoping to cash in on the popularity of avowed socialist Bernie Sanders in 2016.

Whatever the answer, those on the Right have gone into attack mode, fervently stating, “The US will never be a socialist country!”

This will unquestionably become the primary emotionally based issue until the 2020 election.

Of course, in the modern world, very few countries are entirely socialist, or entirely capitalist for that matter. Most are a combination. Certainly, no country is free from government sticking its fingers into free enterprise, even if it’s just as a regulator. It’s just a question of the degree of government meddling.

So, what will be the fate of the US in 2020? Will this be the death of capitalism there? Will it become a country in which goods and services fall under government control?

Well, let’s have a look.

Social Security is a most decidedly socialistic government programme, one that takes up (according to figures provided by the US Office of Management and Budget) 24% of US government spending.

Medicare, Medicaid, etc., also come under the heading of government-run management of goods and services, thereby defining them as socialist in nature. They’re responsible for 26% of government spending.

Add to that, Safety Net Programmes (9%), Benefits for Veterans and Federal Retirees (8%), Education (3%), Transportation Infrastructure (2%) and Science and Medical Research (2%) – all of which can be provided by the private sector – and the number rises to 74%. Another 4% of expenditure comes under the “miscellaneous” heading, but much of this, too, can be performed by the private sector.

In spite of this fact, government takes them all under its wing to the tune of $3.4 trillion annually.

The 1787 Constitution envisioned the government as being responsible for the Military (15%), Interest on Debt (7%) and International Affairs (1%) – presently, a total of 23%.

By the above tally, it’s safe to say that the government that runs the US is already over three-quarters socialist in its method of management.

But there may be those who discount some of the items that make up the 77%. They may say that it’s a good idea that, for example, roadbuilding or education be managed by government rather than the private sector.

So, even if we were to say that we’re happy to have government compete with the private sector in such areas, benefits alone still amount to 67% of spending.

That, in essence, means that the US is between two-thirds and three-quarters socialist now, depending upon your assessment of what a government should manage.

So, what does that mean? Is the US a socialist state already?

Well, like most states today, it’s a gumbo of mixed concepts. And to understand this, we should first look at one of the most misunderstood “isms”: fascism.

Fascism’s creator, Benito Mussolini, said, “Fascism should more appropriately be called corporatism, because it is a merger of state and corporate power.”

This takeover of power by corporatism in the US began, in earnest, about a hundred years ago and, at this point, is virtually complete. Today, the US is run jointly by Big Business and government agencies. Collectively, they’re most commonly described as the “Deep State.”

They’re not subject to election and tend to be relatively invisible to the public. Those who run for office receive the limelight and are assumed by the electorate to “run the show,” although, they are, for the most part, bit players.

The actual management of the US is corporatist; however, the system by which it’s managed is an odd combination of (mostly) socialism and (to a lesser extent) capitalism.

It’s important to note that, whilst conservative political candidates tend to wrap themselves around the flag, vehemently asserting that they’ll not tolerate socialism, they do, in fact, vote in favour of increases in socialist programmes in every administration.

By contrast, liberal political candidates tend also to pretend that the US is still a capitalist state. This serves their rhetoric well, as it allows them to claim that the “present capitalist system” is failing Americans.

The system is indeed failing; however, it is not a capitalist system. Truth be told, the great majority of failings emanate from existing unworkable socialist programmes and their enormous costs.

Whilst both conservative and liberal candidates are far from accurate in their claims, liberals almost always hire better public relations firms and produce more effective rhetoric, and the US has moved steadily to the left for the last ninety years.

All of the above suggests that the slow slide into socialism in the US will continue.

But this may not play out at the present rate, as we’ve seen a significant wrinkle on the horizon that may alter the slow progression into socialism.

In 1929, a stock market collapse occurred under the leadership of a conservative president – a wealthy businessman who had never before run for public office. This event was used by liberals to enable them to bring in a far-left president and, under him, to move the US into a semi-socialist state.

The markets are presently in a bubble of historic proportions. And the US once again has a conservative president – a wealthy businessman who had never before run for public office. Should there be a crash prior to November 2020, the stage will be set to complete the transition to full socialism, using the same rhetoric as in 1929.

It’s important to remember that, after the 1929 crash, Americans were so enamoured of their incoming socialist president that they allowed him to be president for life. (He was elected to four terms and died in office.) If this were repeated in 2020, a full sixteen years would be available to make the transition to full socialism.

Add to this the fact that, in the 1930s, most people prided themselves on their self-reliance. Today, at least half of all Americans receive federal largesse, and rather than be ashamed, as they would have been in the 1930s, they often wear their government dependency as a badge of liberalism.

Considering all of the above, it’s safe to say that, whist full socialism in the US in the near future would depend upon as-yet-uncertain events, the US is nearly there already, and whatever happens, it will not be turning back.

Editor’s Note: Misguided economic ideas are advancing rapidly in the US. Socialism continues to grow in popularity among Americans. All signs point to this trend accelerating until it reaches a crisis… one unlike anything we’ve seen before.