Will the New World Order Succeed? 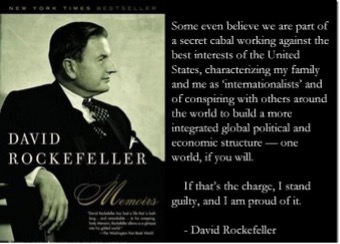 The concept of the New World Order first gained prominence at the turn of the twentieth century. It’s been in the works for quite a while but has ramped up considerably in recent decades. Not surprisingly, as its autocratic intent has become more apparent, people have become increasingly fearful that its coming will result in their subjugation.

At one time, economic moguls, industrial leaders and even presidents proudly stated their support for a New World Order. In fact, as can be seen in the image above, David Rockefeller stated (in his Memoirs in 2002) that he was fully on board with the New World Order.

He has since stated,

We are grateful to the Washington Post, the New York Times, Time Magazine and other great publications whose directors have attended our meetings and respected their promises of discretion for almost 40 years… It would have been impossible for us to develop our plan for the world if we had been subjected to the lights of publicity during those years. But, the world is more sophisticated and prepared to march towards a world government. The super-national sovereignty of an intellectual elite and world bankers is surely preferable to the national auto-determination practiced in past centuries.

And yet, increasingly, the push for the New World Order is now being hushed up, even as its implementation has now begun. Interestingly, Wikipedia now titles it as “New World Order (conspiracy theory)”, where it once left off the damning disclaimer.

But why should this be so? Well, if a people believe that unpleasant times are a long way off, they tend to ignore them. However, when they become imminent, people suddenly take notice. And here we refer to the more recent words of Mister Rockefeller:

“We are on the verge of a global transformation. All we need is the right major crisis.”

That major crisis has now arrived on our doorstep in the form of a virus and the rolling-out of the New World Order has begun.

People have been conned into believing that a common seasonal flu has somehow taken on magical properties, with the potential to kill anyone who does not receive the government-approved vaccine. Although this vaccine is in the experimental stages and has not, in fact, gained the FDA approval to even be categorised as a vaccine, fear of death has made millions of people abandon their sense of reason and comply with anything the government demands, regardless of how irrational it may be.

Children cannot go to school, even though they’re almost certain to be unaffected by the virus. Those who don’t get the jab will not be allowed an immunity passport to travel, even though the vaccine doesn’t ensure immunity. And any place that people congregate to discuss issues – churches, bars or sporting events – are closed down or limited as to use. And yet, rioters have been tolerated – and even encouraged – in forty states.

The COVID hysteria has not been created by circumstances, but by governments and the media.

All of this (and quite a bit more) has fast-tracked the coming of the New World Order.

Over the many years that the New World Order has been presented by the elites, it has always had one consistent feature: that when it was introduced, it would be uniform, throughout the world.

And so, as that’s the predominant aspect of its presentation, it’s understandable if we presume that the Order is a given: that all countries will get on board and stay on board.

That will not be the case.

For anyone who has studied human psychology in any depth, it’s understood that sociopaths make up roughly four percent of any population, anywhere in the world. And that the alpha rats of any society – those who seek to dominate over others – make up the ruling class, as they’ll pursue it with greater fervour than non-sociopaths.

That, of course, ensures that the leaders of most all countries, but particularly the larger ones, will consistently seek to dominate their peoples and can therefore be expected to embrace the New World Order concept.

And it is for this reason that we may assume that a New World Order will succeed.

But there’s a flaw in this reasoning.

Just as a gang of criminals may join together to pull off a robbery, each agreeing to the plan, that tends to change in the aftermath of the robbery. Once it’s taken place, each robber tends to reveal that, all along, he had a hidden motive and intended to double-cross the others, so that his share of the spoils would be greater than he’d agreed.

In world terms, the tendency is the same. All that’s different is the scope of the plan.

In actual fact, the New World Order is made up primarily of the leaders of First World countries. Their hope is to create a cabal that, following an economic collapse in the First World, the Order will somehow rise like a phoenix from the ashes.

But this order cannot be complete without the cooperation of the other powers.

The countries of the second world – in particular, Asia – have for many years kept their cards close to their vests. They’ve followed a path that in most ways mimics the New World Order. However, they have no intention of yielding their power to the West.

An interesting trait common to all sociopaths is that, like the gang of robbers, they may agree on the surface to a grand plan, yet, when the time comes to divide the spoils, it’s revealed that they had their own agenda all along.

So, what does this mean as to the relative success or failure of the New World Order?

Well, the First World is on the ropes economically. They’ve reached an end-game condition and most certainly will crash. The first stages of that crash are now underway.

The attempt to create a New World Order will be very costly. An enhanced police state will be necessary at home and expanded warfare can be anticipated away from home.

The First World will either self-destruct from a combination of debt and misadventure in the coming decade, or will at the very least, fall to its knees.

Either way, when this occurs, other, stronger powers can be expected to step in. (Historically, world politics abhors a vacuum.) The world shall see a shift in dominance as it always does when one empire is relegated to the dustbin and others take its place.

This will take years to play out, but when the dust has settled, the New World Order will be yesterday’s news and the new concern will be whether the emerging powers will be able to dominate the entire world or only portions of it.

Editor’s Note: Unfortunately, there’s little any individual can practically do to change the course of these trends in motion.