Why This New Economic Citizenship Option is Crucial for Freedom Seekers 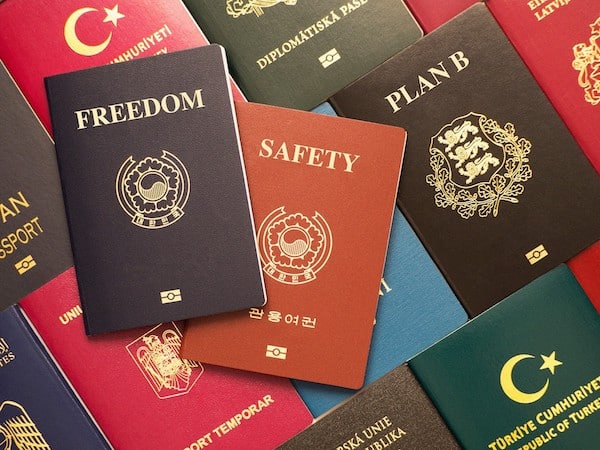 At one time, most people were content to have whatever passport their birth entitled them to, for the duration of their lives. But as many governments have become increasingly oppressive to their citizens, more people, in more countries, have been seeking second and even third citizenships. As International Man feature writer Jeff Thomas began living multi-nationally during his boyhood and does so to this day, we asked him to weigh in on the subject.

International Man: In recent years, the opportunities for citizenship by investment (CBI) have grown considerably. Recently, the Heart of Europe development offered a new package in which, investors may buy a property in their Dubai development for about $1.36 million. The package includes the €100,000 minimum investment and €35,000 fees to obtain citizenship in Moldova. This means that the investor is assured of a new citizenship and passport when he buys into the development. Do you think that this represents an advancement in CBIs?‎

Jeff Thomas: Well, it appears to be a step forward. I haven’t researched it yet, but it appears that Heart of Europe presents the property and the citizenship as a package deal. That would be an advancement on the current situation. In other countries that offer CBIs, the client buys the property, which qualifies him to apply for citizenship. If what I’ve read is correct, this “package” provides greater certainty of citizenship, in addition to less work for the applicant.

International Man: Do you think that there will be a lot of takers?

Jeff Thomas: The high price tag will limit the numbers, but Heart of Europe isn’t the only offering that requires an investment of a million dollars or more. And with the “package deal,” they seem to be getting more creative than other offerings have been.

In general, those offerings that involve European Union access tend to be pricey. Moldova isn’t an EU member, but they do enjoy access to the Schengen countries and their passport allows for visa-free access to 121 countries in total. That’s quite a useful passport to have. In addition, purchasers are not required to ever set foot in Moldova.

International Man: Is there a reason why they might wish to?

Jeff Thomas: Not really. Moldova is a small poor country next to Ukraine that’s unlikely to attract travelers that have a million or more to spare on a passport. But then, you might also ask whether Dubai is a good place to own property. It’s located near the Strait of Hormuz, which I’ve long thought may well be the location where World War III begins. Strategically, it’s the ideal spot to start a war through a false flag incident, and that appears to be unfolding recently.

To my way of thinking, buying property in Dubai right now is buying at the top of the curve. So, unless an investor really needs visa-free access to those 121 countries and can’t get it otherwise, Dubai wouldn’t be on my list.

International Man: You’ve held multiple passports for the majority of your life. How have you benefited?

Jeff Thomas: Well, I have sufficient documentation to live and work freely in thirty different countries, but realistically, that’s not necessary. I see multiple passports more as an insurance policy. We’re approaching a period of dramatic change, worldwide. We’re going to see entire countries collapse economically, politically and, most importantly, socially. Nations that are quite livable right now, may very possibly become police states in the not-too-distant future.

So, you want to have options. You want your options to include at least two and possibly more countries that are likely to fare well in the future. The trick is to have that prepared well in advance, because, once the rending of nations has begun, it will no longer be possible to prepare. In fact, for many people, there will be a point at which it’ll be necessary to quickly pack a bag and head for the airport, with a pre-arranged destination ready to welcome you. Multiple citizenships can be an important part of the ability to do so.

International Man: Just ten years ago, there were only a very few countries offering CBIs. Why the sudden proliferation?

Jeff Thomas: There are two answers to that: need and opportunity. The need is that more people are figuring out that they may well find themselves in a squeeze. And generally speaking, most of the countries that formerly made up the “Free World” have become more militarized and more regulated. The writing’s on the wall and more people are seeing it.

The opportunity has been taken up almost entirely by small countries that don’t have thriving economies. It began with small islands in the Caribbean, most notably St. Kitts & Nevis, then expanding to Antigua & Barbuda, Dominica, Grenada and others.

St. Kitts & Nevis set the stage by offering citizenship with the purchase of a property valued at $400,000 or through a gift to the government of $250,000. (With the former offering, after five years, you can sell the property and keep the citizenship.) They did a very good job and remained consistent, even through changes in government, which is often the big test of programmes such as CBIs. The others then mimicked St. Kitts & Nevis.

International Man: Do you see this trend continuing to expand? Or will the larger nations try to end the programs?

As to larger nations trying to put a stop to it, that’s been the case for decades. But remember, if a larger jurisdiction such as the EU or US tries to tell a small poor country how they should grant citizenship, they’ll be seen as the bullies that they are, so they have to tread lightly. To date, their success has been minimal but not for lack of trying. This is not a trend that can easily be stopped.

International Man: Organizations like the Organisation for Economic Co-operation and Development (OECD) have stated that the proliferation of CBIs encourages the hiding of assets offshore.

Jeff Thomas: And they’re quite right. The OECD was created for two reasons: to eliminate the right to economic privacy and to institute worldwide minimum taxation. The OECD is made up of nations that tax their people heavily. And no parasite wants its host to shake it off.

Multiple passports allow for greater freedom for the holder. The OECD seeks the opposite of freedom. Whenever an organisation makes noises about seeking to eradicate “terrorism” or “money laundering,” your antennae should go up. What they’re really saying is that they don’t want you to be able to expatriate your wealth. They regard you as prey and they want you to stay in their pen where they can bleed you at will.

International Man: With so many countries now offering CBIs, is there a reason why the price tag is still so high?

Jeff Thomas: Yes. Again, the sponsor-countries are quite small and don’t have buoyant economies. They’re providing CBIs to generate revenue. I think Dominica is the lowest, with citizenship for $100,000.

But here’s what citizens of larger countries often fail to realise: The political leaders in these small countries are generally poorly educated and fear taking on too many new citizens who are well educated and wealthy. They fear that, in the next election, they’ll be voted out in favour of more educated candidates. So, they think the citizenship grants need to be few but pricey.

What no political leader in any of these countries has figured out yet is that they can offer citizenship without the right to vote. After all, those who buy CBIs couldn’t care less about voting. They want freedom.

With that sort of a dual offering, the country could sell large numbers of citizenships cheaply – Walmart citizenship – and profit from the volume of sales.

The country that figures that out will change the whole complexion of CBIs forever. Once multiple citizenships break the $50,000 level, there are going to be large numbers of takers.

International Man: Do you think that could be viable?

Jeff Thomas: Yes, absolutely. Passports have been around only since the fifteenth century and didn’t become common for a long time after that. In the scheme of things, they’re a new invention. We take it for granted that, as we prosper, we buy a better house in a better neighbourhood. This is just taking that better neighbourhood concept to the next level.

We take it for granted that an individual can have as many homes as he can afford. Having multiple passports is no less logical, and I think that once small countries figure out how to do it, it will become a reality.

That’s why Doug Casey and his team just released a new complimentary report, “The Easiest Way to a Second Passport.” It contains all the details about one of the easiest countries to obtain a second passport from. Click here to download it now.