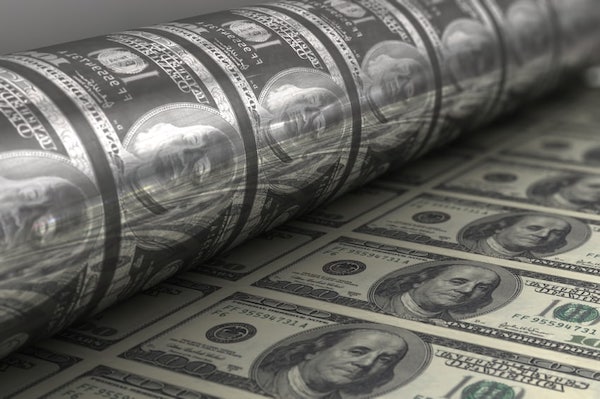 Doug Casey’s Note: In the over 30 years I’ve known him, my respect—and liking—for Frank Giustra has only grown. Not just because he’s a world-class businessman, having built Yorkton Securities into a powerhouse, and then founding Lionsgate Entertainment. More relevant to this interview, he’s a first-rate judge of the markets—one of the best I’ve ever met at seeing turning points and understanding trends.

He’s one of the few financiers in the “Master of the Universe” class that understands gold and economics. Frank knows what he’s talking about. I suggest you read this closely.

International Man: The coronavirus was the pin that popped the Everything Bubble. What do you think the economic ripple effects will be?

Frank Giustra: I think it was a bubble that was begging to be pricked. The cause was never the issue. I don’t think anybody predicted the cause would be a pandemic.

Last summer in an interview, I provided a list of things that might prick the bubble. A pandemic wasn’t on the list, but here we are.

As I said, the bubble was begging to be pricked. It was a bubble unlike any bubble we’ve ever seen in history—and it was a global bubble. It was a debt-driven bubble, spread over many asset classes.

I think the economic hit from COVID is going to be long-lasting. All the fiscal and monetary policy response is not going to address what is actually changing out there, which is a lack of demand.

We were already going into a slowing global economy when the COVID crisis hit. Everybody was preparing for the next recession, and this event completely killed the remaining demand.

Furthermore, I don’t believe we are returning to the old “normal.”

I don’t believe we have seen the end of this pandemic. It won’t end with a first wave only. The world lacks a concentrated coherent effort—in fact, it’s all over the map.

The US response is unique to say the least, and it will come back to bite them.

We haven’t seen the effects of this crisis on the developing world yet. I think when it hits there—if it hits in the same way that it hit the developed world—it’s going to be even more tragic. It’s going to doubly impact global supply chains, demand, and all sorts of things.

So, I think we’re going to probably see a second wave, maybe in the fall or winter.

The reaction will probably be more severe than with the first wave because people and governments will completely freak out and overcompensate.

Even when we get back “normal,” it won’t be the old normal.

I think that people’s behavior is going to change with respect to travel, consumption, and going out.

And now you’ve got all this crazy money printing that’s taking place. I predicted we were going to get money printing but not to the degree that we’re seeing now.

The money printing we are now seeing is in full ludicrous mode. We’re going to see the Fed balance sheet probably at $10 trillion before the year is out.

Looking ahead, I think we are going into a 1970’s style stagflation but in hyperdrive. And, that’s probably the worst of all worlds.

I just don’t see how we come out of this easily over the next little while.

As I said, this was bound to happen. We were already coming to the end of a long-term debt cycle that lasts 70 years or so, and we are now at its peak.

Everybody was speculating like crazy. Now, we are seeing the unraveling of that bubble, and it’s going to be very, very ugly.

Personally, I am more concerned about the geopolitical impact of what’s coming than I am about the economic impact.

Everybody can afford to live a poorer lifestyle, but what happens in these situations is a trend towards deglobalization as we are starting to see now.

That’s what worries me the most, especially with respect to the U.S. and China: the back and forth blame game that’s taking place. We already had a scenario where the relationship was very fragile between the U.S. and China.

There’s no stopping China from becoming the next economic superpower. But I think the U.S. is taking a position of trying to undermine that.

While this COVID situation is very unfortunate, I’m more worried about what’s going to happen geopolitically as we get into very difficult economic times.

International Man: Those are great points.

You’ve mentioned something that I think no one has really focused on. Many people are just watching what is happening with the U.S., Canada, and the rest of the developed world. Few realize there are many weaker links out there in the third world.

Just look at Argentina right now. As you know, it’s a perfect example of everything that can go wrong. It’s not just Argentina; it is happening in countries like Venezuela, Lebanon, and others.

Frank Giustra: I grew up in Argentina as a little boy.

My father lost all his wealth there. I’m very familiar with Argentinian history.

I think it will not be long before the US ends in a similar place. And likely in a lot less time than I would have thought last year.

International Man: Since the global lockdown, the Federal Reserve has created trillions of dollars out of thin air to bail out everyone—huge corporations, small businesses, average Americans, airlines, and more.

In just the past few months, the US government has created more money out of thin air than it has for its entire existence.

What does this mean for the US dollar?

Frank Giustra: All discipline has gone out the window. We are talking about trillions of dollars like we are throwing around baseball scores.

It’s amazing; in a country that is so divided, politicians are united on one thing—they can spend endlessly.

That’s what they’re doing now. There is no opposition for $2- or $3-trillion-dollar stimulus plans.

The Fed bailouts that cost trillions of dollars to bail out the markets, not to save Main Street. And there will be a day of reckoning for all this useless money printing.

The U.S. dollar is going where every other reserve currency in history has gone: in the dust bin.

It’s fascinating, as it happens on a regular basis every 100 years or so. For some reason, Americans don’t believe it will happen to them because, after all, it’s America!

I wonder if the Dutch believed that… or the French or the British.

The printing presses are now in ludicrous mode, and they’re going to stay there.

I don’t think there is any going back to any kind of discipline—whether fiscal or monetary policy. I think the days of sub-trillion-dollar deficits are long gone.

It is far too easy for politicians to wave their hand and say, “Okay. Pile on another two or three trillion dollars.”

I think the federal deficit will end up at four or five trillion dollars before the year is over.

They’re not done. An additional stimulus will come. They will find that the idea of a V-shaped recovery is sheer fantasy.

So, they’re going to keep throwing more and more money at it.

I did an interview last August where I was asked specifically about the U.S. dollar as a reserve currency, and I said, “It’s inevitable that the US dollar will cease to be the reserve currency at some point down the road, but that’s a long way off.”

Once the COVID crisis hit, I’ve changed my views on the timeline.

Now, I think the US dollar’s days are numbered in the shorter term, but I am not sure how, exactly, it’s going to play out.

The only reason that the dollar sat on top of all the other currencies—all the other reserve currencies of the developed world—is because it actually provided a yield. As small as it was, there was a yield. You could buy U.S. Treasuries and get something, whereas, if you bought euros or yen, you got a zero or negative return.

Last summer, I predicted that U.S. rates would go to zero before the recession hit because Trump was already pushing for it, and once they went to zero, the money-printing would start.

I said, “Once the U.S. dollar goes to zero yield, what reason is there for any foreign investor to invest in U.S. dollars? Why would you do that, especially when they’re printing it like crazy?”

It just goes on top of the same garbage pile as every other non-yielding currency.

I said, when that happens—and you’re seeing it now—buyers are going to walk away.

So, who’s left to buy all that debt?

The Fed will be the buyer of last resort, and the only buyer. And you can see it already happening. The Fed is buying the Treasuries as they are being issued.

He said, “We’re going to hit a recession. Rates will go to zero; investors are going to start looking for returns that they believe will give them a better return than US Treasuries, but you have these growing deficits and all these unfunded pension and healthcare liabilities coming due. So, what’s going to happen? The buyers disappear, and the Fed has to buy it. The Fed has to monetize that debt.”

So, what we’re going into now is a grand debt monetization.

Here is the absurd part. The Fed is pushing for fiscal stimulus, saying it’s done its part with monetary stimulus. But at the end of the day, it’s all one and the same, because all deficits are being monetized, regardless. It’s a Ponzi scheme.

You can create a fiscal stimulus plan for another five trillion dollars, but you’re going to monetize that immediately, so it’s all about printing money. And by doing so, you destroy your currency just like every other great power throughout history.

I think that’s where we’re headed.

(You can find Frank’s writing and insights at http://frankgiustra.com/.)