Why I Would Take A Nicaraguan Passport

A while ago, I posted on Instagram about how I would gladly accept Nicaraguan citizenship if it were offered to me.

A number of folks, including a couple of Nicaraguans, were confused about why someone who grew up in the United States and now lives a global citizen lifestyle would want to have a Nicaraguan passport.

Today, I’m going to explain the thought process of why I would take Nicaraguan citizenship specifically as well as what you should consider when choosing the best second citizenship for you.

WHY A NICARAGUAN PASSPORT?

While I can’t say that my post on Instagram was 100% serious – I don’t know who is going to just step out of the woodwork and offer me a Nicaraguan citizenship tomorrow – I stand by my point. I would be willing to be Nicaraguan.

A little over a year ago, I had a gathering at my home. People who were living in Malaysia from all over the world came to my dinner party. There were folks from Iran, Russia, the US, Egypt, and one gentleman from Nicaragua.

As I spoke with this Nicaraguan gentleman, he told me he couldn’t believe that I had given up my US citizenship. The dream of everyone where he’s from would be to live in the US and be a US citizen. He told me the Nicaraguan passport is terrible.

So, I sat him down and told him that I didn’t think his passport was that terrible at all. Look at the map of all the places Nicaraguans can go. You can go to more places than a lot of people from wealthier countries. You can go to the UK, Ireland, all over Europe, most parts of the Americas and Asia, etc. The Nicaraguan passport gives you a lot of travel freedom.

But there’s one place where all Nicaraguans apparently want to go and can’t because it’s very difficult to get into: the United States. Welcome to the club.

One of the most difficult countries to visit, let alone immigrate to is the United States. But everyone wants to go there.

We can argue another time about why everyone wants to go to the one country that doesn’t really want them. Why make it so difficult when there are so many other options?

But this conversation with the gentleman from Nicaragua really sparked my thought process. If you are a successful global citizen, the passport you have really isn’t as important as many make it out to be.

THE BENEFITS OF A SMALL COUNTRY

There are a few reasons why I believe Nicaraguan citizenship would be a good option.

Number one is that it’s a small country. Small countries are able to be more flexible. They generally leave people alone. They don’t have a ton of resources to waste on chasing people down over stupid stuff.

Small countries don’t go and start wars all over the world. They don’t generate a bad reputation that you want to run away from. I’ve said for a long time, small countries are often better to be associated with.

Nicaragua is also an emerging country. In my mind, that means that they have to do certain things right.

When countries reach a certain threshold, they think they can do no wrong. They can start taxing their citizens all over the place. They can make doing business there more difficult. They can impose tons of regulations.

They’ve realized what I’ve been talking to you about for years – we have a globally competitive marketplace now. It’s no longer four countries. Every country is open for business. They can capture a segment of the population, a segment of the dollar. They have to be open because they’re not only small but they’re also emerging.

THE TRAVEL OPPORTUNITIES OF A NICARAGUAN PASSPORT

They have good visa-free travel. This surprises a lot of people. They look at these countries that get crap in the media, or they may hear things from other people, “Oh, poor Nicaraguans.”

If you look at the Nicaraguan passport or the Salvadorian passport or some of these other small countries that you think would have terrible passports – you’re going to be surprised.

I wrote an article a couple of years ago about how the fastest growing passport in terms of visa-free travel was Serbia. I spend time in Serbia and love Serbia. Their passport has improved and added so many countries to travel to.

That’s been the general trend over the years. Most countries in the world are opening up to other countries. The US will always be a difficult country to get into, but the rest of the world is opening up.

Southeast Asia, much of the Americas, and Europe are opening up so that people can travel and do business and live there.

It makes zero difference to them.

If there’s a KYC (Know Your Customer) or due diligence process, as long as you pass it, they don’t care what citizenship you have or what country you’re from. If I were to get a Nicaraguan passport having only been to Nicaragua, never having lived there, and not having any ancestry in the country, they would treat me basically as where I’ve come from. They would want police records from places like the US.

Having a passport from a place like Nicaragua gets you into a lot of places. No one’s going to look at you any differently except for a small number of countries like the United States.

A NICARAGUAN PASSPORT IS A GREAT PLAN B

Nicaragua is a lot more tax-friendly than some other places. If you live there, foreign-sourced income is not taxed. As a Plan-B or an escape hatch, Nicaragua is a great option.

Nicaragua has resources. You can grow your own food there. You have access to water. That’s a valuable thing to have. This makes Nicaragua a great option. If you had to go and live there, you could.

And as an added bonus, you can live in Nicaragua in a tax-friendly way that isn’t possible in most Western countries. Nicaragua is also less expensive to live in than next-door Costa Rica. It has a rather low cost of living.

It also is rather simple to get a residency in Nicaragua.

I’ve been to Nicaragua. Some parts of the country, like the capital, can be a little dangerous. You have to be careful, particularly when you’re in Central America. But there are other parts of Nicaragua where you can go and be left alone. You can live on the water or up in the hills.

San Juan del Sur is a beautiful place. Personally, it’s not the kind of place I could live permanently; I need a bit more to do. However, if you love to surf, or just love quiet, ultra-laid back beach towns, it’s a perfect place to spend part or even all of the year.

YOU DON’T HAVE TO MOVE TO NICARAGUA 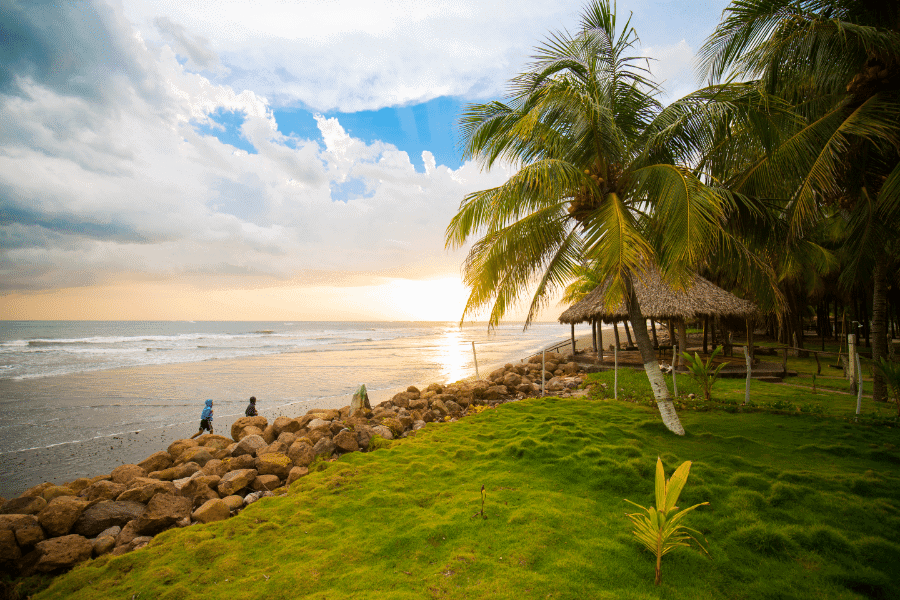 Even if you obtained a Nicaraguan passport, that doesn’t mean you have to live in Nicaragua to get the benefits the passport offers.

Another great reason why I would take a Nicaraguan passport is that you don’t have to live there.

The passport you get from Nicaragua can be used to travel around the world, but you don’t have to stay in Nicaragua and live there.

If you were to give up your Western passport and then went to open a bank account with a Nicaraguan citizenship, more banks would respect you and be open to working with you than they would be towards an American or other Western citizens. We’ve seen banks who are starting to refuse service to folks not just from America but from the UK and Australia as well.

Nobody has a particular beef with Nicaraguans. They’ll let them into their country to visit. They have no qualm with them establishing a residence so long as they meet the requirements and have the money.

In most of the world, you aren’t going to get any crap about being Nicaraguan. Maybe in Mexico they don’t like Nicaraguans, but every region has its own little conflicts. Every country in the world has one or two places that don’t like them.

WHY GET A SECOND CITIZENSHIP?

Understand that your reasons for wanting a second citizenship are different. I used Nicaragua for this article because I recently discussed it with a Nicaraguan gentleman. You could substitute any country in a similar position for Nicaragua and see the same general benefits.

But this gentleman’s reason for not wanting his passport and wanting an American one instead was because he and his friends and his family all wanted to go and live and work in the United States. They wanted the opportunity they had heard about through the grapevine. They had been told that if they lived in the United States, they could make more money.

If you’ve already made money, if you’re already successful, that reason goes out the window. You can get rid of the idea that you need to be a westerner.

If you make money online, if you’re doing consulting or any other business that you could run from anywhere, you don’t need access to these western countries. You can take your existing wealth, shed some of the baggage of your current passport, and add very little baggage with your new passport from Nicaragua.

I’m not saying you have to get rid of your current citizenship and become Nicaraguan or anything like that. What I’m saying is your reasons for getting a second passport are different than what most people think.

A lot of these countries that people look down on actually offer great resources, great livability, great tax policies, are more open and flexible, and they’ll give you a passport that is relatively good to get you around the world.

That’s what most people don’t understand. And that’s why I would take a Nicaraguan passport if it were offered to me.