When Will the Divisiveness End? 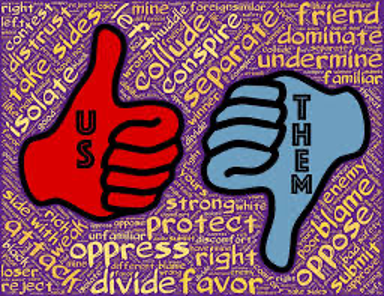 Those who watch American news programmes may choose to watch MSNBC or CNN and shall witness a liberal expert expressing great frustration that the Republican president and his supporters promote divisiveness.

This will be followed by a discussion between the host of the show and other liberal pundits, echoing this pronouncement and expressing their horror that the country is led by a truly evil man who is tearing the country apart.

Just as worrisome, they say, is that those who support his party – the mostly male, mostly white, mostly racist Republican voters – fervently support the creation of divisiveness.

If this were truly a news station, the discussion would end there and the station would then on move on to another news topic.

But this is not what occurs.

Instead, another expert appears on the screen, frustrated and fearful of what he describes as the divisiveness of the president.

The pattern repeats regularly for the remainder of the twenty-four hours and thence into the next day’s “news.”

But this, of course, is not news. It is, by definition, indoctrination.

Should the viewer decide that he’s being brainwashed, he may switch over to Fox News, on which a conservative expert expresses in great frustration that the Democratic Party and their paid lackies, the media, are promoting divisiveness.

This will be followed by a discussion between the host of the show and other conservative pundits, echoing this pronouncement and expressing their horror that the truly evil Democrats are tearing the country apart.

Again, this is not news. It is, by definition, indoctrination.

And if Americans, most of whom view only one side of this rhetoric, not the other, are asked what they think of this charade, virtually all will state that they are deeply committed to their anger at the evil enemy that has unilaterally created the problems of America today.

Each side equally blames the other for being the sole cause of the divisiveness. Each wants it to end, but believes that it cannot end until the evil demon is brought to its knees. And of course, each regards the other as the evil demon.

So, what’s going on here?

Logic tells us that they cannot both be correct.

And so, for those few people who can muster the objectivity to step well away from the fray, what can be seen is a manufactured evil. Indeed, every comment by those on one side, no matter how benign, is immediately described by the opposing side as proof of guilt.

What we’re seeing is conventional political party posturing, blown way out of proportion by a media that’s on steroids in its condemnation… on both sides.

So if we do step back and begin to comprehend that the divisiveness is manufactured, then we must also conclude that it is intentional – that the object is not to resolve differences; it’s to whip the proletariat up into a frenzy and keep them in that state.

Historically, whenever a government has sought to create for itself totalitarian domination over its minions, it first recognises that massive force will be required. And the proletariat must be prepped for this in advance, if they are to accept it.

Increasingly, this is what we are witnessing in the US.

Conservative supporters are biting their nails to the quick in fear of a liberal party that seems to have gone mad. They fear liberals who express themselves by setting cities on fire, looting and murdering people in the streets, making outrageous demands for the elimination of police, and creating unpayable debt to fund those who do not contribute to productivity. The prospect of such people taking control of the government will result in a collapse into collectivism, utterly destroying all that conservatives hold dear.

And liberal supporters live in terror of a conservative party that supports a racist, sexist ogre of a man who has murdered hundreds of thousands of Americans through his mishandling of the coronavirus epidemic and has destroyed the economy doing so.

However, it’s difficult to create a demon, then convince all the people to recognise it as such. It’s far easier to pit one half of the electorate against the other. Feed each side with the same basic information, but with a different slant for each side. In that fashion, when one side defends its position, the other immediately recoils, having been programmed to do so, not realizing that both of the opposing positions have been blown out of proportion.

Historically, the most common method has been to characterise another country as the demon. As George Orwell described, in the guise of his Ministry for Truth,

Totalitarian control thrives on hatred. Anyone who finds that he has already been programmed to hate the opposing group or party is already an operative of the state.

Once the great majority have taken sides and backed it up with hatred, the next step is bondage – a bondage that will be shared by all. The proletariat will not only tolerate the bondage, they will march toward it with the confidence that it is their salvation.

It would be a mistake to wait for the divisiveness to end.

It won’t. It’s not intended to.

Editor’s Note: There will likely be unprecedented volatility of every kind in the months and years ahead.

And most people won’t be prepared for what’s coming.

That’s exactly why bestselling author Doug Casey and his team just released a free report with all the details on how to survive and thrive. Click here to download the PDF now.