“When No Man Has a Farthing…” 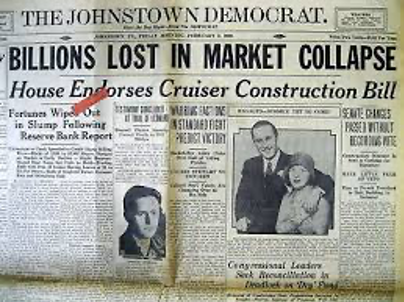 Market cycles have existed since the advent of lending institutions. As far back as 2,000 BC, in Assyria, merchants provided loans to farmers and traders. Often, this created prosperity, with greater amounts of money passing from hand to hand with greater frequency.

Not surprisingly, the interest paid to the merchants inspired them to increase the amounts they would lend, again increasing prosperity.

But periodically, hard times returned and those who borrowed were unable to pay back the loans, leading to recessions.

Since at least the 14th century, rather than lending out gold and silver, goldsmiths in Europe issued letters of credit. Then, in the 17th century, fractional reserve banking emerged as a common practice.

The concept was that a bank might lend out the majority of its deposits, retaining a small percentage for day-to-day business. But for many banks, at some point, the temptation to lend out more in promissory notes than the bank actually had on deposit became too great.

Periodically, there would be a market contraction and the banks would fail. Those who thought that they owned money found that they did not. It was gone.

Fast-forward to the 21st century and we see the fractional reserve concept as the norm, with banks having a host of means by which to lend out multiples of the money they actually have on deposit.

Naturally, this leads to bigger booms, but also bigger crashes.

At present, we’re at the end of the longest boom in history, and the debt levels and budget deficits of many of the world’s leading countries are far beyond anything the world has ever witnessed. Moreover, the greatly expanded level of currency creation through Quantitative Easing is far beyond any level previously seen.

This is an end-run tactic, designed to buy a bit more time, but ensuring that, as the nascent collapse unfolds, it will be the greatest crash in history.

Historically, what happens in a crash is that most or all banks close. Some re-open at a later date; some do not. The lucky depositors are the ones who are told that a portion of their money still exists and that, at some point, they’ll be allowed to retrieve it. But for many others, total loss is the outcome. The amount of cash that was thought to be in circulation existed only as credits and most of it has literally vanished.

At such a time, cash becomes king. People still have assets, but find that those assets are unsaleable, as no one has the actual cash to purchase them, even if they wanted them.

There’s an old English saying that, “When no man has a farthing, the man with tuppence becomes a lord.” This sounds quite old-fashioned, but is nevertheless true.

Farthings are now gone from use in Britain, but tuppence coins (two pence – worth eight farthings) are still in circulation.

In essence, the saying means that when no one around you has any purchasing power, and you have even a small amount of cash, you are indeed a rich man, as you’re one of the very few who’s in a position to purchase assets.

And that leads us to the discussion of real money: gold and silver. They remain as real as they’ve always been. For over 5,000 years, people have returned to precious metals in times of economic crisis. Not surprisingly, the value of gold goes up at such times, sometimes dramatically.

At the same time, when the amount of available money contracts – and most people have far less of it than they did before the crisis – historically, the value of assets drops dramatically. This is due to the fact that, strapped for cash, people try to sell assets, and with the great majority of people attempting to do so, their value on the open market tends to drop dramatically.

It’s quite easy to drop to ten cents on the dollar, or even less. During the Weimar crisis in 1922–23, it was not uncommon for people to sell the treasured family piano for the price of a loaf of bread.

Most gold experts agree that, in a crisis, gold will rise to a minimum of $5,000. Should the crisis become prolonged and should a panic ensue, gold could rise to three times that number and beyond.

In a crisis, such as the one that we’re now facing, promissory notes and bank credits will at some point tumble to the ground, as they invariably do. At that time – when no man has a farthing, the man with tuppence becomes a lord, as he’s one of the very few in a position to buy up assets that will, after the crisis has ended, once again be in demand.

The crisis period that we have just entered will be beyond anything we have seen in our lifetime.

How we emerge from it will depend upon whether we have converted our assets to real wealth whist there is still time.

Editor’s Note:  The amount of money the that is being pumped into every corner of the economy by the Federal Reserve is unprecedented.

That’s precisely why NY Times best-selling author Doug Casey and his team just released an urgent video. It reveals how it will all play out and what you can do about it. Click here to watch it now.