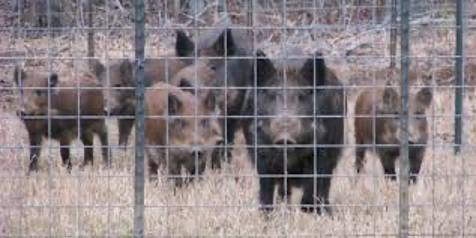 Most of us would like to assume that we’re smarter than pigs, but are we? Let’s have a look.

Pigs are pretty intelligent mammals, and forest-dwelling wild pigs are known to be especially wily.

However, there’s a traditional method for trapping them.

First, find a small clearing in the forest and put some corn on the ground.

After you leave, the pigs will find it. They’ll also return the next day to see if there’s more.

Replace the corn every day. Once they’ve become dependent on the free food, erect a section of fence down one side of the clearing. When they get used to the fence, they’ll begin to eat the corn again. Then you erect another side of the fence.

Continue until you have all four sides of the fence up, with a gate in the final side.

Then, when the pigs enter the pen to feed, you close the gate.

At first, the pigs will run around, trying to escape. But if you toss in more corn, they’ll eventually calm down and go back to eating.

You can then smile at the herd of pigs you’ve caught and say to yourself that this is why humans are smarter than pigs.

But unfortunately, that’s not always so.

In fact, the description above is the essence of trapping humans into collectivism.

Collectivism begins when a government starts offering free stuff to the population. At first, it’s something simple like free education or food stamps for the poor.

But soon, political leaders talk increasingly of “entitlements” – a wonderful concept that by its very name suggests that this is something that’s owed to you, and if other politicians don’t support the idea, then they’re denying you your rights.

Once the idea of free stuff has become the norm and, more importantly, when the populace has come to depend upon it as a significant part of their “diet,” more free stuff is offered.

It matters little whether the new entitlements are welfare, healthcare, free college, or a guaranteed basic wage. What’s important is that the herd come to rely on the entitlements.

Then, it’s time to erect the fence.

Naturally, in order to expand the volume of free stuff, greater taxation will be required. And of course, some rights will have to be sacrificed.

And just like the pigs, all that’s really necessary to get humans to comply is to make the increase in fencing gradual. People focus more on the corn than the fence.

Once they’re substantially dependent, it’s time to shut the gate.

What this looks like in collectivism is that new restrictions come into play that restrict freedoms.

And of course, that’s the point at which the pigs run around, hoping to escape the new restrictions. But more entitlements are offered, and in the end, the entitlements are accepted as being more valuable than the freedom of self-determination.

Even at this point, most people will remain compliant. But there’s a final stage: The corn ration is “temporarily” cut due to fiscal problems. Then it’s cut again… and again.

The freedoms are gone for good and the entitlements are then slowly removed. This is how it’s possible to begin with a very prosperous country, such as Argentina, Venezuela or the US, and convert it into an impoverished collectivist state. It’s a gradual process and the pattern plays out the same way time and again. It succeeds because human nature remains the same.

Collectivism eventually degrades into uniform poverty for 95% of the population, with a small elite who live like kings.

After World War II, the Western world was flying high. There was tremendous prosperity and opportunity for everyone. The system was not totally free market, but enough so that anyone who wished to work hard and take responsibility for himself had the opportunity to prosper.

But very early – in the 1960s – The Great Society became the byword for government-provided largesse for all those who were in need – free stuff for those who were disadvantaged in one way or another.

Most Americans, who were then flush with prosperity, were only too happy to share with those who were less fortunate. Unfortunately, they got suckered into the idea that, rather than give voluntarily on an individual basis, they’d entrust their government to become the distributor of largesse, and to pay for it through taxation. Big mistake.

From that point on, all that was necessary was to keep redefining who was disadvantaged and to then provide more free stuff.

Few people were aware that the first sections of fence were being erected.

But today, it may be easier to understand that the fence has been completed and the gate is closing. It may still be possible to make a hasty exit, but we shall find very few people dashing for the gate. After all, to expatriate to another country would mean leaving all that free stuff – all that security.

At this point, the idea of foraging in the forest looks doubtful. Those who have forgotten how to rely on themselves will understandably fear making an exit. They’ll not only have to change their dependency habits; they’ll have to think for themselves in future.

But make no mistake about it – what we’re witnessing today in what was formerly the Free World is a transition into collectivism. It will be a combination of corporatism and socialism, with the remnants of capitalism. The overall will be collectivism.

The gate is closing, and as stated above, some members of the herd will cause a fuss as they watch the gate closing. There will be some confusion and civil unrest, but in the end, the great majority will settle down once again to their corn.

Only a few will have both the insight and temerity necessary to make a dash for the gate as it’s now closing.

This was true in Argentina when the government was still generous with the largesse, and it was true in Venezuela when the entitlements were at their peak. It is now true of the US as the final transition into collectivism begins.

Rather than make the dash for the gate, the great majority will instead look down at their feed and say, “This is still the best country in the world,” and continue eating the corn.

The risks that lie ahead are too big and dangerous to ignore.