Time to Get Out of Dodge?

For many years, there have been those few people who have warned that the US, amongst a host of other countries, is headed inexorably toward a state of tyranny and that those who value their freedom would be advised to “Get out of Dodge.”

Accompanying this warning has often been a suggestion as to timing. The old saw that “It’s better to be a year too early than a day too late” encourages the early selection of a suitable new country of residence, along with the procurement of premises and the movement of assets, as these take time to put into place. It’s therefore advisable to have the new residence in place well in advance.

That, in the case of the US, is no longer possible. The “well in advance” option has expired.

By why should this be? Isn’t it all theoretical as to whether a state of tyranny is in the offing?

The answer to that question is a decided, “No.”

The coronavirus is presently being used by the powers that be to remove one freedom after another. And whilst some people vainly hope that, once the virus has subsided, freedoms will return, that notion is quite mistaken.

The White House’s virus guru Anthony Fauci has stated that the world will never return to what was considered “normal” before the coronavirus.

This notion that COVID-19 will be “the virus that never goes away” has been supported by the fanciful chart below, created by the Gates Foundation-funded Imperial College of London. 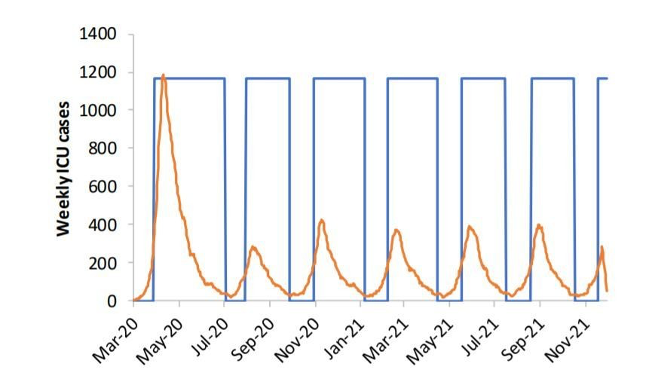 It suggests that, like clockwork, every three months for the next eighteen months, COVID-19 will return for a series of encores, making it necessary for the government to once again clamp down on freedoms in order to “keep the nation safe.”

No virus has ever behaved in this manner before, yet, under this notion, the globalists are really coming out of the woodwork, announcing an ever-growing number of new controls to cope with the anticipated encores.

Perhaps the most disturbing of these is the planned introduction of a federally funded tracking system for all citizens, to determine their locations 24/7 and to track their behaviour.

Those monitoring the system will then calculate “personal risk scores.” Those with insufficient scores may be quarantined and denied employment.

In addition, sufficient scores will be necessary in order to be allowed to travel, not only to other countries, but “locations like your neighborhood grocery store.”

If this sounds familiar, it should. It’s the Orwellian system that China relies on to control the movements of its people.

The system has been described in the US as being especially necessary, to control those who may refuse vaccination. After all, for those who use their constitutional right to decline to be vaccinated, a suitable punishment must exist, and that punishment will be a further loss of essential freedoms.

So, what sort of time frame are we looking at here?

Well, researchers hope to have a working app in place by August, with vaccines possibly coming later.

We cannot, of course, be certain that this will be in place by August, only that this is the operative date.

From that date forward, it would be advisable to presume that a tracking system will be in place and that “personal risk scores” will be in use.

At any time after August, it will be uncertain as to whether a given individual will be allowed the “privilege” to earn a living, to socialize… or to travel.

We cannot be certain that any specific individual will be refused the choice to “Get out of Dodge,” but we can be certain that, in the future, this will no longer be a right. This will become a privilege that will either be allowed or not, depending on the decision of a faceless bureaucracy to whom it may or may not be possible to appeal.

For those who live in any country where the laws are becoming ever-more draconian, this plan may serve as a warning that it might be a good time to plan a move to a country where the government is not contemplating such draconian measures.

However, in the US – the country that is now leading the way toward a more totalitarian state – those who value their freedom may choose to pick up sticks and beat a hasty exit, as the window to do so may soon be closing.

Those who prepare are less likely to become casualties of the coming crisis. I wouldn’t want to be locked into a city residence once the fur begins to fly.

Editor’s Note: The economic, political and social trajectory is troubling. Unfortunately, there’s little any individual can practically do to change the course of these trends in motion.

How will you protect yourself in the a coming crisis?

New York Times best-selling author Doug Casey and his team just released a guide called Getting Out of Dodge. Inside is his action-packed survival guide. Click here to download the PDF now.