Those Who Seek to Rule 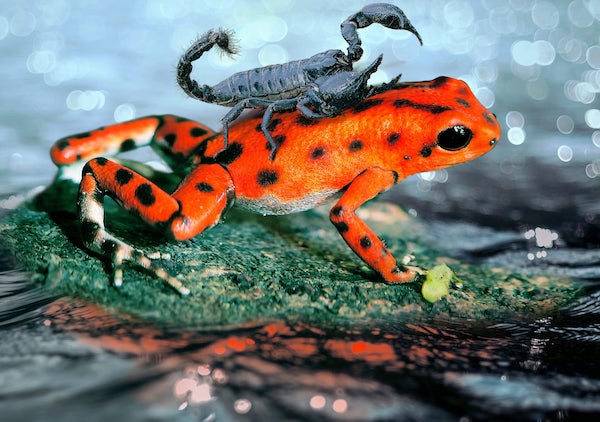 The reader may be familiar with the Russian parable of the frog and the scorpion.

A flood occurs and a scorpion finds himself on a small, dry patch of land, but will soon drown when the water rises. He sees a frog and says to him, “Please save me, I cannot swim. If I could get on your back and you swim to the higher ground, I’ll be saved.” The frog says, “But you are a scorpion – you might sting me and I would die.” The scorpion says, “That would be very foolish of me, for if I were to sting you, we would both drown.”

The frog nods his head and lets the scorpion climb onto his back. He swims toward the higher ground, but before they reach it, the scorpion stings him. As the frog feels the sting paralyzing him, he says, “What have you done, you trecherous fool? Now we will both drown.” The scorpion says, “I could not help it. It is my nature.”

It’s an insightful parable. People follow their nature. We should not be fooled into thinking that they will do otherwise.

Unfortunately, those people who possess these pathologies have a far greater drive to achieve power than those who do not. So, the longer a government exists, the more riddled with pathological types it becomes.

One of the shortcomings in those who are pathological is that they have very little patience for learning or understanding. They tend to place little value on the reality of a situation. They rely on dictatorial behaviour to obtain a desired outcome. So, for example, you have a president such as Donald Trump who doesn’t read books and knows little about history. He and his equally short-sighted support staff shout to other sovereign nations, “Get with the program, or we’ll destroy you.”

As simplistic as this statement appears, it can generally be counted on to hold true.

If a political leader has studied history, he’s probably learned that it’s extremely short-sighted to attempt to dictate to other sovereign nations. Although it may work, in small doses, for a limited time, if it becomes a general policy, it will create ever-increasing animosity.

In mid-2017, the US decided to impose sanctions against Russia, and, of course, the US has every right to diminish its trade with Russia if it sees fit.

But for the sanctions to work, Europe would have to endorse and enforce the sanctions as well, so the US government announced to the EU that its countries would be expected to fully participate in the sanctions.

The reaction from the EU was immediate: If they were to enforce the sanctions, Russia would most assuredly respond by diminishing their delivery of natural gas to Europe, which Europe cannot survive without. The EU pointed this out to the US, but Washington insisted that, as top doggie amongst the Western allies, it expected Europe to toe the US line.

This, of course, created an impasse for Europe. They wished to retain as good a working relationship with the Americans as they could, but not to the point that they lost their lifeline of natural gas from Russia. The leaders of France and Germany, Emmanuel Macron and Angela Merkel, personally went to Moscow to assure President Putin that they would not be party to the US sanctions.

Fortunately, this was handled quietly and did not become a media issue; however, the EU were warned that Washington did not take kindly to its directives being ignored.

In October 2017, President Trump announced that he was unilaterally breaking the Iran nuclear deal of 2015 without giving any consideration whatever as to whether any of the other signatories (Iran, China, UK, France, Russia, and Germany) were in agreement.

Once again, the other powers involved were rightfully angered at Washington’s increasing tendency to do as it pleased and its expectation that all others would simply fall into line. However, the other powers held their tongues in order to maintain peace with Washington.

Then, in mid-2019, Washington applied sanctions to Iran and once again announced to Europe that it expected them to support the sanctions. The sanctions that the US created were in no way harmful to the US. However, they were quite harmful to Europe, which depended heavily on Iran for oil.

Immediately, the UK, France, and Germany implemented the Instrument in Support of Trade Exchange, or INSTEX. This would bypass the SWIFT system, which presently acts as the clearing house for international payments. (Although SWIFT is centred in Brussels, it falls under the control of the US.) Almost immediately, Russia announced that it wished to sign on to the new system. China has not yet weighed in.

American officials have responded by issuing a warning to Europe that they are undermining Washington’s policy of “maximum pressure” to Iran, which is unacceptable to the top doggie amongst the Western allies.

So, what we see here is the US assuming that it can sign treaties involving multiple powers, then to unilaterally, not only back out of those treaties, but insist that the other signatories damage their economies in order to keep the US happy.

From an objective standpoint, most anyone would be inclined to say, “But if the US continues to behave in this manner, it will completely destroy its relationship with its allies. Then, when the time comes that the US needs them most, such as if the US were to go to war with Iran, it’s very likely that the Americans would find themselves with no allies. In fact, those allies would have every reason to side with Iran. That’s not a war the US could win.”

So, why on earth would Washington behave in such a cavalier manner? Well, we go back to the premise that the political class is made up primarily of pathological types who, by their very pathology, act rashly without thinking things through, then seek to enforce ill-conceived edicts out of arrogance and vanity.

Like the scorpion, they do so even to the point of their own self-destruction, because “it is their nature.”

Throughout history, every great empire that has ever existed has eventually collapsed. Invariably, the pattern is the same. The political class, increasingly, becomes populated with pathological types. They create massive debt, make promises to the electorate that they can never deliver on, overestimate their power internationally, then, finally, wage a war that they cannot win.

This final step almost always proves to be the death knell of the empire, for two reasons: first, because the empire underestimates the collective power and resolve of its opponents and, second, because, in the midst of war, it runs out of money, due to its pre-existing debt and the massive capital demand of warfare.

No one has ever succeeded in stopping an empire from destroying itself in this manner. The best that can be done is to get well away from the Goliath before it falls.

Editor’s Note: It’s clear the rivalry between the US and China is getting intense. The trend of increasing tensions shows no signs of slowing down. It could all be coming to a head soon… and that will have enormous economic and political consequences.

This is exactly why New York Times bestselling author Doug Casey and his team just released an urgent report showing you how to survive and thrive during an economic collapse. Click here to download the PDF now.