The War for Dependence 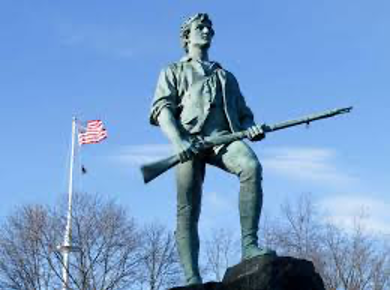 In 1776, residents of the American colonies took the very risky step of going to war with a then-powerful Britain – a War for Independence.

At that time, it was quite a courageous act, one that was a direct result of grievances:

Taxation: Colonists were angry over increased taxation, which at that time was only about 1%. But they got little in return, as the UK did not defend them against the native Americans. Colonists were instructed to sort out their own protection.

Production: The colonists were also angry because most of their export product went to the UK and they were paid very little for it, whilst goods shipped from England to the colonies carried a high price, which often left the colonists in debt to English exporters.

Self-determination: But they particularly resented the fact that, although the colonies functioned quite well on their own, and local representatives in the House of Burgesses were entirely capable of establishing law for the colonies, the UK made the bigger legislative decisions. These decisions were often regarded as arbitrary or usurious.

In going to war with England, the colonists took a great risk – declaring war against a country with the world’s most well-trained army, when they themselves only had training as guerilla fighters. They also possessed little actual money to finance a war. Most of their silver reales ended up in England, in payment for goods.

But the reward was potentially great: the opportunity to be self-determining and to enjoy the fruits of their labours themselves.

This was a revolution of a people that were seeking to be self-reliant.

Today, some 244 years later, America has begun a rebellion that may evolve into a war of sorts, yet this war would not be as straightforward as the War for Independence.

This war would be quite the opposite – a War for Dependence.

Taxation: This time round, Americans are not complaining about excessive taxation, although the tax level is far beyond that of America circa 1776. In fact, they don’t object to increased taxation, if it may result in greater largesse from the government.

Production: Another contrast is that America is no longer a net-exporter. The nation has ceased to be productive and now consumes far more than it produces.

Self-determination: The colonies in the eighteenth century had been very sensible and responsible for the most part as regards legislation. Politicians were locals, arguing in favour of benefits for locals, whilst the “central government” – Britain – was in no way representative and passed legislation that was both arbitrary and usurious.

Today, both state and federal government are utterly corrupt and are part of the same dysfunctional system. All levels of government are parasitic and are in no way representative. This is equally true regardless of political party, although many Americans imagine that one party is somehow less corrupt than the other.

So, logically, it should not be surprising if the people of the US were to wish to topple the government, as Thomas Jefferson recommended, in order to return to diminished taxation, increased production and self-determination.

But in fact, the opposite objective is sought by protestors.

Roughly half of all Americans now seek greater dependency upon the government that has been milking them all their lives. And the other half do not seek the opposite goal of minimal government and self-reliance. They are verbally opposed to socialism, yet, without understanding it, they favour a milder form of socialism – a sort of “socialism-lite.”

The rebels are behaving in extraordinarily irrational ways. They rail against “systematic racism,” yet their claims of racist atrocities are in no way borne out by actual statistics. Their reaction has been to ignore the statistics and maintain their incorrect claims.

They protest heavily for the defunding of police, yet protest organisers file written requests for police presence to ensure their safety at protest events.

And those politicians who support the rebels and have voted for defunding police have increased their own personal armed security at the expense of the taxpayer.

The rioters have developed a penchant for tearing down statues. This began with statues of Confederate soldiers, but has now expanded mindlessly to the destruction of anti-slavery heroes such as Abraham Lincoln and Frederick Douglass.

But underlying these demands, today’s rebels demand free college for all, a guaranteed basic income, free health care, and a host of other new benefits.

This is a revolution of a people that are seeking to be dependent upon others.

It matters little which statue goes down. The idea is destruction – any destruction will do. This is true of all property, personal or otherwise. Rioters have no concern for which buildings get torched, whose cars are burned. The object is to destroy, not create.

And the cost of the demands now being made is so great that, even if the rich were to be taxed at 100% of their income, the revenue would not be sufficient to pay the bill.

This is a collectivist revolution, one in which one group of people – those in the majority – demand that the other group pay for whatever the first group’s desires may be. This is a War for Dependence.

So what will the outcome be?

Well, the War for Independence was a logical one – a quest for self-determination. If such a revolution succeeds, those who seek only to be free to enjoy the fruits of their labour have a good chance at success, following the war.

However, historically, in every instance in which a war – however large or small – was fought for dependence, the outcome has been that the conquerors were more autocratic and domineering than the previous rulers and the increased dependence resulted not in increased largesse, but diminished benefits and eventual poverty.

So how will this one end? Will more sensible heads prevail? History suggests that that will not be the outcome. A mild war would end with the existing government still in control, but with their control enhanced, to the detriment of all citizens.

An overturning of the government is less likely, but should it happen, history again informs us that the outcome is likely to be a new government that is significantly more oppressive than the existing one.

The party is just getting started and the reader may well feel that this one will not end well. The statue in the image above will be coming down, both literally and figuratively.

Then the cat’s out of the bag. It’s all over for the Old America. Even if we don’t have an actual civil war.

It’s contributing to a growing wave of misguided socialist ideas.

New York Times best-selling author Doug Casey and his team just released a free guide outlining what it’s all about and what comes next. Click here to download the PDF now.