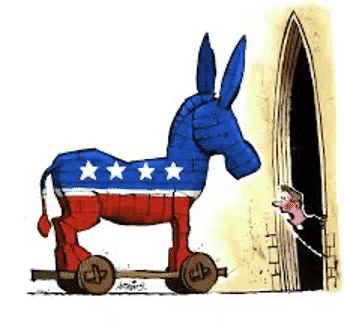 Since earning the nomination as the 2020 Democratic candidate for the presidency, Joe Biden has stated that he is a “transition candidate.”

This was an odd statement, especially for someone who has hardly begun his formal campaign. (He’s not even in office yet and he’s discussing being on the way out?)

Yet this was not just another one-off Biden gaff, as has been suggested by some. Since announcing his pick for vice president, he has stated, “Look, I view myself as a bridge, not as anything else.”

So what’s up here? The candidate is only a place-holder for the real, intended president?

Well, let’s have a look at that possibility.

Joe Biden, by any measure, is a poor candidate for the office. After almost half a century in politics, he’s had a career mostly as a political hack who would support any issue that seemed popular at the time. Similarly, his voting record in the Senate has been that of a man who supported whatever bill would please his peers and further his career.

Seemingly, he either has no inner core of belief, or he’s been willing to sacrifice it at a moment’s notice, if it might help his next election. After forty-seven years of elected office, he’s not regarded as having a commitment to… well, anything.

And yet he became the choice of the Democratic party as one candidate after another dropped out of the presidential race. Clearly this was a party that was not only leaderless, but couldn’t even seem to invent a leader for the sake of the election.

Kamala Harris, his presumptive vice president, dropped out of the presidential race in December 2019, when her popularity amongst democrats dropped to 3.4%. Since democrats make up roughly half of the population, this means that less than 2% of Americans would have wanted her as their president.

And yet, as stated above, candidate Biden announces, “Look, I view myself as a bridge, not as anything else.”

That’s quite curious. He apparently is stating that his only purpose is to win the election, then pass the baton to the next leader. Presumably, his vice president.

This has never occurred in US politics, although it is true that, at this point, Mr. Biden may well be too far gone to even begin to handle the job.

And that leads us to the possibility that the deal has already been brokered – that Mr. Biden would win the election, then have, let’s say, a “medical emergency,” at which point he would pass the reins to the new president – Kamala Harris.

Clearly, Ms. Harris could not have been elected on her own merit, as even democrats found her to be fundamentally lacking last December. Even the more radical elements of the party have sensed that she is untrustworthy and even dangerous.

At this point in America’s history, there’s much debate as to whether the president is the supreme leader, or whether he or she is merely the face presented by the Deep State, who run the country from the background and give the president his marching orders.

Either way, this eventuality would not bode well for the US. As supreme leader, Ms. Harris, based upon her reputation, would be an autocratic figure who behaved rather ruthlessly toward those who failed to comply with her edicts.

But as the figurehead for the Deep State, she would be a very powerful tool, implementing the loss of freedoms that were passed into law with the 2001 USA PATRIOT Act and the 2011 National Defense Authorization Act.

These two acts, taken together, essentially eliminate the US Constitution in practical terms. All that’s necessary to implement them would be for a highly demonstrative president to declare a national emergency. Both acts would then be in force.

It would not be difficult to imagine Ms. Harris in this role.

Presently, we’re watching a very odd set of events unfolding in the US.

Major cities have seen months of continual protests and even rioting, which apparently have been very organized and well-funded.

In a normal situation, the mayors and governors would call in the police to quell such riots.

Yet we’re seeing the opposite. Local political leaders are consistently hamstringing local police, making it impossible for them to do their jobs, thereby increasing the extent of devastation by rioters.

Rioters are routinely let off with a slap on the wrist, whilst those who defend their homes from rioters are arrested and charged.

This, of course, is the exact opposite of what the Rule of Law is meant to achieve.

There’s every reason to believe that this condition will continue to worsen well after the 2020 election, and at some point, Americans from both the right and left will find themselves begging for the federal government to step in – to return the US to a state of relative safety.

Central governments, of course, perennially dislike local policing, as local police tend to be loyal their own communities. However, federal troops have no such loyalty. They perform as their superiors dictate, regardless of where they are deployed.

But once the local police have been gotten out of the way, it would be quite easy for an authoritarian president to deploy federal troops to re-establish order, and initially, this would meet with the approval of worried Americans.

Historically, this has occurred countless times throughout the world. In every case, martial law is instituted as a “temporary measure,” to quell existing unrest. But, as Milton Friedman said, “Nothing is so permanent as a temporary government program.”

If this development is in America’s future, as events indicate, it’s likely that the media will repeat the words, “public safety” endlessly as the situation unfolds. The words “martial law” and “police state” may be heard amongst some of the populace, but will be unlikely to dominate the news programmes.

Another word that’s unlikely to appear often in the media is “tyranny,” yet this will be precisely the result of the introduction of a police state.

But all the above is dependent upon a political leader who has the forceful demeanour to ensure that the job gets done with a minimum of dissent.

The American public are therefore left to ponder whether it may be that a vastly unpopular Trojan donkey may be closer to the presidency than she presently appears.

That’s exactly why bestselling author Doug Casey and his team just released a free report with all the details on how to survive the crisis ahead.