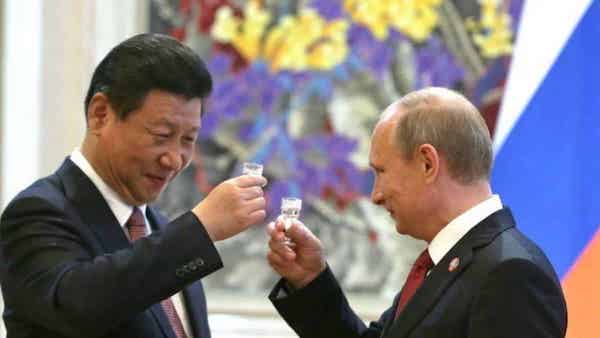 Pozner has hosted several shows on Russian television, where he has interviewed famous figures such as Hillary Clinton, Alain Delon, President Dimitri Medvedev and Sting.

Pozner has appeared on a wide range of networks, including NBC, CBS, CNN and the BBC. He has worked as a journalist, editor (Soviet Life Magazine and Sputnik Magazine) and TV and radio commentator in a long career covering many major events in Russia.

Pozner has appeared on The Phil Donahue Show and Ted Koppel’s Nightline. He has also worked for the Institute for US and Canadian Studies, a Soviet think tank.

He co-hosted a show with Phil Donahue called Pozner/Donahue. It was the first televised bi-lateral discussion (or “spacebridge”) between audiences in the Soviet Union and the US, carried via satellite.

In 1997, he returned to Moscow as an independent journalist.

Doug Casey’s friend Mark Gould sat down with Pozner in Moscow to help us better understand the relationship between the US and Russia.

International Man: Do you see a resurging Russia and a restoration of Russian Empire, or simply a national state resurgence?

Vladimir Pozner: Certainly not. Russia is not a resurging empire. There is no way it’s ever going to be an empire again.

Empires have this universal feature of disappearing forever, whether it’s ancient Rome or whether it’s the UK or whatever. Once it’s gone, it’s gone.

It’s not going to come back, and people have to come to terms with that. Russia has been an empire since the days of Peter the Great— we’re talking about the 18th century. It is used to being an empire. The Soviet Union was an empire.

The loss of an empire is painful. It’s like when you lose a leg but have phantom pains—the leg isn’t there, but it still hurts.

Well, that’s what’s going on. Psychologically, it’s difficult to accept. So, you have a certain degree of nationalism, chauvinism—and it’s part of growing out of what you were once upon a time and becoming something else.

Is that happening in Russia? Yes.

Is it painful? Yes, it’s painful. Is there a deep divide between the older generation and the younger generation? There’s always a divide, but in this case, a very deep divide.

It’s because the older generation is a Soviet generation that was brought up in the Soviet Union, that went to Soviet schools, that was created by a society that no longer exists.

The younger generation grew up in a different kind of place. It could travel, it has the Internet, it can watch whatever movies, read, whatever books, whatever newspapers, whatever it wants. It is independent in the way it thinks, as differing from the older generation.

There‘s a real divide between the two. It‘s not until the older generation who are in power today are gone—and those who today are 18, 19, 20 come to power—that the real changes will begin to occur in this country.

It‘s a gradual, very difficult change, but nonetheless, it‘s happening. I can see it.

I travel a lot around Russia, and when I speak the places are packed, and most of the people, much to my surprise and gratification, are under 30. To put it bluntly, I‘m not young, and yet about 80% are young people.

When I‘ve asked myself, why is it? What do I say that attracts them?

What I think it is, they see that I tell the truth.

I don‘t beat around the bush, and I ask questions to make them think, not to accept. I always say, “Don’t accept what you’re told. Think about it; doubt it”; that kind of thing.

International Man: How do Russia’s actions, say in the Middle East, reflect this, for instance in Syria or the theoretical pulling of American troops out of the Middle East?

How do you see Russia vis-à-vis Iran and China? Are the days of Pax Americana, indeed, coming to a close?

Vladimir Pozner: For me, the problem is this: If you have a country like Iraq or Syria, you have local people living there. What goes on in that country, in my opinion, is strictly their business.

It would be a good thing if no other country felt the need to interfere in the business of another country. However, that’s not the case. Certain countries have so-called global interests.

The Soviet Union had its global interest. It had a lot of influence in the Middle East and the surrounding area—which is much closer to it than the United States.

When the Soviet Union disappeared, there was a vacuum. The United States immediately moved into that area because it had its global interest.

When Russia started coming back in—in the case of Syria—first, the Americans went in supporting the opposition to Bashar Al Assad, and then the Russians came in supporting Assad.

So, what you have is these two countries—plus China, in a different way—trying to further what they consider to be their global interests at the cost of local people. The local people never asked them to come in the first place.

The only reason you go in is that you’re stronger than they are.

You don’t go into China, for instance, because you don’t like the system, and you don’t even go into North Korea for a very good reason because you’re afraid you’ll get a bomb on your capital or something.

This whole idea of global interests, to me, is a profoundly provocative and dangerous idea that can lead to serious military conflict.

The Russians fought there for a while, and they also had to get out. Isn’t that a lesson?

How many times does this have to happen before you understand that well, we may not like what’s going on in that country, but it’s just none of our business.

There can be very specific, rare cases when the United Nations might say we must interfere. For example, when there is some kind of genocide. That has to be a decision of the UN, not of the United States or the Russian Federation or the Chinese People’s Republic.

It has to be the United Nations—all together unanimously says, yes, we must interfere.

That’s legitimate; otherwise there should be no such things as global interests.

International Man: Russia has been building alternatives to Western-dominated systems. This includes measures to protect itself from sanctions involving the US financial system, an alternative to the SWIFT system, alternative trade deals with other BRICS countries, the Eurasian Economic Union, and integration with China’s New Silk Road program.

What are the implications for this?

Vladimir Pozner: I’m not an economist, and so I prefer not to discuss issues that I don’t really know very well.

One thing I will tell you, the turning of Russia towards the East, towards China, is not something that was done voluntarily. It is something that is the result of, first and foremost, the United States making clear that it would not agree to trade with Russia on an equal basis—it would not regard Russia as an equal partner.

In fact, it would employ sanctions to punish Russia. In a way, it kind of forced Russia to look the other way.

Ultimately, this could lead to some very profound changes in the world situation because if you have a trading block that consists of Russia, China, India, and the Arab nations, you’re really changing the status of the world.

Although I’m an atheist, but nonetheless, I fully understand the implications of coming from a Judeo-Christian past heritage, which is very different from what you will find in the East, be it Confucianism or Muslim or Buddhism or whatever.

I don’t think that there can ever really be the kind of deep understanding.

I put it somewhat vaguely, West and East—after all, East is East and West is West, and never the twain shall meet.

In that sense, I think Kipling had an important point. I don’t know where this is going to lead. I’m not particularly fond of that, but again, I place it squarely at the doorstep of the United States.

It’s a forced move because if you’re told, “Well, we were not going to deal with you.” Then where do you go?

International Man: Amid the poor relations with the US, Russia has strengthened its relationship with China. The two countries have increased their economic, military and political ties. How does this impact US hegemony in the world?

Vladimir Pozner: I think that the leading factor here is China, not Russia.

China sees itself historically at the center of the world. Today, it views itself as the fastest-growing powerful nation that, by the middle of this century, will be number one in every possible respect: militarily, economically, etc.

Russia has a much closer relationship with China, historically, than does the United States.

Russia has a huge border with China, and it is much more dependent on China than the United States is.

I think that the Russian leadership understands the need to create as many positive relations with China as possible, looking down the road as to what’s going to happen.

There could have been a US-Russian entente, if you will. That would have stood in the way of Chinese hegemony, but that is not happening.

The Chinese have a very long memory, and they’re not forgetting who was doing what. I would say that what the United States is doing is very shortsighted vis-a-vis China.

International Man: In a number of your talks or discussions over the past several years, you’ve stated your purpose as a journalist of bringing about more understanding between the 2 countries.

Considering the tensions that have arisen in the past 6 years, is there actually a path towards better understanding?

Vladimir Pozner: I think it’s possible, but it’s hard to imagine that happening in the short term, because for that to happen, there has to be an understanding on both sides—that this is necessary and in the national interest of both countries.

One of the grand ideas of course, is for instance, on a yearly basis to exchange, say 10,000 kids between the ages of 9 and 12 to live in the homes of each other—and to go to the schools of each other just for one year, and then go back home.

That in itself would play a stupendous role in changing outlooks or even informing outlooks. If you did that for 10 years, you’d have 100,000 of those, and those are the people who would be able occupy important posts in the future.

Today, I know for a fact that the Russians are open to it, the Americans are not.

I proposed this to Channel 1, they said, if the Americans are willing to, we’ll do it.

This face to face contact is extremely important in changing attitudes. We saw that happen back in 1985. It could happen again, but the basic underlying thing is an understanding on the part of both sides that this is something we need. It’s good for us. It’s good for others too, but we’re not talking about others.

We’re egoists, it’s good for us.

What I’m waiting for, and I don’t know whether I’ll live long enough for this to happen is for the leadership on both sides to come to this conclusion.