The Price of Freedom Comes Down

In 1984, St. Kitts & Nevis offered, for the first time, Citizenship by Investment, or CBI.

The idea was that, through an on-island real estate investment of $400,000, or a one-time “donation” of $250,000 to the government, a non-Kittitian could receive citizenship within a few short months. To gain citizenship, he would not be required to live in the islands, nor even to visit them. But his new citizenship would allow him to live there if he chose to do so, without obligation to pay any income or capital gains taxes locally. In addition, his new passport would be honoured in 132 countries, providing him with tremendous freedom.

Not surprisingly, the programme was inspired by the knowledge that many countries in the former “Free World” have become increasingly rapacious as regards their citizenries.

As is always the case historically, when once-powerful nations find themselves in a state of decline, rather than correct the problems they have created, governments tend to squeeze their people even harder. Many of those people then seek a means by which they can exit the clutches of their governments, but the lack of a second passport often enslaves them to the country of their birth.

Not surprisingly, the Kittitian CBIs were frowned upon by those countries that people hoped to be freed from. Canada and the US in particular sought means to claim that the programme was somehow illegal under international law or that it violated humanitarian principles.

Interestingly, although there have been repeated attempts to stop the islands from providing CBIs, they have repeatedly failed. Although St Kitts & Nevis is a small nation, its powerful neighbours to the north were unable to defeat the programme. The only success they achieved was to demand that, after 2012, the Kittitian passports contain the birthplace of the holder so that, should he return to his native country, Immigration would be alerted to the possibility that he might still retain his first citizenship.

This fact is important, as it informs us that the great countries to the north accept that to attempt to freeze out the little island country or come down heavily upon it would be a non-starter internationally. Therefore, the programme has been and remains a valid national policy in diplomatic terms and the possession of a Kittitian passport is likely to continue to provide a layer of freedom to those who possess it.

From my own experience in St. Kitts & Nevis, my advice to their government has been that they consider awarding a variety of citizenships – voting and non-voting – with a different cost associated with each. Those citizenships that carried fewer rights would cost less.

Although the Kittitian government has been reluctant to follow this path, for fear of having large numbers of foreigners gain the vote in a country of only 52,000 people, my belief was that the CBI concept would catch on elsewhere. Other islands would offer CBIs and, as is always the case when several entities offer a similar product, prices will come down.

We have now reached that juncture. Some twenty countries offer some form of CBI, including some of the powerful nations that once objected to it. (If you can’t beat ’em, join ’em.)

And that’s what has triggered the drop in price.

Dominica – a country with a minimalist economy, became the first country to offer citizenship for $100,000. After all, they really had very little to offer as a place of residence, so they compensated for that fact by offering a bargain price on their CBI.

This has changed the rules dramatically. Prices have dropped in the other islands. 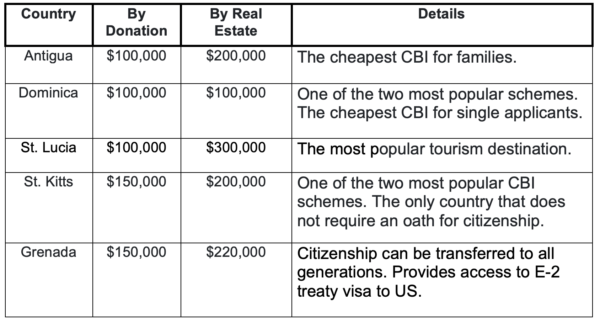 CBIs are available in some European countries but tend to be pricier. For those who are not seeking to become a part of the EU, the Caribbean countries tend to offer greater independence from political turmoil.

In addition to reviewing the above, those who seek the freedom provided by a second passport would be advised to research each of the above nations (and others who provide CBIs) to examine social climate, stability of government, taxation, crime level and amenities available. If possible, a bit of island-hopping would provide a fuller grasp of local pros and cons.

Whether or not you wish to live in your new country, the livability of it may determine whether it has a promising future in a world that’s presently undergoing great upheaval. This is particularly relevant for those considering the real estate option.

The decision to shell out $100,000 or more for a second passport may, at present, seem to be rather extravagant, but considering the increasingly totalitarian direction that many of the former Free World countries have been taking as their economic structures unravel, a CBI may one day soon prove to be essential if an exit from your birth country becomes advisable.