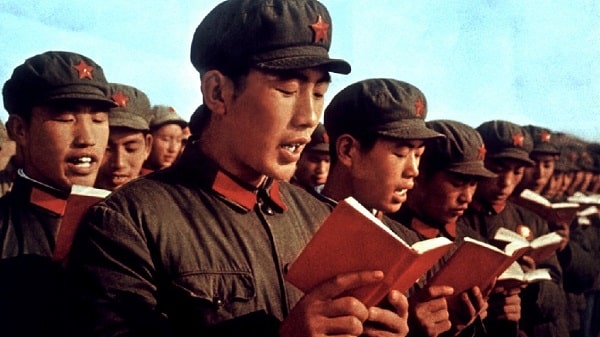 Mao Zedong was, by all assessments, not the nicest fellow.

In 1964, he published “Quotations from Chairman Mao,” which came to be known to all and sundry as “Mao’s Little Red Book.”

At first, it just went out to the military, but by 1966, it gained far wider distribution. The goal was for “ninety-nine percent (of the population of China) to read Chairman Mao’s book.”

To be objective, it’s not a great read. It’s merely a collection of rhetoric, intended to indoctrinate the people of China as to “what’s expected of you.”

From time to time, someone from the West will quote a particular passage, but one reference that Chairman Mao made that has escaped notice is his reference to “the people’s democratic dictatorship.”

This little-noticed description is, to my mind, an exceptional example of totalitarian rhetoric. Those four words are so self-contradictory that they’d impress both George Orwell and Joseph Goebbels.

But the Chairman does an excellent job in the book of describing how democratic his dictatorship is, as he claims to have the overwhelming support of the people. He presents himself as the absolute embodiment of the Chinese, which is why those who question his authority must be either re-educated or put to death.

Sounds fair… After all, such people didn’t betray the Chairman so much as they betrayed all the people of China.

Thankfully, this level of tyranny, coupled with this level of rhetoric, doesn’t exist in the West, where a more moderate view is prevalent.

In the fifth century BC, Socrates argued that all human beings are equal by nature. Laws and institutions such as slavery were therefore to be regarded as contrary to nature.

Plato and Aristotle expanded on this concept, stating that the cornerstones of humanity were liberty, equality and justice.

In 1215, King John of England consented to the Magna Carta, a document that defined the rights of Englishmen. The very idea of this caused a war to be fought, but the Magna Carta survived, and was eventually adopted into statute law.

Then, in 1776, a young man in the British colony of Virginia drew from both the principles of the Sophist School and the Magna Carta, enlarged upon them and came up with the Declaration of Independence – possibly the most civilized formative document the world has ever seen.

Today, in the post-constitutional era, US political leaders still applaud their founding document publicly, whilst continually passing legislation to nullify it.

True democracy is, in fact, a dead duck in the US. Americans today either rave over a republican candidate who, in normal society, would be regarded as certifiable, or they rave over a democratic candidate who is no better. The obsessive knee-jerk praise of clearly undeserving and unqualified candidates is ample evidence that the people of the US chronically must choose between “the lesser of two evils.”

This phrase was first uttered by Odysseus in choosing between Scylla and Charybdis, but is no less true with regard to political choices today.

And to be fair, the US is not alone in this unhappy condition. Those of us who are British are in no position to say that we’re any better in our choice between Labour, Tory and an assortment of boutique parties. The Brexit fiasco has demonstrated just how dysfunctional the British democracy has become.

But to be certain, no organisation in the Western world is more of a “democratic dictatorship” than the European Union (EU).

The EU is unelected, yet has final say over the futures of twenty-eight countries in Europe. Although the populations of those countries can vote for their national leaders, the elections mean little when the winning candidates say, “Gee, I’d like to fulfill my campaign promises, but the EU says no.”

The Brexit process has revealed just how insincere these claims by national leaders are.

Mark Twain is famous for having said, “If voting made a difference, they wouldn’t let us do it.”

Those of us in the West tend to look upon Chairman Mao, or indeed his successor, Xi Jinping, then look at the political hopefuls on our television and resolve to be grateful that the lack of true democracy in our country is not worse, as it is in China.

But is this the best way to view our situation? Should we not go further and assess also those countries where the governments are more representative than our own?

Certainly, diminished rhetoric and tyranny suggest a greater level of democracy and representative government. And a country where the electorate are actually pleased with the actions of their elected leaders is most certainly a country where the greatest freedoms are likely to exist.

Some people may be stuck in a country such as, say, North Korea, where tyranny is extreme, but, in fact, hundreds of millions of people reside in the EU, US or other jurisdiction where the level of tyranny is somewhere in the middle.

Those people have the choice to seek an even better quality of life. Should they overcome the resistance to uprooting themselves, they may actually choose greater freedom and opportunity in one of the countries where it’s the norm.

Editor’s Note: Misguided political and economic ideas have taken hold around the world. Democracy isn’t the solution. In all likelihood, the public will vote itself more and more “free stuff” until it causes an economic crisis.

With the increasing prospect socialists will gain power in the US, it’s all coming to climax soon. That’s precisely why bestselling author Doug Casey oug Casey just released Surviving and Thriving During an Economic Collapse an urgent new PDF report. It explains what could come next and what you can do about it so you don’t become a victim. Click here to download it now.