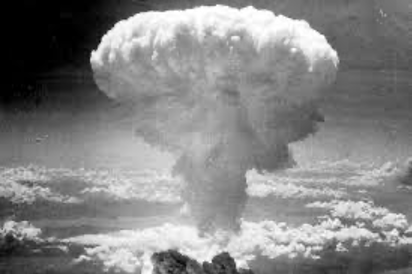 On sixth August 1945, the US dropped the world’s first nuclear weapon on Japan. Not surprisingly, the devastation that it caused changed the way the US looked at its power in the world. That perception has never changed since.

For Americans, though they may not know it yet, the 2020 presidential election will be an atomic bomb of sorts.

It will purposely be designed to be a close race and the stage is being set to ensure that, whoever the losers are, they will be hopping mad – convinced that the other side rigged the election. Both Democrats and Republicans have been pre-conditioned to believe that this is the big one – the one that will decide whether the US is controlled by Good or Evil.

Roughly half the population is now convinced, courtesy of the polarising media, that the sitting president is pure evil and that they’re doomed if he is re-elected.

And the other half of the population is convinced that the challengers are evil and will doom the country if elected.

What’s being overlooked by each side in this quandary is that they’re both correct. The US is doomed to a socio-economic crisis, regardless of the outcome of the election.

But why should this be? Admittedly, all is not well, but surely this can be remedied?

Well, unfortunately, no. In 1971, the US went off the gold standard, which had ensured that the dollar was actual money. Once it was only paper, with no gold backing, the dollar was merely a promise – no more.

As long as other countries were prepared to treat the dollar as real money, the ruse could continue. And that’s just what occurred. For decades, the US printed more and more dollars, which allowed a spoiled US to operate far beyond what was economically reasonable.

Today, the US debt is beyond any possible redemption. A collapse is, if anything, overdue, and when it comes, it will arguably be the greatest crash in history.

The fallout will be devastating. What remains of the middle class will be largely destroyed.

This does not appear to be understood by most Americans, but it’s clear that, at this point, they feel in their gut that something is dramatically wrong, even if they can’t put their finger on it.

And the media’s handling of the upcoming election plays directly into that fear. Liberal voters are being programmed to not only disapprove of conservative voters, but to literally hate them. And conservative voters are being programmed to hate liberal voters. America is now at the point that families can no longer get together for the holidays without heated arguments ensuing between those of differing party loyalties.

In the run-up to the election, we shall see increased tensions, which will be played out on the evening news – media hosts vilifying the opposing party in the strongest possible terms – plus, on the city streets, violence and destruction that’s steadily escalating.

But despite all the unrest, I contend that we are now living in the quiet time.

At present, each half of the electorate vainly hopes that the opposing bogeyman will be defeated and all will be right with the world.

This will not happen.

The stage has already been set for the electorate to believe that ballot box fraud will take place. Each side is accusing the other well in advance of election day.

More than in the 2016 election, the entire population is being prepared to be enraged over whatever the outcome will be.

It matters little which cardboard cut-out of a candidate is elected. Come fourth November, we can expect to see televised reports that there have been numerous errors in the voting. Each side will accuse the other of stuffing the ballot boxes, mailing in false votes and improper vote-counting at the polling stations. In every state, the accusations will be rife – and they’ll be aimed at each party by the opposing party.

Far from resolving itself through a recount, or whatever other method is employed, this issue will prove impossible to resolve.

The supporters of each party will claim that they are the true victors. Regardless of which party is declared the final “winner,” the anger will not subside. The winners will gloat and the losers will rise up to a new level of fury.

It will be after that that the real chaos is likely to begin.

But is this not mere conjecture? A fanciful “What if?”

This is much the same as a “planned demolition.” The US economy is on the cusp of a government-created economic crash, and whenever governments find themselves facing a crisis of their own creation, the standard procedure is to create a distraction, so that the blame does not fall on them.

In a case where the crisis is a major one, a major distraction is needed. Above all, the people must be made to blame each other rather than blame the government itself. When an entire people realise that their government has destroyed their lives, they tend to rebel against the government. Therefore, the government must create as much hatred within the populace as possible – ideally a 50/50 hatred in which the two opposing sides are as close to equal as possible. This would ensure that each side will be committed to the notion that, unless they maximise their ire, they’re in danger of becoming the losers.

The warnings are already in place and are escalating. The president has warned many times, publicly, that he will not accept an electoral defeat, stating that, if necessary, he will place police at polling stations.

Likewise, his opponents have made claims that the president plans to keep his opponents from voting, even to the extent of removing mailboxes so that mail-in voting cannot be done.

In case this warning does not generate the necessary anger, the president’s opponent in the last election has issued a strong statement that her party must be just as aggressive in maximising their position as the president and his party.

Surely, this will be a heady election season, but the real furor will begin after the election. As unlikely as it may seem, what we are presently viewing is the calm before the storm.

This is no accident. The reader may wish to ponder whether the powers that be are pursuing a larger agenda – a change in US governance, ushered in by a divisive nuclear election.

That’s exactly why bestselling author Doug Casey and his team just released a free report with all the details on how to survive the crisis ahead.