The Noble Metals: Hard Money and the 79th Element

We’ve all heard the macroeconomic arguments in favor of owning gold.  Today I want to talk about the scientific (chemical) reasons that separate gold from all of the other metals in the periodic table.

First, gold is inert, which means it’s very inactive. It does not react with oxygen like iron does (think rust).

That makes gold an excellent store of value.

If all the elements in the periodic table were characters in a reality TV show, gold would easily be the most boring.

Why? Because gold is inert. It doesn’t hook up with anyone.

Let me explain why this is important—chemically speaking.

The Alchemist’s History of Hard Money

There are 118 elements in the periodic table, of which gold is one.

Take away the 17 gases (gases are of no value for this exercise).

Also remove the six metalloids, which are elements that don’t know whether they are metals or non-metals since they have traits of both (e.g., antimony, arsenic, silicon).

Thus, we end up with ninety-five elemental metal contestants on our Currency Reality Show.

Note: For the chemistry nerds among us, I don’t count Oganesson and antimony as metals—call me old school. There are ninety-five metal elements in the periodic table.

Of the ninety-five metals in the periodic table, eighty-five are “active.” This means they are fun to watch on our reality TV show because they are always hooking up with other elements.

But remember that activity always results in oxidation or corrosion.

If you want a metal for long-term storage value, you don’t want it to change. You want it to hold its own, maintain its integrity, and not degrade.

Iron, for example, has many useful applications, but it oxidizes and then rusts. Iron is active, and it would be fun to watch its decay on a reality TV show for entertainment value.

But it’s bad if you want to use it as a currency. The coinage will rust away. And the last thing you want is a metal that debases itself.

Politicians and central bankers don’t need any help doing that; they do a wonderful job of debasing currency on their own.

So that leaves us with what are known as the “noble” metals. Just like there are noble gases (noble meaning “inert”), these metals are not active.

I want you to think of the noble metals as the royalty of all metals. They don’t interact with the peasants—the other elements on the periodic table that are always “interacting” with others and debasing themselves.

The noble metals in chemistry are the following:

Historically, copper, silver, and gold have been known as the coinage metals. And scientists deem these three the “real” noble metals because of their electronic structure.

Copper does react with oxygen, which is where the Statue of Liberty got its bluish-green color.

But the result of copper interacting with oxygen is not corrosion, like rust. It’s the exact opposite. The process is called “passivation,” and the bluish-green color is actually a layer of protection that protects the copper from natural debasement.

That is why copper is included in the noble metals. It does “interact,” but it doesn’t corrode. This interaction acts as a protective barrier for the copper but changes its appearance.

Silver is a bit kinky, too. It reacts with sulfide gas in the atmosphere, which causes it to look tarnished.

Removing the tarnish is natural debasement. Every time you polish the silver to get rid of the tarnish, you will be removing some silver, thus debasing it.

The remaining noble metals just aren’t practical for use as a store of value.

Not only are they hard to smelt and difficult to work with, but they are also too scarce in nature to be able to meet the need as a store of value.

And they all look kind of ugly. Think silver, but without the sexiness and brightness.

A blah gray is what the platinum group of noble metals look like.

In fact, all the metals on the periodic table of elements except copper and gold are a variation of gray. Silver is at least a sexy version of gray. The rest are just variations of a dull gray.

So That Leaves Us With Gold…

Gold’s beautiful color is not only unique on the periodic table, but it also will not change. Gold doesn’t mess with the peasant metals or with the other nobles. Gold does not react with any other element.

And ultimately, that is why gold will always be the king of all metals—and the currency of kings.

Everyone loves gold. Nobody dreams of winning a bronze medal at the Olympics. It’s the gold medal they want! There are thousands of analogies engrained in our subconscious, passed down to us through our families and societies, why gold is the king of metals.

And it’s the only metal that serves its purpose as the best store of value.

As I have written several times over the past few months, I did not expect gold to be a one-way trip.

Gold has risen 47 percent, or $600 per ounce, in fewer than two years. Taking some time to consolidate before moving higher is important.

In Katusa’s Resource Opportunities, we’ve highlighted three resistance points above $1,900 per ounce that gold needed to hold above, which it failed to do so.

In addition, $1,900 per ounce was a line in the sand, which gold has broken below.

In the graph below, you can see that the red trendline remains intact and has acted as resistance since August.

So what’s going on?

The USD continues to play its role in the price of gold.

On the heels of enormous stimulus packages, the USD has faced high-short sales pressures. The graph below shows the current USD positioning. 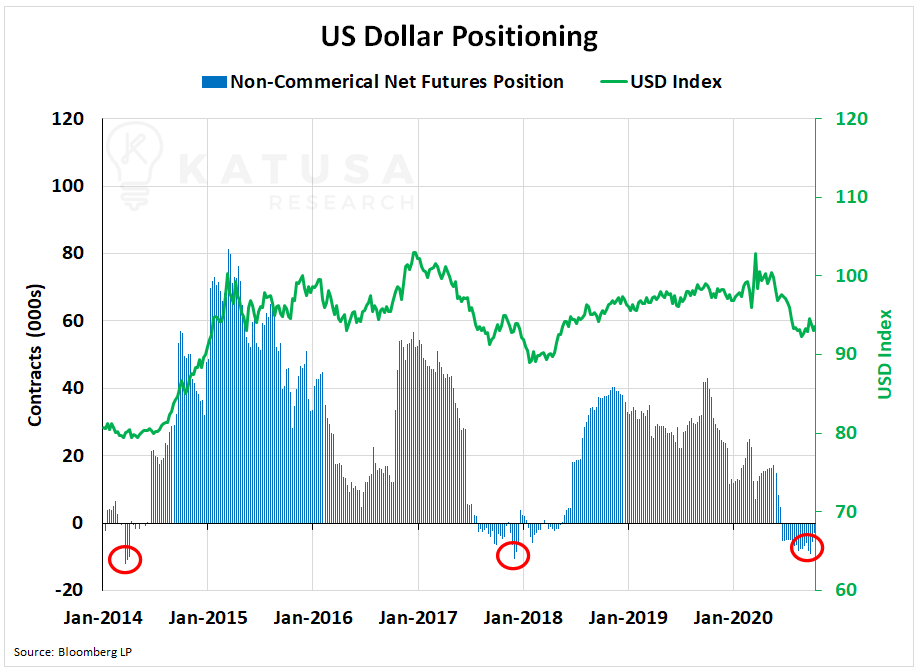 According to the CFTC, over 9,000 contracts are currently short the USD.

This has only happened two other times since 2014. Both times, the USD has subsequently experienced a sharp rally.

A rally in the USD would be a headwind for short-term gold prices.

Regardless, I expect the gold market to remain volatile over the coming weeks.

Make no mistake; you can use this volatility to your advantage.

If the USD rallies and takes the wind out of the supercharged gold and silver markets, are you prepared?

Back in Q2 of this year, there were screaming bargains in some of the best companies in the resource world.

Subscribers and I were prepared, picking up world-class companies and stocks in price swings that a junior or small-cap company normally sees.

In markets exactly like you see today, it’s important that you know which stocks you’re holding are liquid – and which ones are illiquid.

We are not even halfway through the share-printing spree that resource companies (explorers and developers) went on. These companies are giving central bankers a run for their money (printing).