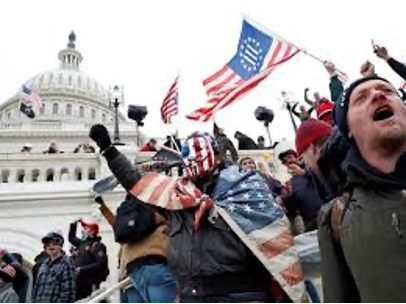 In one instance after another, history proves to be a reliable bellwether as to what will happen in the future. The reason that this is so often true is that, throughout the ages, whilst technology has been ever-changing, human nature remains essentially the same.

In November of 1932, the Nazis had lost considerable ground in Parliament but were still holding on to power, albeit tentatively.

With only one-third of the vote and a federal election scheduled for March of 1933, the Nazis faced losing out to the Left-oriented parties.

Then, on the night of 27th February 1933, flames erupted from the Reichstag.

The people of Germany were horrified that their parliament building had been burned.

A man was immediately arrested who was claimed by the Nazis to be a communist working for the left-wing opposition parties.

The German people called for a return to law and order.

The Nazis acted swiftly, drawing up the “Decree of the Reich President for the Protection of People and State.”

The act abolished freedom of speech, freedom of the press, freedom of assembly and freedom of privacy. It additionally suspended the autonomy of the various German states.

The Nazis were re-elected in the March election and, thereafter, would not need to have any concerns over their future rule. Absolute power was quickly created.

So, fast-forward to Washington, D.C., in 2021 and we have an attack on the Capitol Building.

Within minutes of the attack, videos were all over the TV media. (Did the attackers conveniently send videos immediately to CNN and MSNBC, incriminating themselves? Seems doubtful.)

One report stated that the “hundreds of demonstrators, among them Nazis and white supremacists, who carried out last week’s attempted coup did so under the guise that Trump’s claims of voter fraud and a stolen election were true.”

Within the hour, the media rounded up Democrat leaders, who spoke of “an attempted coup” and “an unspeakable assault” and called for “the immediate impeachment of Donald Trump and his removal from office.”

Further, the same leaders called for the expulsion of Republican lawmakers who “attempted to overturn the election,” stating that they “violated the 14th Amendment.”

The 14th Amendment states that “No person shall be a Senator or Representative in Congress [who has engaged] in insurrection or rebellion” against the United States.

And such action against Mister Trump and his supporters in Congress would be entirely justifiable… if the accusations are indeed factual.

And that’s where we run into a bit of a snag.

The demands for removal from office are based on two premises: first, that Mister Trump incited an attack on the Capitol Building, which he did not. He called for a protest, but that is all. He was within his rights to do so.

Second, that the congressmen who back Mister Trump do so in support of his election fraud case – demanding that it be heard by the courts, which has been denied him.

Whether we think of Mister Trump as the populist saviour or regard him as a demon is unimportant. The action being called for is not justifiable within the Law.

But as long as we’re at it, we might put aside, for a moment, the vitriolic reporting regarding the attack on the Capitol and examine the videos objectively. Was this indeed an attempted coup – highly armed troops who acted with military precision?

Well, no. In fact, the attackers seemed to have been divided into two groups. The first appear to be actual Trump supporters, some wearing silly outfits, wandering aimlessly in the Capitol and taking selfies with Capitol guards. (Not exactly your guerilla strike force.)

The second behaved more like the Antifa groups that were hired to create riots in some forty cities in the US in 2020. This latter group caused minor mayhem in the Capitol, then quickly left, after the videos had been filmed for the benefit of the media.

If we ignore the media rhetoric and study the videos objectively, what we see is, in fact, two entirely different groups entering the Capitol. The first are clearly Trump supporters, who, at worst, acted as vandals, stupidly breaking windows and pinching Mrs. Pelosi’s lectern whilst grinning for photos. Their behaviour resembles a drunken frat party gotten out of hand, more so than an insurrection.

But should Congress choose to press charges against them, they are legally justified in doing so.

The second group clearly had greater focus and caused a disturbance, damage to property and personal injury. These people, if they can be found, should also answer for their actions, regardless of whether they were paid by one side or the other to perform their little amateur drama.

What we witnessed was, in fact, a minor event of vandalism that was exacerbated by the fact that it took place at the Capitol Building. It pales in comparison to the scores of riots in America in 2020, with their burning of vehicles and buildings and even the takeover of public and private real estate.

But this incident was immediately made use of to make demands to remove a president and some elected Republican members of Congress from office.

Immediately after the calls for removal, numerous other Republican congressmen hurried to the cameras to state that they in no way support Mister Trump at this point, then stood back to allow the Democrat lynch mob to do their worst.

And so, we look back again to the events after the Reichstag fire.

People are shocked and scared. There’s a call for law and order.

The Nazis acted swiftly, abolishing freedom of speech, freedom of the press, freedom of assembly and freedom of privacy. The Nazis took full power from that date forward and transformed Germany into a collectivist state.

In the US, the playbook has been altered slightly.

The president and others arguing in his favour were silenced by social media. Congressional sympathizers were threatened with expulsion. The conservative media have come under attack. (Freedom of assembly and privacy were already decimated in 2020.)

The new regime now has full power and the observer must now ask himself what this will mean to his few remaining “inalienable” rights and whether his treasured Liberty will soon be just a memory.