The Lighting of the Fuse 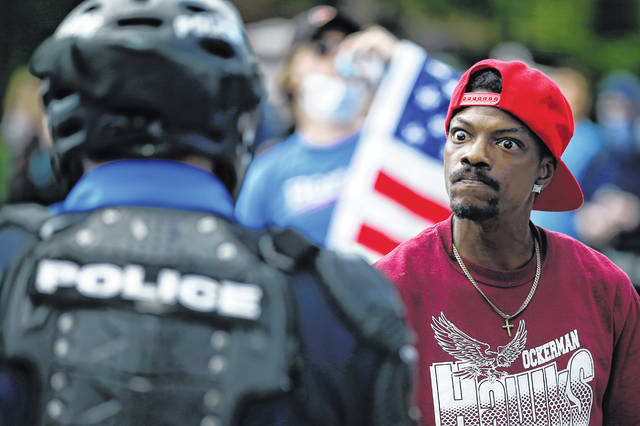 In 1968, the Beatles released “Revolution,” in which John Lennon sang,

“You say you want a revolution… well, you know, you better free your mind instead.”

Certainly, he had it right. As much as the US needs a complete replacement of its political power structure, it’s unlikely that the current population of protesters have thought through how sloganeering and/or the destruction of private property will bring that about.

Rather than jump on board with provocative but irrational rhetoric and be conned into looting and burning, it might be better to “free your mind instead” – rise above the fray.

Ah, but the sixties were less-crazy times, when even pop stars might have been a bit more level-headed.

To be sure, at that time, there were those factions that promoted absurd, unworkable ideas. College students dominated their numbers, holding up placards that said, “Smash the State,” “Black Power,” and “Kill Whitey.”

At the time, those placards, seen nightly on the television news, were disturbing for those who were older and whose lives were invested in the continuation of a more-or-less stable system.

But then, that was the whole point. The protesters were mostly young college students, away from home for the first time, with the opportunity to rebel against their parents and establish their own identity. Seeing themselves on television provided them with that identity, as did being part of a group that their parents would never have approved of.

No surprise, then, that the slogans urged the destruction of the norm, in a startling manner. After all, no self-respecting college student would hold up a placard with a slogan that his parents might possibly endorse. The objective of the slogan is not that it be rational; the objective is that it have shock value. The more upsetting – the more attention-getting – the better.

And so it is today. Along with the placards that possess a sympathetic message to one cause or another, we should not be surprised to see messages such as, “De-fund the Police,” “White Silence Is Violence,” and “No Justice, No Peace.”

Of course, such slogans are extreme and are not backed with a plan that might lead to a better future. But they do their job: to be provocative and attract attention.

So, does this mean that such protests are not a matter of concern?

Well, no. Protests are a very useful early-warning system and should be acknowledged as such. It’s their cousin – riots – that should be eyed with suspicion.

Some riots are caused spontaneously. They tend to occur at random, a result of pent-up frustration and anger. Once that anger has been spent – in a week, or a month, or whatever is necessary – they tend to peter out and disappear, without any resolution.

Either way, the goal is increased power for a particular group – something that should always be suspect.

In recent years, billions of dollars have been spent to dominate the media, particularly television. Twenty-four hour news networks have been created that no longer present straightforward news for the public to consider. Each of these networks deals almost entirely in propaganda. Some vilify the left; others vilify the right. All incite anger.

And over time, they’ve been quite effective. Most people will not willingly watch even five minutes of the opposing news channel, but may well become addicted to the one that supports the view they’ve come to identify with.

And the propaganda fire has now been lit beneath the two factions for a long time. Now, with the manufactured emergency of the coronavirus and the almost theatrical killing of George Floyd, we’re seeing the first major release of the pressure that’s been building, courtesy of endless propaganda by the “news” media.

The craziness that has, until now, been under wraps, has now begun to boil over into riots. But then riots themselves are nothing new. What should be of interest, though, is that the latest spate of riots has been augmented by groups of rioters-for-hire. At the time of this writing, peaceful demonstrations have occurred in all fifty states, but riots have occurred in thirty-nine of those states, in fifty-eight cities. There have been many reports of trained outsiders being bussed in, destroying property and attacking people.

They appear in swarms of a dozen or more, doing as much damage as possible in as short a time as possible, then move on. In some cases, otherwise peaceful protesters join in. In others, protesters are clearly seen to be attempting to discourage the rioters.

So where does this lead? At what point does it become something greater?

It should be borne in mind that it actually takes very little to go over the edge.

In 1789, only 100 rebels were killed storming the Bastille in Paris, but that was enough to set off the powder keg of the French Revolution.

In 1905, only 200 people were killed on Bloody Sunday at the czar’s Winter Palace, but again, that was enough to justify the revolution that followed.

As stated above, the US is overdue for a complete replacement of its power centre, and there will be those who feel that revolution may be the answer.

The trouble is, revolutions have a vexing penchant for replacing one autocracy with another, or as The Who sang in 1971, “Meet the new boss – same as the old boss.”

It’s entirely possible that the present escalation in violence was either created by the powers that be, or will be co-opted by them as a justification for the implementation of a full police state.

In 2001 and 2011, respectively, the Patriot Act and the National Defense Authorization Act were passed. Taken together, they effectively supersede the US Constitution in its entirety if a National Emergency condition is declared by the president.

Once such a declaration has been made, the US will officially be under military law, and the US as a whole will be legally defined as a battleground.

If and when this occurs, “The Law,” as it is presently known, will cease to exist. It will be replaced by a condition in which anyone in authority has the power to act arbitrarily in any situation, if he determines, unilaterally, that the actions of a citizen were suspect.

If and when a major change occurs in the US, it would be hoped that the change would be one in which liberty is restored.

However, history suggests to us that this rarely occurs. In most cases, one form of tyranny is replaced with another form of tyranny, often a more all-encompassing one.

Those who welcome the lighting of the fuse should carefully consider whether they themselves may become collateral damage.

Editor’s Note: The effects of these unprecedented events could soon have significant economic, political, and social implications.

Unfortunately there’s little any individual can practically do to change the trajectory of these trends in motion. The best you can and should do is to stay informed so that you can protect yourself in the best way possible.

That is precisely why NY Times best selling author, Doug Casey just released this urgent new video titled The Most Dangerous Event of the 21st Century. In it, Doug reveals what you need to do to be ready.