“The Fight Started When He Hit Me Back” 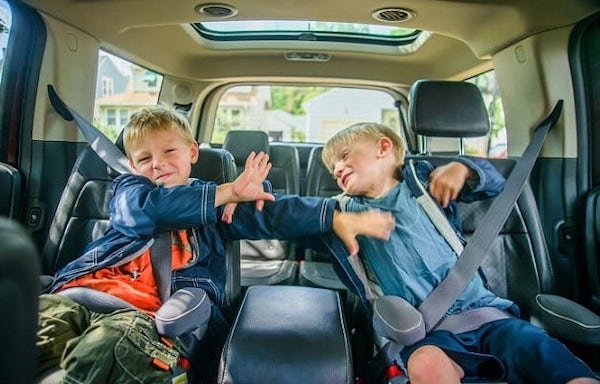 There’s an old joke about an adult asking two boys how a fight started between them and one boy responded as stated above.

When two children are involved, we might choose to lecture them both and possibly punish the one who instigated the fight. But when nations are guilty of the same behaviour, we tend to simply accept the rather absurd explanation as being reasonable.

Back in the 1950s, the US sought to establish a presence in Vietnam. First, “military advisors” were sent in, then armaments. But soon, US troops were added. When the US public objected to their country instigating a war halfway around the world, where it had no business being, President Johnson made the announcement that the destroyer USS Maddox had just been attacked in the Gulf of Tonkin.

President Johnson used this incident to convince the American people that North Vietnam had attacked a US ship and they needed to be taught a lesson. It was at that point that the US began the Vietnam War in earnest. It ended in defeat for the US, but not before over 1.3 million deaths were totted up.

In 2001, the US was spoiling for war with Iraq. Although US public opinion favoured a diplomatic approach, President George Bush stated emphatically that Iraq had had a hand in the 2001 attack on the US and that Iraq possessed “weapons of mass destruction” that may have been intended for use against the US.

The US then invaded Iraq, made possible the assassination of its leader and devastated the country. It was only later that the American people learned that there were no weapons of mass destruction and never had been.

In 2015, Saudi Arabia bombed Yemen, aided by US armaments, logistical support and military personnel. Yemen fought back, aided by Iran. The US immediately cried, “Foul!” and vowed retaliation against the Yemeni-Iranian aggressors.

The attacks on Yemen have been described as a “humanitarian catastrophe” and even “genocide.” Some thirteen million Yemenis face starvation in what the United Nations has described as the “worst famine in one hundred years.”

As a result of the bad press it’s received, the US has since backed off from its active invasion of Yemen but still supports the Saudi invasion through weapons sales.

And of course, these are just a few examples. History is filled with such scenarios.

Possibly the first US use of the explanation, “The fight started when he hit me back,” came when Teddy Roosevelt sought to create the Spanish American War in order to gain control of Cuba and the Philippines. And whilst the US has since used this approach repeatedly since it began its quest for empire in 1889, it certainly did not invent this insupportable excuse for the invasion of other nations. It’s been used for millennia by leaders seeking to convince their peoples to go to war.

The US does, however, take the award for creating the most proxy wars in other nations. They have been unusually adept at creating wars in other people’s backyards, leaving American soil almost invariably untouched.

Around the world, governments that don’t cooperate with the US have been toppled, cities destroyed and populations decimated.

Alarmingly, this trend has become rampant in recent decades. Never has the US invaded so many countries, in so many parts of the world at the same time.

But why should this be? Who benefits?

Well, certainly not the people of the US. Wars are the costliest activity that governments have ever invented. But governments tend to be lavish in supporting wars, once they’ve begun. And of course, warfare is supported by a single-payer system: the taxpayer. The more wars, the more tax must be extracted from the populace.

So, again, who does benefit?

Well, the one entity that invariably benefits from warfare is the military-industrial complex – the group of companies that supply planes, tanks, rifles and even the socks that the soldiers wear. All for inflated prices that would never be tolerated if the same goods were sold in stores.

The tab from the military-industrial complex rises each year. This has been made possible through the creation of perpetual warfare. The more countries the US is at war with at any given time, the greater the sales to the US government by the complex.

Of course, in order for this to occur, political leaders must continue to start wars with regularity and keep them going as long as possible, even to the point of pointlessness, as in the eighteen-year old War in Afghanistan, in which the US has not yet achieved a victory of any kind against the poorly armed, untrained, unorganized Afghani sheepherders.

But it has cost the taxpayer $975 billion so far.

And it wouldn’t be surprising if the military-industrial complex were to show its gratitude to political leaders with monetary rewards. Indeed, it would help to explain why congressmen who receive an annual salary of only $174,000 never seem to leave office without having become millionaires during their tenure.

Of course, the average American can have no effect on the way in which his country is run. Certainly, whilst each party promises to change the system and end corruption, there is never any change for the better, regardless of which party is in power at any given time.

However, an understanding of how the system really functions increases the citizen’s awareness of his own role in it. His government regards him as a milk cow, one that’s regularly required to provide more milk to support the ever-increasing demand within the “system.”

And the next time a political leader pontificates that a foreign country poses a threat to the US and the US needs to “hit back,” he may wish to question the validity of the claim.

The truth is, we’re on the cusp of a global economic crisis that could eclipse anything we’ve seen before. And most people won’t be prepared for what’s coming. That’s exactly why bestselling author Doug Casey and his team just released a free report with all the details. Click here to download the PDF now.