The Easiest Countries to Move to From the USA

2020 was a record year at Nomad Capitalist in terms of US citizens calling us to help them create not only a backup plan for citizenship and banking worldwide to protect themselves in the event that things got worse but also requesting our help to get them out of the US before things went completely downhill.

Almost all of them had the same question:

What are the best and easiest countries to move to?

While there is no one perfect place, I’m going to share with you what I believe are four pretty easy places for most Americans to move to.

I’ve set up three criteria that I want to use. First, the countries have to be relatively easy to immigrate to from a legal standpoint. As much as people from the US talk about moving to Canada if their guy doesn’t win the election, it’s not that easy to move to Canada. Canada doesn’t just take anyone that wants to come in with $7. For my criteria, the country had to be relatively easy for a lot of people to move to.

Next, I looked at places that had a relatively similar cultural connection or some kind of cultural affinity to the US. I’ve been doing this for many years so if you told me to go and spend time in Cambodia, I’m perfectly comfortable doing that. But I understand that a lot of Americans may have only traveled to the more touristy destinations.

The people that have been calling us this year seem to be looking for something that feels somewhat like the United States – not a total cultural shock.

Lastly, I wanted these places to be affordable.

These four countries I’ve chosen could be a fit for many US citizens. It does not mean that if you are from the United States that they are the best places for you. I know that many of you have been very adventurous in your travels and you might want to move further afield.

But for this article, here are four places that stand out for at least getting started. 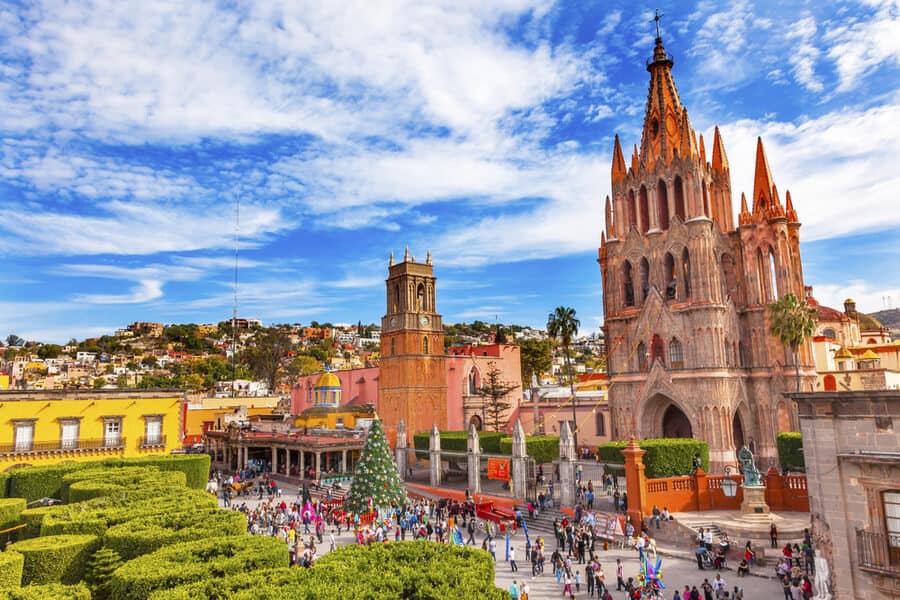 San Miguel de Allende has one of the largest US expat populations in the world – just one reason Mexico is one of the easiest countries to move to as an American.

Even before Donald Trump got elected, I was asking why it is that people on the left threaten to move to Canada when they could move to Mexico instead. It’s easier to immigrate to, cheaper to live in, has better weather, and has better food.

There are so many great things about Mexico and yet many people look down on Mexico. I would like to change some of that view.

There are also plenty of beautiful parts of the country.

If you prove that you have a pretty basic amount of income, you can get residence in Mexico and spend time there. If you’re willing to actually live there, then eventually you can get Mexican citizenship as well.

They have a unique form of taxation that’s relatively flexible for people just getting settled in the country for the first year or two.

It’s also next door to the US – close to home. As someone who no longer spends any time in the United States, I go to Mexico to feel some of the US comforts. If you want a hot dog or some of those Americanized foods or experiences, Mexico can provide those. I love Mexican culture and food, but they also offer some of those more Americanized things too.

You can learn more about getting residency or even citizenship in Mexico, here. Panama’s historical ties to the US make it one of the easiest countries to move to if you are an American.

Another country in Latin American that’s pretty easy for most Westerners to get into, including US citizens, is Panama. They have the Friendly Nations Visa program which grants nationals from a list of 50 countries a visa if they create economic or professional ties in Panama.

Establishing economic ties can be as simple as putting $5,000 in a bank in Panama – plus a couple of extra grand per dependent if you have a spouse or children.

It could also be as simple as setting up a corporation. There are some reporting requirements with the US government for that corporation, but you don’t really need to do much with it. You don’t need to employ people or meet the requirements that a lot of other countries make you do in terms of running a business.

You could also buy a home, make some kind of investment in forestry, or make any kind of economic connection in addition to your bank account and that gets you into Panama. You don’t have to stay in Panama to keep the residence active, but you can choose to live there.

The country uses the US dollar so you won’t have currency shock or fluctuation – this is particularly important as many experts expect the US dollar to decline in 2021.

While it’s not the most affordable place, there are a lot of the comforts that Americans like, particularly in Panama City. There are parts of Panama where English is somewhat widely spoken. Some of the beach communities are really nice. There are also nonstop flights back to the US.

It’s certainly more Americanized because of its history than some of the other countries in Central America. And it’s definitely not a bad choice for many Americans to go with. 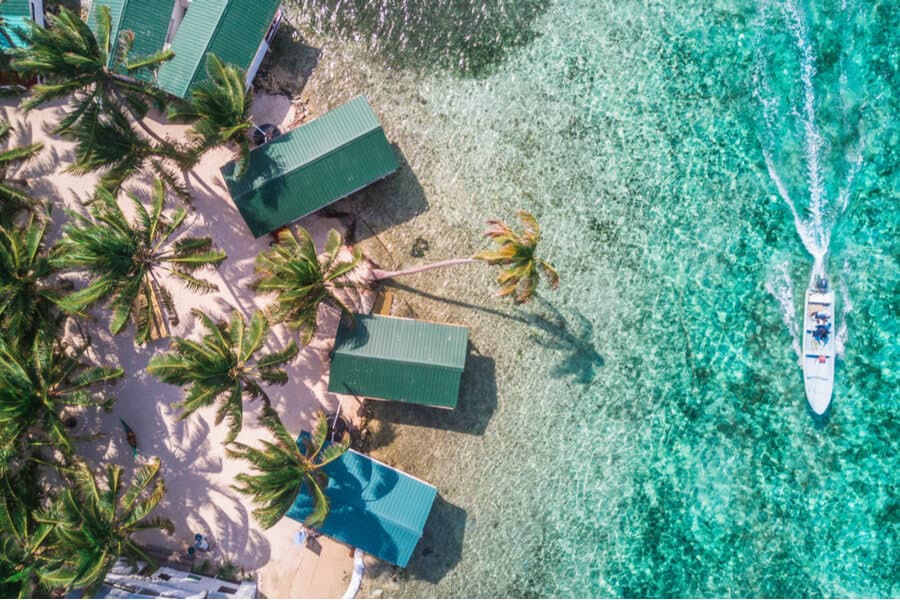 If your definition of the easiest countries to move to from the USA includes an English-speaking population, consider Belize!

Even though there are some parts of Mexico and Panama where you can get by with only English, it’s advisable to learn at least enough Spanish to function in local communities. However, if you’re looking for an English-speaking country, particularly if you’re a retiree, look to Belize.

Some of the benefits of Belize are that you are next to Mexico, there are nonstop flights at normal times from various cities in the US down to Belize and you have a lot of really nice diving and beach areas. In addition, setting up offshore bank accounts in Belize is fairly easy.

You’re probably not going to want to live in one of the cities, but would more likely be living out on one of the keys or somewhere along the water.

Particularly if you are retired, their residence is relatively easy. You bring about $24,000 a year into the banks there, show that you have some money, and you can move all your household goods into the country, duty-free.

They have a couple of programs, but I would generally say for folks 45 and up, Belize is an option worth considering because they do speak English as their native language.

Obviously, it’s a much smaller country than even Panama and certainly Mexico. They have a lot of options for someone looking for a bit more laid-back lifestyle. It’s not a bad place to live if you’re just looking to escape and have a totally different life experience. A lot of Americans have chosen to go down there. 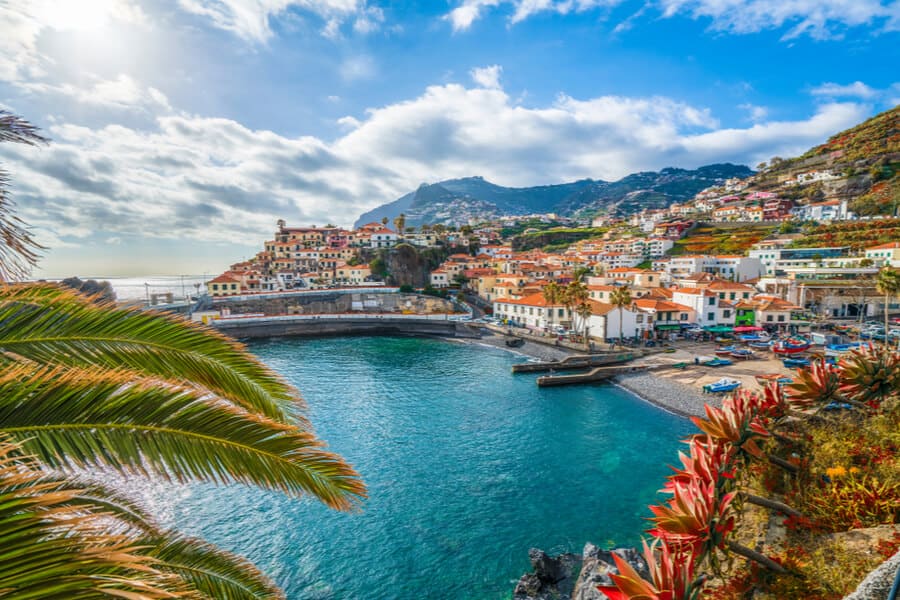 Portugal is quickly becoming one of the easiest countries to move to in Europe for investors from the US and most any other country in the world.

Another place that we’ve seen a lot of US citizens looking at is Portugal. It has a Golden Visa program as well as other residence programs for those who are looking to invest in an apartment to live in and spend time there.

You’ve got your choice: If you want to invest less money and actually live in Portugal, you can maintain all the trappings of a home, or if you’re willing to invest more, you can have the flexibility of choosing to live there or not.

Portugal is becoming a very popular nomad and expat destination – not only with younger people and digital nomads but also for retirees. We have a lot of folks who are asking me about Portugal.

I’ve been going there for a dozen years. It has always been a beautiful place, but now it’s becoming more international and offers more of the things that Americans are used to. English is more widely spoken – though Portuguese is not that difficult to learn if you spend time there.

It’s definitely a place to look into because it is a part of Europe. It’s more affordable than many other European countries and a lot of Americans could easily fit in there. Plus, being so far west in Europe, it’s not so difficult to get back and forth between the US.

Bonus Easiest Countries to Move To

These are four countries that I think are relatively culturally available, affordable enough to live in, and offer immigration options available to US citizens. These are at least four places to start. You could also look at Asia or Eastern Europe, or further south in South America.

I’ve talked about countries from Malaysia to Colombia to Georgia. Those could all work. We have also talked about countries like Switzerland, Jersey, and the Cayman Islands. We have high-level clients who want to live in those places. I’m sure most Americans could handle living in the Cayman Islands… it just happens that the investment option is a bit more intense and a bit more expensive.

If you want countries that offer easier and more affordable immigration options, you can check out this YouTube video.

But if it’s an island you’re looking for, check out our Nomad Beach Index or our article on the best island countries with no income tax.

And if you have your heart set on living in a country where you can get by just speaking English, the easiest countries to move to for you may be on our list of these 15 expat-friendly English-speaking countries.

Just know that there is no one perfect place for anybody. There are lots of places where you can go. These are just a few options to help you get started.