The Dawn of Gold

Many believe July 2020 was one for the gold history books, but it wasn’t even a top 10 move in gains for gold historically.

Let that sink in.

A new all-time high was hit, and yet the “big” monthly move that’s drawn a generation of new investors and captured the imagination of a whole new set of investors … isn’t even a top 20 monthly gain percentage-wise for gold historically.

In short, we are far from the top in gold. 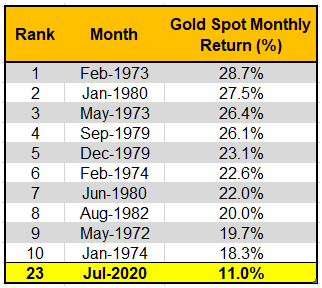 It’s true that gold and silver stocks have responded, catching a tailwind not seen in a decade.

But institutional money hasn’t even entered the sector in a big way.

In my premium research, we published a detailed analysis of the flow of funds from institutions and shared our unique conclusions based on the proprietary data.

A Path to Profit – The Fed Can’t Print Gold

In the 12 years since the Great Financial Crisis (GFC), the U.S. Fed, European Central Bank, Bank of England and Bank of Japan have invented new ways of printing money and keeping the financial markets afloat.

Below is a chart showing how much the total assets (balance sheets) of central banks have ballooned during the crisis. 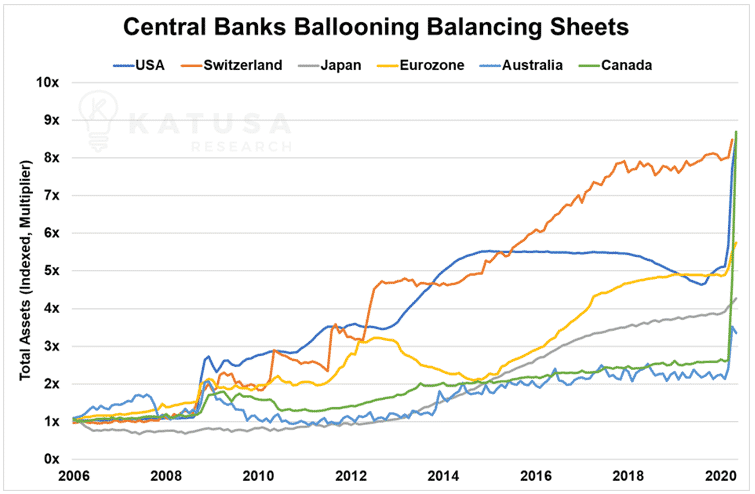 Now, there are two primary schools of thought on this:

Regardless of which scenario plays out, gold will benefit because that is its primary draw as an investment—a hedge against fluctuations in the real value of money.

The pandemic and lockdown produced record inflows into:

The so-called “pet rock” and “barbarous relic” is now on the lips of every talking head.

Flip on the financial news today, and every trader and portfolio manager seems to be extolling the virtues of gold and silver.

You will hear guys like Jim Cramer talk about how gold miners like Barrick, Newmont, and Agnico Eagle are better buys right now.

Looking at the YTD returns below. It’s hard to argue that gold and silver aren’t the clear winners in this bull market rally. 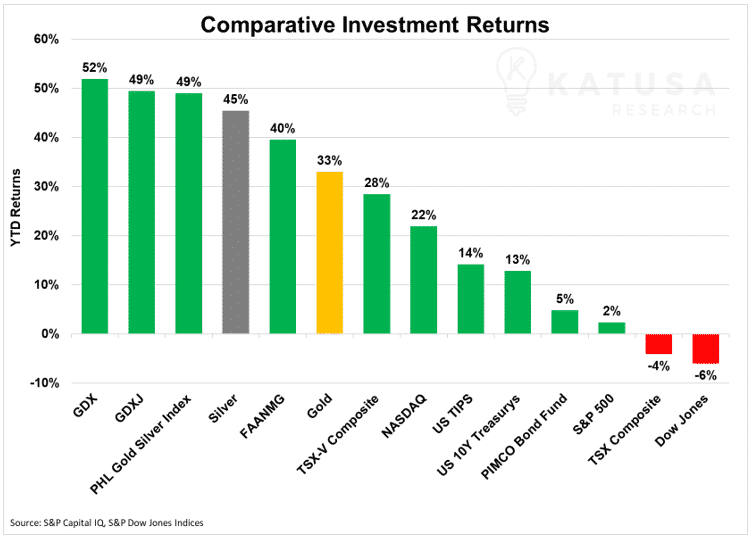 Economists like Nouriel Roubini and Mohamed El-Arian are talking more about gold and the benefits of the safe-haven metal in these uncertain times.

Even Goldman Sachs is changing their tune. They once mocked gold as an investment that’s nearly always beaten by the market.

They’ve since joined the chorus of major financial institutions like Bank of America and Citigroup ringing the alarm on currency debasement.

In the next chart, you can look at how gold prices have surged, with a Relative Strength Index (RSI) showing how prices are reaching an overbought level not seen since mid-2011. 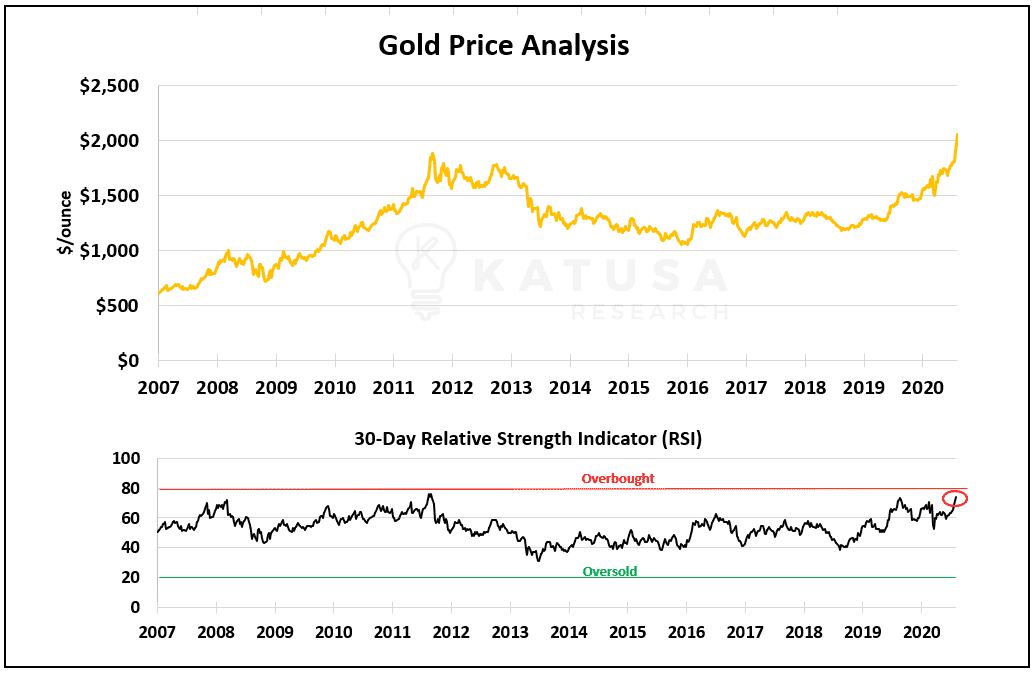 But that is one indicator.

Things have changed so much over the last decade, and we are just starting to see the impacts of Modern Monetary Theory (MMT) on the price of gold.

Is There Enough Gold to Meet Demand?

This year, as many as 119 gold-producing mines in 18 different countries have been offline at some point or operating at reduced capacity due to COVID-19.

Estimates vary as to how much 2020 production was lost as a result of the pandemic. The last COVID-19 impact report published by S&P Global Intelligence estimated a 10% decline in their forecasted gold output for 2020 (approximately 11 million ounces).

The 10% estimate was also affirmed by the World Gold Council, despite sourcing their data elsewhere.

So, let’s go with the 10% figure. I have respect for both outfits that have come to the same conclusion.

Previously, 2020 gold mining output was projected to increase by 3.7% YoY. Instead, it’s fallen by at least 6.7%, barring any unforeseen shutdowns.

The most important statistic from the data was an estimated loss of US $2.5 billion in revenue from forecasted gold production. For lost silver production, this amount was US $502 million. 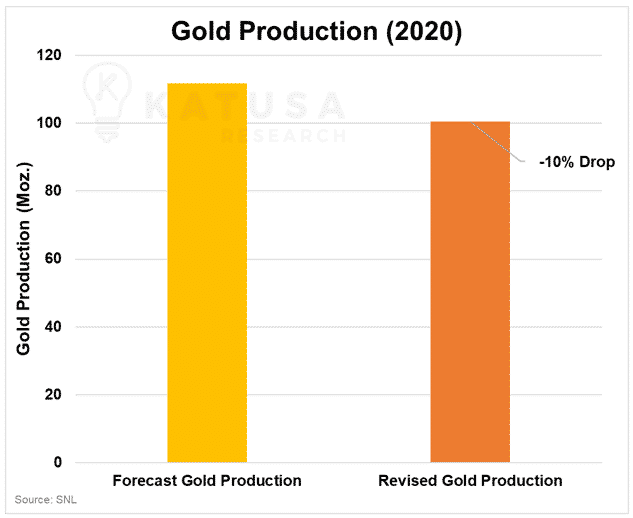 Gold projects that weren’t economical at $1,750 per ounce, suddenly look like no-brainer investments.

Land packages that were once barren moose pasture are now labeled as “greenfield” mining projects.

For new investors and speculators in the gold space, don’t forget “buyer beware.”

Not all gold projects are equal.

There have always been three types of management teams in the precious metals sector: the innovators, imitators and hot dog vendors.

The latter two aren’t around during a bear market but pop up during a bull market like a plague.

Make sure you know which management team you are backing. Everything starts with great people.

In the late 1990s, there were thousands of dot-com companies. In 2007, there were literally over 500 uranium companies on the stock exchange—15 years prior, there were only 15.

In 2017, the cryptocurrency market exploded, with over 850 coins and new celebrity initial coin offerings announced daily.

There will be an explosion of new precious metals companies and financings looking for your money.

Or worse, looking to leave you with nothing better than an old hot dog.

Is It Too Late to Invest in Gold Stocks?

As gold pushes higher, the economics of many projects will change.

And there are many factors to consider when reevaluating a company. That includes all-in mining costs, exploration costs, administrative costs, royalties, taxes, currencies and more.

Do you know which companies in your portfolio operate in safe jurisdictions and away from nationalization and confiscation risks?

Is your valuation properly discounted for these potential cost inflations and government risks?

As much as you fawn over a climbing gold price, don’t think that foreign governments aren’t doing the same. They have services and stimulus to pay for those votes and to keep the masses happy. We are in the “Era of Woke,” where feelings matter more than reality and logic.

You don’t have to spend over $500k a year on data feeds and analysts to figure out which gold companies to invest in.

Consider becoming a subscriber to Katusa’s Resource Opportunities and let us do the hard work for you.

So how has Katusa Research done?

Not only have we beaten every index and sector, but our portfolio also consisted of liquid companies (not microcaps) that were considerably lower-risk than the indexes that we all beat. 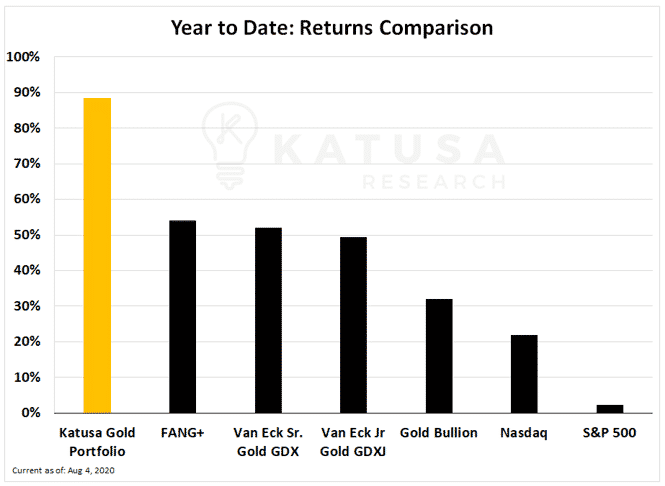 Be wary of what you are buying and, specifically, your allocation to the different companies.

You can follow along to see exactly what I’m doing with my own portfolio. In fact, I’ve just released the details on my next major gold investment.

It’s a brand-new company, with a major upside. Even better, it’ll be open to all investors, not just the rich ones. This is going to be a very fun ride.