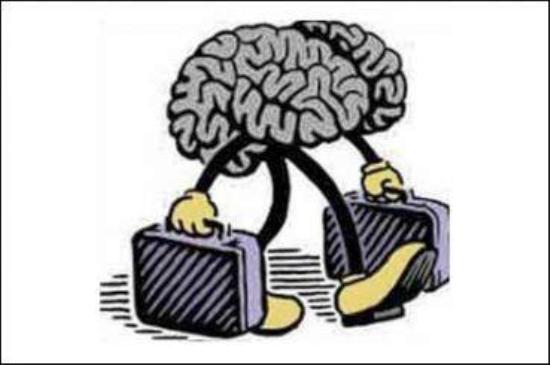 In 1933, Albert Einstein renounced his German citizenship soon after Adolf Hitler became Chancellor. Although that left him without a legal home, he was welcomed in England and later, the US, and eventually became a US citizen in 1935.

This was quite a risky move at the time, as he had no certainty of a better life outside of Germany, or even a prospective job. But he saw the writing on the wall. As a man of reason, he focused not on the present condition in Germany, but where events would ultimately lead. His focus was on the Germany of the future and he made a difficult call that those with less vision might not have made.

In 1940, Ludwig von Mises was perhaps the most gifted economist in Austria, as well as being a visionary of libertarian thinking. But he left Austria in that year. The Nazi expansion was already under way and he understood that, if anything, he was leaving late in the game, but before it became impossible to leave. On that day, Austria lost one of its best minds.

When Fidel Castro came suddenly to power on 1st January 1959, many business leaders understood immediately what effect that would have on them in the future and made a hasty exit from Cuba. Then, in the following years, as the socialist confiscations of businesses and property began to take place, larger numbers of businessmen made their exit. In the end, hundreds of thousands left.

Many similar examples can be studied, evidencing that, when a systemic collapse is imminent and, even more so, after it has begun, it’s invariably the best and brightest that choose to head for the exit doors first.

In most cases, it begins with a few forward-thinking people making their exit, followed by a small wave of others who see what’s coming. That wave is followed by a larger wave, made up of those who need a bit more evidence of decline before they see the writing on the wall. After that, the waves become ever-larger, as the most inventive and productive people realise that they may become collateral damage of the decline.

But why should this be? Is it coincidence that the greatest contributors to a society leave prior to a major decline, or does it simply seem that way after the fact – after they’ve been proven to be correct?

Well, if we observe any society, we learn that the bottom 10% tend to contribute very little. Indeed, they tend to be a drag on the economy and to remain so throughout their lives.

Then there’s the main bulk of society – say, 60% – who merely accept whatever the leaders dictate. They may complain that they want more, but for the most part, as long as they don’t experience extreme hardships, they accept their lot in life and tend not to be especially analytical. Therefore, when a systemic decline is in the works, they tend not to notice, as they’re not in the habit of analysing change.

Then there are the people at the management level – say, 20% – who are more expansive in their thinking. They tend to be the class of people who, whatever their field of expertise, make day-to-day analysis and day-to-day decisions.

At the top, there are those who consistently think outside the box – the Einsteins, the Mises, etc., who are gifted and are capable of perceiving the larger picture. They’re also the visionaries, who are capable of imagining and planning a greater future.

Not surprisingly, it’s this group that recognise the coming danger first, since they habitually analyse events. The decline is simply the next series of events.

It’s important to note that those who recognised the coming problem first had the greatest amount of time to prepare. Thus, they were not only more able to take their wealth, however large or small, with them, they also arrived at their destination of choice at a time when few others were doing so. This made it more likely that the “welcome mat” was out and they were well-received.

For each successive wave of exiters, the ability to leave freely became less likely, as did the possibility of being welcomed in the destination of choice.

Today, we’re witnessing the unravelling of the “First World” – the group of nations that were launched into prosperity following World War II. All of them – Canada, the UK, Australia, Japan and much of Europe – hopped on the US train to prosperity after the war and benefitted from the post-war prosperity that the US created. But unfortunately, they were still on the train when the US changed from being the world’s greatest creditor nation into the world’s greatest debtor nation. And now, still on the train, they will follow the US over the economic cliff that it’s headed for.

And so, as always transpires, a brain drain will occur. I first began warning of this, some twenty years ago, well in advance. The actual exodus did not begin until 2008, and even then, it was just a trickle. Now, it’s speeding up.

Of course, for anyone who lives in an exit jurisdiction, such as the EU or US, this is hardly noticeable. Indeed, most people in these jurisdictions are preoccupied with the flood of immigrants – the largely unproductive refugees in their tens of thousands, who are flooding in, based upon promised largesse from the government.

Not surprising then, that few people notice those who are leaving.

This group is, however, quite visible to those of us who live in a destination country.

In my own country, larger numbers are applying for residency every year. And true to form, they tend to be those who are capable people, having been successful in their home countries and seeking a continuation of opportunity in their choice of destination.

For the most part, they invest whatever wealth they’ve earned in their lives in the target country, thus ensuring continuing prosperity for that country.

We’re now past the initial stage of the exodus – the trickle of the most-informed individuals – and are witnessing the first real wave of people making an exit.

As the waves increase in volume, we can expect the governments of the exit countries to react. First, they’ll create capital controls, making it difficult to expatriate your wealth.

Indeed, this has already begun for Americans – an “exit tax” that is to be paid on any wealth you presently have, even though you’ve already paid a stiff income tax on it.

Next come the migration controls – the laws and regulations that seek to criminalise any sort of expatriation. We can expect that these will be explained by governments, not as a loss of freedom, but as a protection against those who expatriate, with the accusation that they’re involved in money laundering and/or terrorism.

But there’s a final point to be made here that’s rarely considered. Whenever a country experiences a systemic collapse, it rarely, if ever, recovers quickly. Generally, it takes a generation or more.

Why should this be?

Well, once all the best and brightest – the movers and shakers – have exited, they rarely return. They tend to get on with life in their new homes, where they then invest, and cause those nations to advance economically.

Once that’s happened, the exit country can’t quickly replace them. The large percentage who did not see the collapse coming are not equipped to take over in an inspired way.

And certainly, the refugees who entered that country as parasites, following promises of governmental largesse, will not pick up the slack.

Therefore, once a brain drain has occurred, that country is likely to slide into the doldrums – perhaps for a generation, and, as history has shown, often for much longer.

That is precisely why NY Times best selling author, Doug Casey just released this urgent new video which outlines what comes next and what you need to do to be ready. Click here to watch it now.