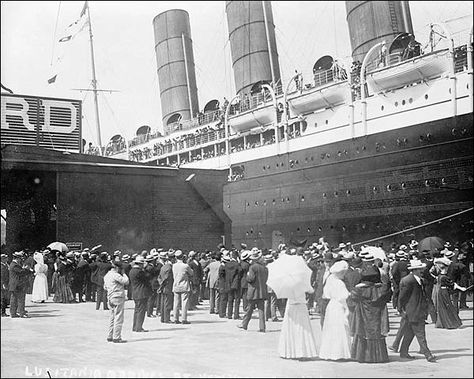 In the early twentieth century, there was an exodus out of Europe.

George, my paternal grandfather, looked around England, where the family had been since the eleventh century, and decided that a national fdecline had begun.

Although England was still very much an empire, it had fallen into the decline that ancient Rome had experienced before it. Where it had once expanded its possessions and profited from them, it was now spending millions of pounds maintaining them. The less profitable colonies were becoming a liability and the more profitable ones were breaking away.

In addition, the British class structure was beginning to break down. The ruling class were becoming lazy and unproductive and, increasingly, were bleeding the lower classes in order to continually expand their own idle privilege.

Worse, Britain had fallen into a seemingly never-ending series of wars. Wars have always impoverished countries, creating the necessity of increased taxation. And in the early twentieth century, all of Europe was spoiling for a war that was to become the “Great War.”

Historically, these conditions always have led to decline in a nation or empire, leaving the new generation of adults with a worse future than their antecedents had had.

And so, after careful consideration, George came to the conclusion that, as a young, educated gentleman of twenty-four, he would take his new wife off to the “New World.”

His purpose was to leave the decaying empire to pursue greater opportunity elsewhere.

Meanwhile, my maternal grandfather, Michael, had also joined the Big Skedaddle. His family were from the UK, although he was then living in Russia.

But Russia was also displaying the telltale signs of the fall of Rome.

Under the czar (the Russian translation of the Roman title “caesar”), the ruling class were becoming lazy and unproductive and, increasingly, were bleeding the lower classes in order to continually expand their own idle privilege.

Worse, Russia had pursued wars with the Turks, the Chinese and the Japanese. It had all become too much for the average Russian peasant to tolerate, and in 1917, revolution had broken out.

Although the majority of Russians had great hope for positive change after the revolution, it soon became obvious that the new communist government was far more repressive than the czar had been. Along with the pre-existing poverty came an unprecedented loss of basic freedoms.

And so, after careful consideration, Michael came to the conclusion that he should take himself off to the “New World.”

His purpose was to leave the decaying empire to pursue greater freedom elsewhere.

Both of the men above were part of a major exodus from Europe – the Big Skedaddle – people travelling on steam ships, understanding that they were unlikely ever to return. One sought opportunity; the other sought freedom. Each found what he was seeking in the “New World.”

And at this point in the two tales, we perceive a happy ending. They each found a home in a former British colony where there was greater opportunity and freedom.

But, in fact, it’s not an ending at all. In all such tales, life is ongoing. Further generations are born, and in time, the same countries that had been so attractive eventually deteriorate, and always for the very same reasons.

The rise of empires is inevitable. Always, there will be one country whose people are more productive than another’s and that country will prosper and expand. But at some point, its leaders may see the opportunity to turn it into an empire, to expand not only the prosperity, but their own power.

And inevitably, continued conquest and its costs, coupled with increased taxation and oppression of the home population, followed eventually by unpayable debt, send each empire into decline.

Case in point: In the early twentieth century, the US was the prime destination for those exiting the declining empires of Europe. It was rich in resources, was undeveloped, had minimal governmental regulation and, importantly, had virtually no welfare state. All citizens understood that their prosperity was directly linked to their own work ethic.

It began as a nation of productive people. And in 1900, it was at a peak of prosperity that attracted millions to its shores and had just begun its gambit into empire.

One hundred years later, however, the empire phase of the US has played out as empires always have historically.

The US is invading overseas countries at a cost that’s beyond its ability to pay for the maintenance of those conquered territories. Like Rome of old, the continued conquest has created an unpayable level of debt that even dramatically increasing taxation cannot cover.

And like Rome, ever-increasing entitlements are being offered in order to appease the increasingly taxed populace.

Of course, as in all empires, the decline takes time to unfold. Although an exodus has begun, those exiting have, for the most part, done so quietly. And this fact has been further obscured by the attention given to the flood of immigrants into the US.

But the present flood of US immigrants are parasitical, seeking government handouts, whilst those exiting the US are primarily those who have been productive and now have something to lose by remaining.

The next wave out of the US – those who create the real exodus – will be the Georges and Michaels, those who have created wealth and seek the freedom to retain it.

This present, smaller wave is the more important one, as they’re quietly leaving, taking their wealth with them. To American eyes, they’re invisible, but to those of us outside the US, they’re becoming more visible every day, as we see their arrivals increasing in number.

The outside world welcomes them, as they’re investing in the recipient countries, creating opportunity.

The Big Skedaddle from the US Empire is therefore only in its initial stage. The very visible stage, similar to the image above, is yet to come, but very much on the horizon.