The Best Tax-Free Countries In The Americas

Have you ever dreamed of living on a sunny island in the tropics away from all the hustle and bustle where you can relax and enjoy life?

If you’re a Nomad Capitalist, you may have dreamed of this as well as finding a place where you could pay very little tax.

Often, when we talk to clients about offshore plans and tax-free countries, the first thing that they imagine is a man in a business suit by a beach somewhere near the Caribbean.

This image exists for a reason: many of the states with no income tax are, in fact, located there.

But there are many more options for zero tax countries in the Americas than what this image implies.

In this article, we will look at all the countries in the Americas where you can live tax-free, whether that is with a residence permit or citizenship, and whether the country offers zero-tax policies, tax exemptions, or a system of territorial taxation.

More Tax-Free Countries In The Americas

While many of our clients are naturally drawn to Europe, the Americas offer a lot of things that Europe does not. For starters, it’s far easier to immigrate there.

The Americas are the “New World” and some countries are only really a few hundred years old; hence, immigration has been the primary means by which they have historically built their population.

Immigration and naturalization as a citizen of those countries are baked into the culture.

Secondly, there is a higher amount of tax-free territories in the Americas than anywhere else in the world. Chances are that the best low-tax countries for your specific needs are likely to be here, just by sheer probability.

Having said this, the Americas aren’t a monolith. Despite often having a common origin point, they have different cultures and ways of doing things. So, it’s impossible to make blanket assertions about how they manage taxes.

We can, however, examine tax doctrines that many of the best low-tax countries share and what the benefits for you would be in pursuing them as an option.

More often than not, these options aren’t straightforward and some planning is required. For instance, there may be a business tax but no personal tax. Or some income is taxable depending on where it originated, etc.

But overall, there are many countries in the Americas that offer tax-friendly policies that allow greater freedom and prosperity for those willing to create a holistic offshore plan.

If you’re just looking for a place where there is little need for much planning, where life is good and everything is to your liking, then look no further than the Cayman Islands – the Monaco of the Americas.

As a  British Overseas Territory, it offers high-quality legal services, health care, and education. It’s like living in Europe but without the hassle of the overwhelming bureaucracy.

But be warned, the requirements are rather high. We’ve written before about how to get a Cayman Islands residence permit, but the short version is that it’s easy but rather expensive.

Unless you’re in a position to spend over $1 million – even for just a temporary permit – you’re likely better off looking elsewhere.

If, however, you are in the select group who can afford such an expense, then you’ll either have to buy real estate or start a company and meet the various capital requirements.

It’s a great option if you have the money.

But what if you’re not in a position to spend over a million dollars for a temporary residence permit, even if the idea of tax-free island living appeals to you? Is there a more affordable, though still exclusive option?

Yes, yes there is.

Bermuda and the Bahamas both offer similar benefits to the Cayman Islands, such as access to first-rate infrastructure and no language barriers. Oh, and no income or corporate taxes.

I’ve recommended Bermuda before for banking offshore as it has many of the classic benefits of offshore banking jurisdictions without the bad reputation or shady actors. It is also becoming an increasingly important player for cryptocurrency.

The Bahamas, on the other hand, is cheaper than Bermuda but that does bring up other issues. Given that it’s a bit poorer, the capital of Nassau does suffer from some crime, though this can be avoided if you stay in the expat areas.

Perhaps it’s lacking the Cayman Islands glitz, but you can spend as little as a quarter of a million dollars and qualify for a residence there. 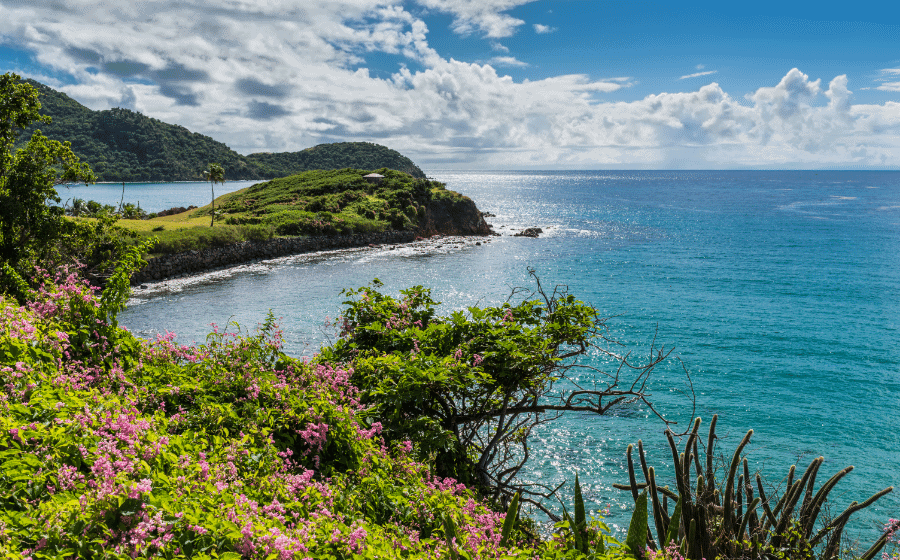 Island nations like Antigua and Barbuda offer both citizenship by investment and zero tax rates.

If you are the type of person who wants to achieve their goals in as fast a period of time as possible, then there is good news for you.

The Caribbean has been famous for being among the few places where a one-time donation can make you a citizen for life.

For a donation of as little as $100,000, you can get a second passport in countries like Dominica, St. Lucia, and Antigua and Barbuda. And if you want the benefits available in Grenada or St. Kitts & Nevis, you can expect to pay roughly $150,000.

However, only St. Kitts and Nevis and Antigua and Barbuda offer 100% tax-free living. And even then, some tax planning is recommended to ensure both your personal and your business taxes are optimized.

But if you’re looking for a tropical location that you can permanently call home and be free of income tax, both of these island nations offer zero-percent rates on personal income.

That said, it is uncertain how long these countries will maintain their zero-tax rates – not because they will put an end to them on their own – but because there are outside players with a vested interest in stamping out zero tax policies.

We’ve seen it before as other small states have been bullied by larger ones to implement some semblance of a tax, or get pressured to stop selling citizenship. I like to call this type of geopolitical bullying the “Andorra Effect”.

In the past, Andorra served a similar ecosystem niche as the Caribbean countries do now, where the rich and famous would go and live to enjoy no taxes. But eventually, the EU had enough of this and threatened the country into having some semblance of taxes.

In this case, the US is the geopolitical bully. Either the citizenship buying programs might end entirely (in which case you should jump in now before it’s too late), or the countries will have some tax rate comparable to what we saw in Andorra, thereabouts of 5%-10%.

Regardless, if you want to have a good card up your sleeve, it might make sense to lock in your tax savings in these countries now while you still have a chance.

Territorial Tax Countries In The Americas

For the average person, taxes are a binary – you either live in a tax haven or you don’t.

But things are far more complex than this. And it is of no use to ignore the wide spectrum of options available to you when you are designing your offshore strategy.

Territorial tax countries tend not to be the strongest geopolitical players. They are often one of many similar countries trying to gain an economic advantage.

They opt for a pragmatic taxation policy instead. They know that, even if they wanted to, they don’t have the ability to go for your income abroad, and if they tried you could simply move elsewhere.

So, they simply tax the economic activity that occurs locally.

This means that your foreign-sourced income isn’t taxed, but if you were to buy a local apartment and rent it out, it would; the same applies if you buy a water bottle in a local store and you have to pay a VAT.

As such, locals do not tend to classify their country as being tax-free, as obviously their economic life happens most (if not entirely) within the country. Because of this, they do not benefit at all from the government’s tax policy.

However, the wealthy and mobile foreigners from all over the world, see these beneficial tax policies and decide to go where they are treated best.

Everyone involved wins – expats get to live in a desirable country with very little taxes beyond the taxed goods that they buy, while the governments get a stimulus to their local economy. 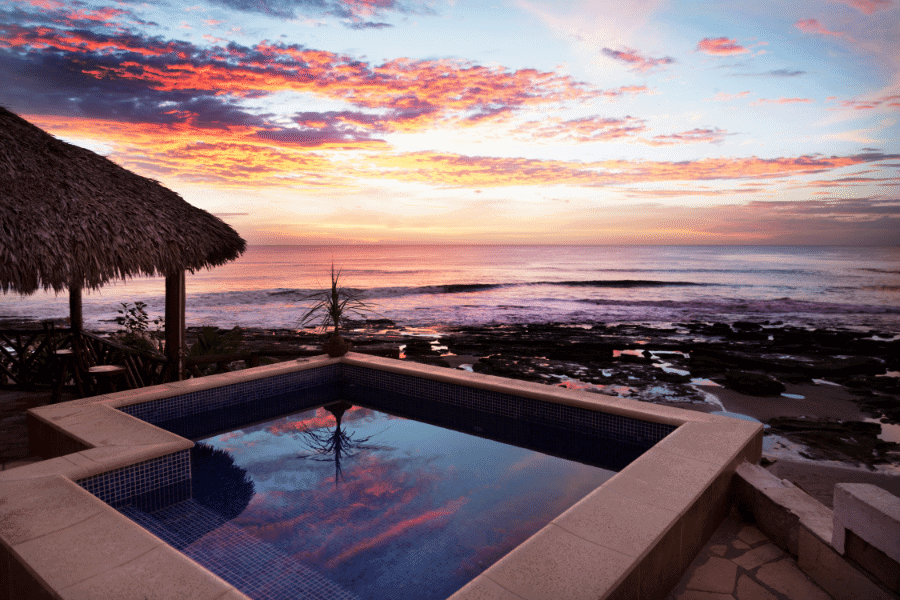 In territorial tax countries like Nicaragua, you will need to do more tax planning to live tax-free.

If you are to truly benefit from territorial taxation, however, you need to plan ahead. Every country is unique in what it counts as “local income”. In some, you might not be able to run your one-man company and be totally exempt from taxes.

But the three available options in the Americas are Costa Rica with its beautiful beaches, Nicaragua with its cheap cost of living, and Panama with its Americanized feel.

As hinted at before, it can be rather easy to emigrate to countries in the Americas, even if they are territorial tax countries – in Panama, for example, you need as little as $5,000 in a bank account to be able to get a residence permit there.

Central America is a bit of a mixed bag though. Not only is Nicaragua the one country where I have had a gun pointed at me; but in some, like Costa Rica, it is becoming increasingly difficult grant permission to live there.

I’ve personally heard of people that have had their application pending for years.

There are certainly good points for living in territorial tax countries, just be warned that it might not be as easy as Googling “US states with no income tax.”

Do you just want to live abroad and don’t particularly care about living somewhere permanently? If so, then you can take advantage of temporary tax exemptions that are available to you.

Since you will be dancing around the tax code, you do need to know your way around the subject and you might want to look over your plan with a professional.

In either case, Uruguay has a multi-year exemption for certain types of income.

Getting residency in Uruguay is relatively straightforward; anyone with a decent monthly income can qualify. As such, you can live there during the period your particular exemptions would last and then go elsewhere.

This type of travel is particularly common in places like Portugal, where it’s often used as a means of living in Europe but without the overwhelming bureaucratic hurdles.

Overall, this is an interesting option if what you’re looking for is some change but without the permanency of remaining there forever. That said, if you are in the market for an Uruguayan passport, we have covered that particular journey before.

Consider Tax-Free Countries In The Americas

Regardless of what your ultimate plan is – whether it’s lounging by the beach for the rest of your days or having a passport that you can fall back on with few drawbacks – the Americas have a tax-free country for you.

But if none of the options we’ve listed have caught your attention, there are plenty of tax-free countries in other parts of the world and different strategies we can help you implement to legally reduce your taxes. Here are some of our best articles on the topic to help open your mind to all the possibilities:

But if you need someone to help you figure it out, feel free to reach out and we would be happy to help!