The Best Tax-Free Countries In Asia For Expats

When we think about tax-free countries, our brain often goes to the Caribbean, or Europe, where a web of historical treaties, legal exemptions, and whatnot has created many areas exempt from taxation.

But one of our goals here at Nomad Capitalist is to broaden the range of choices available to us, so I want to look beyond Europe and the Caribbean and reveal to you the tax-free countries in Asia.

To paint an area of 4.463bn people with an extremely broad brush, many of the countries have only recently industrialized. So, oftentimes, they don’t have the weight of the past way of doing things holding them back.

As such, many of the assumptions we usually make for emigration are turned on their head. As a general rule of thumb, Asia is a difficult place to get citizenship but easy to immigrate to if you have money.

The Asian economy is usually entrepreneurial so they’re all too happy to let you in if you can help the local economy. Given the wide range of choices available, with some proper planning, it can be very tax-friendly.

While we usually break things down and talk about individual countries, in this article we are going to look at each type of tax policy. It is the far more useful thing to do when analyzing an area as vast and diverse as Asia.

So, without further ado, here are the type of tax-free countries in Asia and where you can find them:

One of the primary reasons a country might decide to have a zero tax policy is because they want to incentivize entrepreneurship, and/or they have income from other sources and don’t need the tax revenue.

Both of these are often true in the Middle East, where an abundance of oil has created very wealthy states without having an immediate need for taxes. As the world is increasingly shifting away from oil though, countries want to have other means of funding themselves, which usually means that they want to promote entrepreneurship.

So, while the Middle East might not be the first place you think of when you look at Asia, it is home to many of the tax-free countries in Asia and the world – including Bahrain, Kuwait, and the UAE (home of both Abu Dhabi and Dubai).

Whether you would want to live in many of these countries is another matter entirely, as some are very traditional and Westerners that can’t speak Arabic might not feel at home. I personally wouldn’t want to live in Kuwait, for example.

If the Middle East doesn’t appeal to you, you can also go to Brunei in Southeast Asia. But many of the same problems apply. I’ve only spent a few hours there, did my business and left. I wasn’t particularly convinced that it was a good place to live there either, so I will instead give you my first choice for Asian countries at this tax level.

My Personal Choice – The UAE

A good middle ground between exotic and Western creature comforts is the UAE. It’s well-used to foreign influence and English is widely spoken.

I’ve written extensively about the UAE – I’ve said it’s among the best countries for high-net-worth expats, as well as being among the most livable countries with no income tax.

We even have an extensive guide on living in Dubai

Overall, I think with the UAE corporate income tax rate of 0% plus all the other good points make it interesting enough to check out.

But like many places, there are some problems you can come across in the UAE. For example, it’s not particularly designed for a solopreneur. Instead, foreigners living there can be divided into two broad groups:

Because of this, sometimes eyebrows are raised when you try to go through bureaucratic procedures and they ask you for your employer and salary. Then, when you answer that you own your own company and the salary is whatever you choose, it adds complications to the mix. 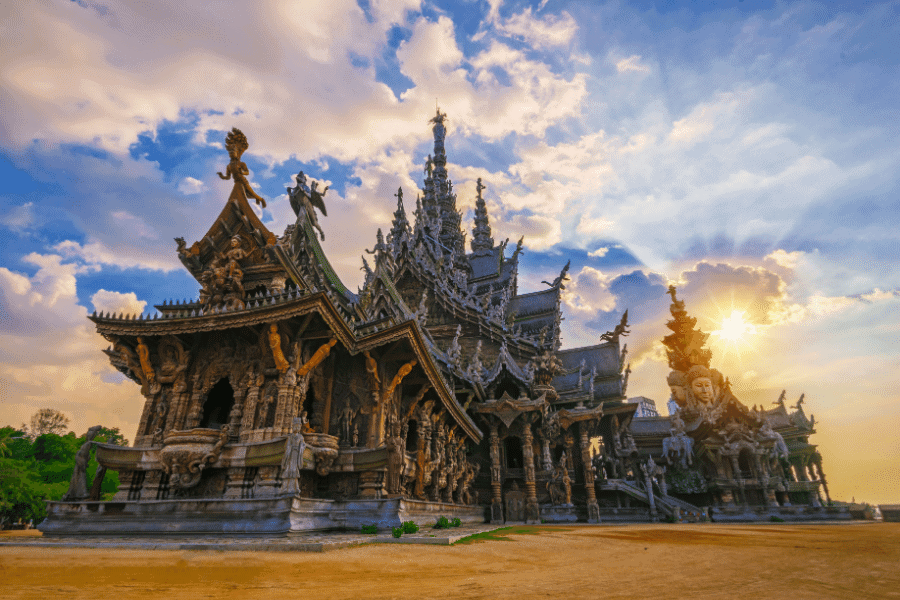 Countries like Thailand have territorial tax systems that essentially make them tax-free countries in Asia for the expats who live there and earn money abroad.

Now, here’s an option that people don’t often consider. For the average person, taxes are binary – you either live in a tax haven or you don’t.

But life is far messier and it does us no favors to simplify matters so completely to lose sight of all the wide spectrum of options available to us.

Territorial tax system countries tend not to be the strongest geopolitical players. They are often one of many similar countries trying to gain an economic advantage.

As such, in a bid to receive foreign capital inflows, they have taken the pragmatic approach.

Even if they wanted to, they know that they don’t have the capacity to go for your income abroad and if they tried you could simply move elsewhere. So, what they do is simply tax the economic activity which happens locally.

This means that your foreign-sourced income isn’t taxed, but if you were to buy a local apartment and rent it out, it would be. The same applies if you buy a water bottle in a local store and you have to pay a VAT.

Because of this, most locals would not classify their country as a tax haven because their economic life happens most (if not entirely) within the country. As such, they do not benefit at all from the government’s tax policy.

However, the wealthy and mobile foreigners from all over the world see these beneficial tax policies and decide to go where they are treated best.

It’s a win-win for both parties: expats get to live in a desirable country with very few taxes beyond the taxed goods that they buy, while the governments get a stimulus to their local economy.

From a political standpoint as well, it’s a smart move. Given that the locals are likely not aware of the territorial nature of their taxes, these policies can be enacted without summoning an angry mob.

Hong Kong is one of these “tax-free” countries in Asia and it’s among one of the best countries with a territorial tax system, though it’s not my personal preference.

The rest of the countries that follow are mostly located in Southeast Asia – Singapore, the Philippines, Malaysia, and Thailand.

But this is not a “plug and play” system, wherein you can just get a visa and live in the country without a concern in the world.

Each one is unique and will require you to investigate their specific nuances.  For example, in Thailand, money that you remit to yourself is taxable in that year.

As such, while the bulk of your wealth might be locked away in a foreign corporate account and you may pay yourself to an offshore account, the second it reaches Thai territory it becomes taxable.

Whether these are valid options for you primarily depends on how your assets and your income are structured. It might be Thailand’s corporate income tax rate or the Singapore corporate tax rate that works best for you.

However, If you have any business with these countries, it might be worth looking elsewhere, or accepting that you won’t live entirely tax-free.

And The Winner Is… Malaysia Malaysia has long been the hidden gem of Southeast Asia and is one of Andrew’s favorite bases.

Nomad Capitalist fans probably guessed the winner before even looking at the headline. It’s no secret that Malaysia – and more specifically Kuala Lumpur –  is my top pick as I personally include it as part of my Trifecta strategy.

The tropical climate, diverse wildlife, and many beautiful beaches, islands, and other natural attractions draw many tourists to the country. It also means that, when living here, you would never get bored in this diverse country.

Quite frankly, I consider Kuala Lumpur a bit of a hidden gem for expats. Perhaps it’s the food scene, maybe it’s how well connected it is to everywhere else,  but it’s a very livable city.

All in all, it’s rather easy to enjoy your time here, and even easier to get permission to live here.

Asia is the continent of the future – all the pieces are set up for an extraordinary rate of development over the next few decades.

As a general rule, Asian countries are often eager to accept foreigners with income to spend and will make their lives rather straightforward.

It may take the form of a zero-tax or a territorial tax system, but when planned for correctly, it roughly means the same. At the end of the day, you get to live in tax-free countries in Asia and enjoy the abundant life that these countries offer to expats and nomads alike.

If you would like help setting up a tax-free life in Asia or other parts of the world, feel free to reach out to our team. We help people design bespoke, holistic offshore strategies every day that do just that.