The Best Small Towns in Europe for Quiet Living

Cards on the table, I’m a big city guy. I enjoy the hustle and bustle of capital cities.

But as I grow older, I’m beginning to appreciate the benefits of something quieter as well. I’ve gone from loving New York to thinking Kuala Lumpur is a better alternative as it has the big city energy without being overwhelming.

But it’s not just that. It will be a while before I’m sent to the nursing home – I still thrive on the fast-paced energy of the city. What I’ve discovered, though, is that these smaller destinations are often far better than the capital cities of some countries.

Our Nomad Capitalist clients are commonly interested in tranquil towns with a great standard of living. So, they come asking for advice about buying a house in the French countryside.

The problem with the France Trance (in which people are enamored with the idea of having a chateau with a vineyard) is that it ignores the ugly realities of living in a high-tax, high bureaucracy western country. It doesn’t matter how cheap or beautiful it is, I would never buy property there – and the same goes for a good portion of Europe.

Most of the core EU states have policies that are counter to what we’re trying to achieve here at Nomad Capitalist. We want to live somewhere tax-friendly, with lower bureaucracy and more freedom.

So, while I see the appeal of European Permanent Residence, I don’t think it’s often worth the price of admission. Luckily though, there are several places that happen to be quiet, off the radar, hassle-free, and within Europe. Here are the best small towns in Europe for those looking to enjoy a quiet life: 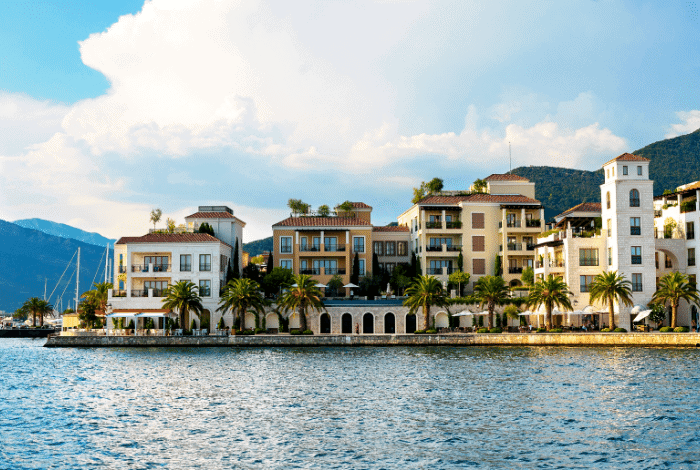 Tivat is home to just 14,000 people and a beautiful marina.

If you want the beauty of Monaco but hope to keep a lower profile, then this town in the Bay of Kotor is ideal for you. It has everything you could ever want, including a yacht club, but it barely has 14,000 people.

Tivat is surrounded by beautiful mountains with sand-swept beaches, but without the hordes of tourists you would see in comparable locations

I have a lot of experience with the country, and more specifically this town. I own a townhouse here that I occasionally visit in the summer.

The reason I like Montenegro is that it feels like being in the EU but it is still outside of its direct sphere of influence.

Owing to a bout of hyperinflation in the ’90s, following the fall of Yugoslavia, the country began to take on the Deutsche Mark, and then the Euro as its official currency to stabilize its economy.

Unsurprisingly, shortly thereafter, it began talks for accession into the EU.

Hence, the country is in a state of change that currently gives it all the benefits of being within the EU without the negatives, like bureaucratic overreach.

The one mark against this location is that, since it uses the Euro, it’s not one of the cheapest places in Europe, or at least the Balkans.

But it more than makes up for it by being very business-friendly, and it is among the best places to live in Europe.

And to top it all off, for a short period of time, you can qualify for citizenship by investing in real estate in Montenegro. So, if you decide to live in this peaceful town on the marina, you might as well pick up a second citizenship while you’re at it! 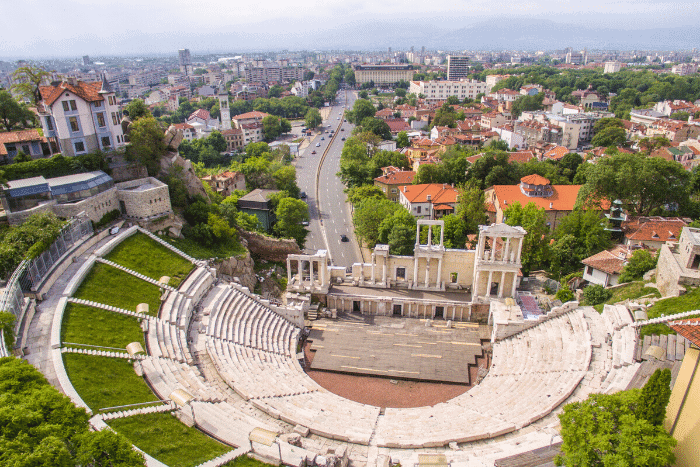 Plovdiv was the 2019 Capital of Culture.

If your definition of the best small towns in Europe includes a city with both history and culture, there are few better than Plovdiv in Bulgaria. It’s much quieter than the capital Sofia.

While not at the top of the list for most people, those in the know think this is a hidden gem. Digital nomads from around the world have flocked here in droves because of its easy-going life.

In Plovdiv, not only will you be within the EU, but it’s far freer, open, and tax-friendly. It also doesn’t have the attitude problem that you would otherwise see in some European countries where they pretend to be too proud to speak English.

English is widely spoken in the country, and if you are interested, you can even gain citizenship via investment here.

The distances in the city center are quite walkable and cars have been barred from downtown, allowing you to admire the 2019 European capital of culture with the peace it deserves.

If you would like to live amongst Roman ruins and beautiful nature, there are few cities better than Plovdiv. If you’re looking for sun, sand, and good internet, you’ll find it all in Portimao.

By now, the Portugal Golden Visa program is famous. But I think that, unfortunately, the program has overshadowed the great points in favor of living in the country.

Portimao is the second biggest city in the Algarve region, and while the whole area is worth checking out, I would like to single out this specific city.

The town was historically a fishing and shipbuilding center, but it has since developed into a tourist area famous for its beaches. It has sun year-round and life is very affordable and laid back.

Furthermore, the city has good internet, which allows you to run an online business quite easily. Add to that the fact that Portugal does not charge tax on cryptocurrency returns and it starts to become an exciting option for people in the tech space.

The main problem is that, unless you are willing to fly with budget airlines like Ryanair, it’s very difficult to get in or out. 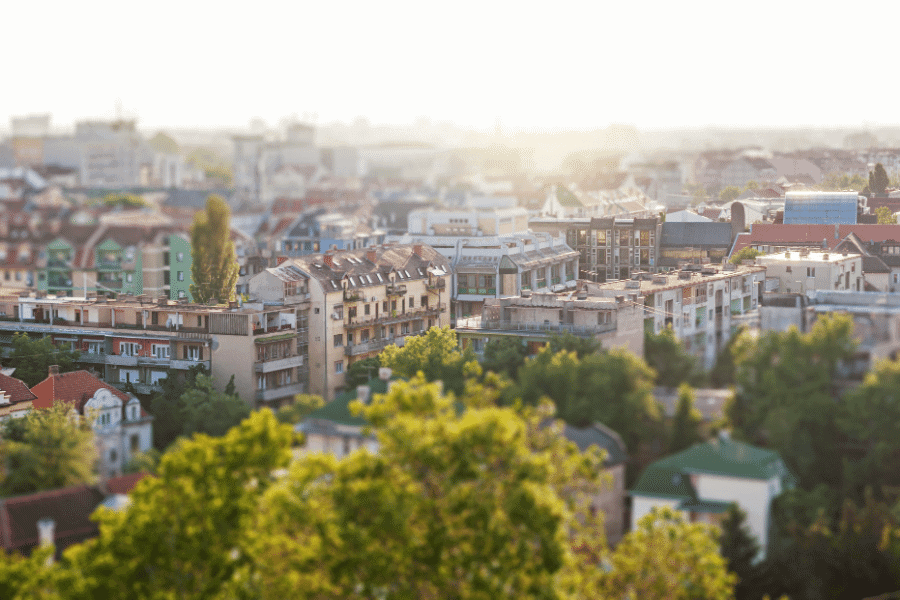 Novi Sad becomes a city-wide garden in the summertime.

If you want to live in the outskirts of Europe but in a country with a lot of developmental potential, then Serbia is the place to be.

The capital city of Belgrade has a great vibe, but the hidden gem of Serbia is Novi Sad.

During the summer, it’s an idyllic place to live. It feels as if a garden has been converted into a city. Beautiful nature surrounds every street.

It’s as cheap as it gets for living in Europe, partially owing to the fact that its main inhabitants are students of the local university. You can also find numerous bars and cafes.

There are few tourists overall and it truly still feels like traditional Eastern Europe without the Kitsch that you would see in other countries.

It’s also worth mentioning that Serbia offers a second residency if you purchase any kind of real estate.

Perhaps it’s not the most dynamic of towns, but it’s beautiful with easy access to Belgrade, which does have more hustle and bustle if that’s what you’re after. 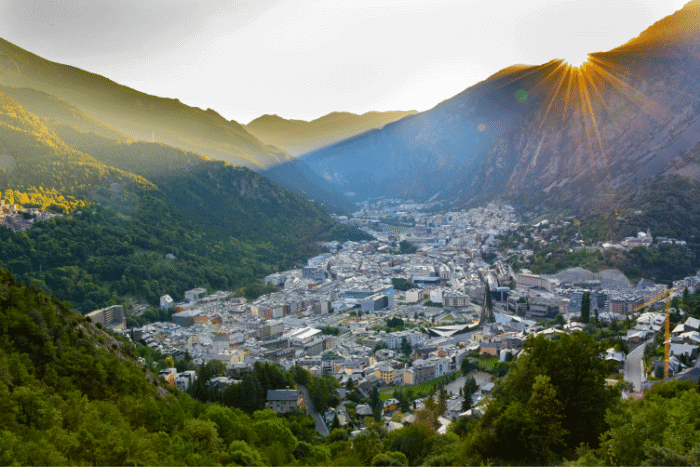 Europeans come from all over to shop in Andorra.

Nestled between France and Spain, this tiny country used to be a tax haven until very recently. It was eventually bullied into submission by the EU until it had some semblance of taxes.

But even at a maximum 10% income tax rate, it’s still a very attractive location and among the countries in Europe with the lowest tax rates.

The demand for such a desirable location, however, is countered by a rather expensive and difficult immigration process.

If you manage to overcome those difficulties, you will be rewarded with access to a city in the crossroads of some very enviable locations.

Drive south and you will reach Barcelona in under three hours; head northeast and you’ll find yourself in the South of France; and if you head west, you’ll be in some of the world’s most beautiful national parks.

Besides that, Andorra itself is a shopper’s paradise and its low VAT of 4.5% means that people from all over Spain and France go there specifically to shop.

You can have all the benefits of living in the middle of the EU, at a stone’s throw away from interesting locations, but without the high taxes and needless bureaucracy.

I understand the appeal of living in the European countryside, with its historical towns, easygoing life, and beautiful nature. But don’t just go for the most obvious option. I would advise you to look harder.

If you go for the obvious choice, chances are that you will not only end up with something far more expensive than it’s worth, but you will also end up in crowded tourist traps. Besides, more often than not, these locations have a lot of bureaucracy and taxes.

From the Nomad Capitalist perspective, the best small towns in Europe are those that offer the same charm and tranquility without the same taxes and bureaucracy.

Europe is a continent full of variety and unique historical background. Each location also offers different legal and tax situations that may benefit you or prove to be a detriment.

That is why you shouldn’t simply take the first option that is offered. Don’t follow the crowd. Find the right place for you, your goals, and your dream lifestyle.