The 6 Best Places to Live in Montenegro for Expats

I’ve been talking about Montenegro as a lifestyle destination for Nomad Capitalists for years.

Sure, they make it ridiculously easy to plant your business flag in the country by letting you set up a company with almost no hassle.

And yes, they have the appeal of single-digit corporate and income tax rates in Europe.

But the cherry on the top of all that is that Montenegro is simply a great place to spend at least part of your year.

I’ve been a big fan of Montenegro for a long time. Back in 2006, Montenegro was a new country that had just separated from what was previously Serbia and Montenegro. That year, it made its world debut in the James Bond movie, Casino Royale.

If you haven’t been to Montenegro, I can tell you that nothing that they showed you in the movie is correct.

In the movie, there’s a beautiful Western European train whizzing down the tracks at high speed. There’s no such thing in Montenegro. It shows the Hotel Splendid, which is actually a real hotel, but it doesn’t look like what they show you in the movie.

If you’ve only seen Montenegro in the movies, you definitely need to check it out for yourself. While it won’t look like it does on the silver screen, you won’t be disappointed. There is a reason why it is becoming an increasingly popular place.

But where should you live in Montenegro to achieve the lifestyle you desire?

In this article, I will walk you through all the different places you might want to consider if you want to live in Montenegro and enjoy a luxury lifestyle.

WHERE NOT TO LIVE IN MONTENEGRO

That said, Montenegro is not a panacea. No country can ever offer you everything you need. That is why our mantra to “go where you’re treated best” involves diversification in many forms.

Montenegro, for example, may not be the best place for everyone to start a business but it is an interesting place to go and spend some time. I personally have a home there and I spend a part of most summers there.

And while I will cover many of the places that you will likely want to visit, I will not be including locations in Montenegro’s north country. They are trying to develop Kolasin into a ski resort and there’s also Nikšić and Cetinje (which they call the royal capital), but for most Westerners, these are not going to be interesting places to live.

I would also not recommend the capital city of Podgorica in the south, which is probably the most boring capital city in all of Europe. The only time you will want to spend there is the hour or two you have to be at the airport before your flight leaves.

With that said, here are the six best places to live in Montenegro: 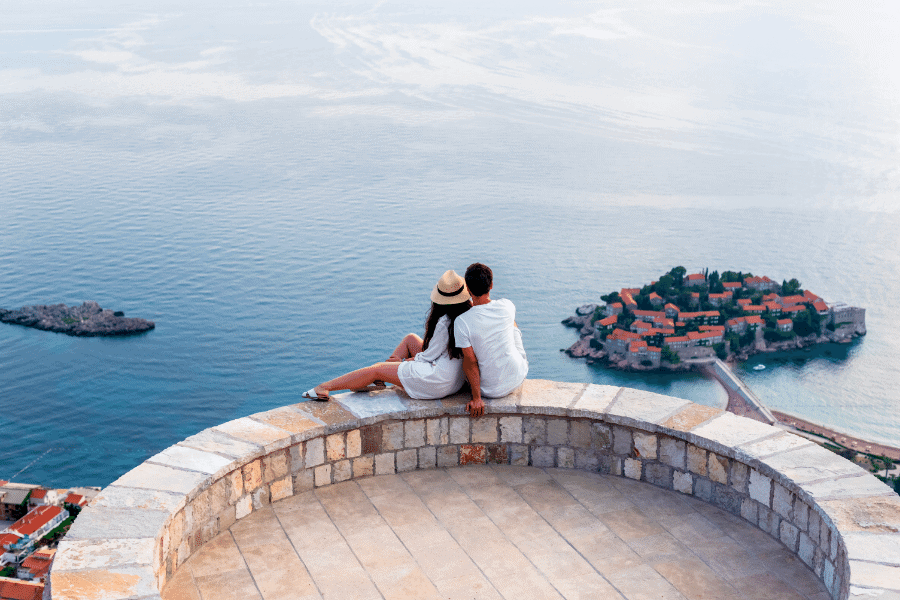 The small islet of Aman Sveti Stefan just six kilometers south of Budva is a beautiful place to settle down if you’re looking for somewhere to live in Montenegro.

The best places to live in Montenegro will be along the coast. Probably the most popular area among foreigners is the Budva area near the city of Budva.

I happen to think that it has the nicest of the old towns because it’s so bright and sunny there. Budva is a bit touristy in the summer, though. Up until recently, they had 10,000 full-time Russian families living there – although some of them have left due to Montenegro joining NATO.

But Budva has this kind of international vibe.

In this region, you will find beach areas, a little marina, luxury hotels, and luxury shops. The Dukley Gardens are especially beautiful and picturesque.

You can find million-euro condos in this area and more and more buildings are going up in Budva.

I’ve never liked Budva as much for investments, however. While you have so much more room to build and more room for expansion and you can build all over the place, a lot of people in the region have told me that they don’t like Budva anymore. They remember when it was much smaller. Now, they don’t want to go to this tourist trap.

But if you like partying or you like a more international scene and want to live directly in the old town, Budva is where you want to go. 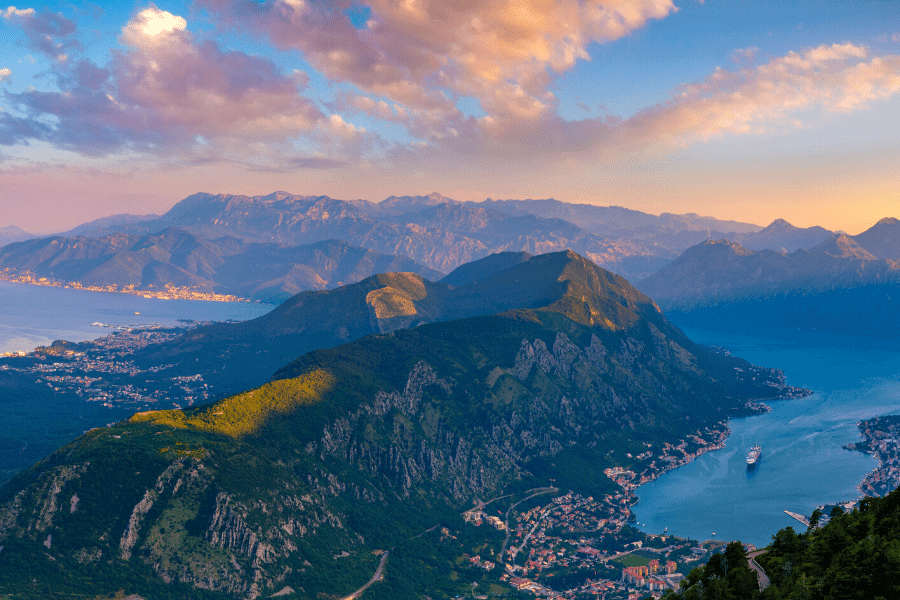 Kotor Bay is an impressive region along the Adriatic Sea full of sun, water, and mountain grandeur.

I live in Kotor Bay (Boka Kotorska), which is like a fjord where you have one side facing out to the Adriatic and one side is enclosed. The UNESCO World Heritage Site of Kotor is located there and there are a lot of cruise ship passengers that come in during the summers.

For my taste, it’s a bit too dark. There’s not enough sun coming down.

It’s a cute place to visit, though. Some people love living there. My parents really liked the charm. There are many beautiful places to walk around there.

If you go a little bit past Kotor, you reach Dobrota, which is a nice family area. People with money can buy a nice house there.

But if you keep driving along the outer parts of the bay, you’ll run into Orahovac, which is another area that I wouldn’t recommend going to if you’re coming to Montenegro for the first time. There aren’t as many amenities there. 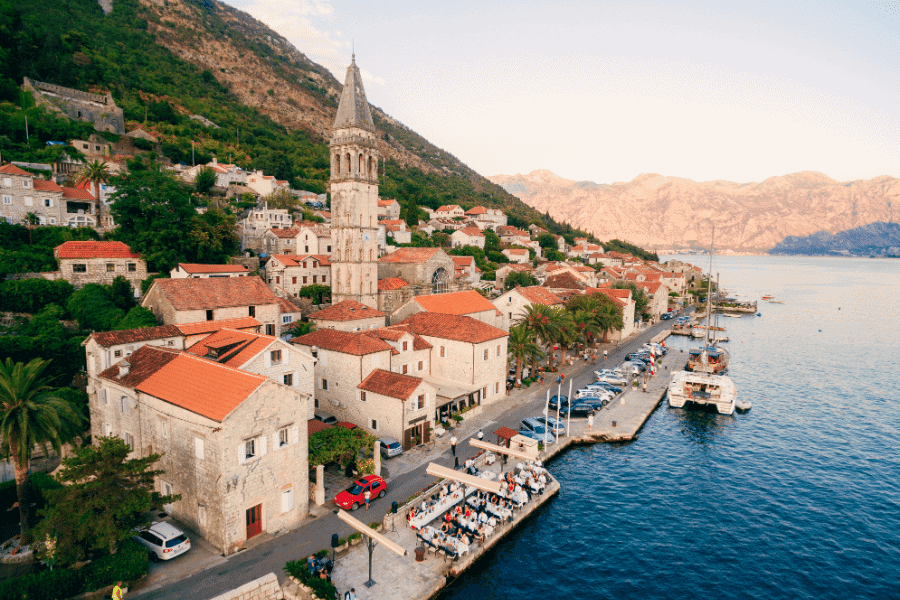 Perast is a lovely town on the far end of Kotor Bay, perfect for those looking for a quiet place to live in Montenegro.

There are some up-and-coming areas in the far reaches of Kotor Bay, but most are not ideal locations for expats looking for a life of luxury.

The exception would be Perast.

Perast is a very tiny UNESCO World Heritage Site on the opposite side of the bay. If you have a lot of money that you want to put into a home, this would be a beautiful place to settle down.

For the most part, however, I would recommend staying around Kotor of Dobrota. Or, I would go further inland to Muo. North of that is Prcanj and then Stoliv.

Families tend to prefer the calmer side of the bay in towns like Prcanj. There are lots of local restaurants there and it has more of a local feel. There’s a lot going on in the summer, but it’s still relatively calm. And then you have the placid waters of the bay that aren’t affected by the larger sea, all of which make for a great combination for a tranquil, luxurious lifestyle. 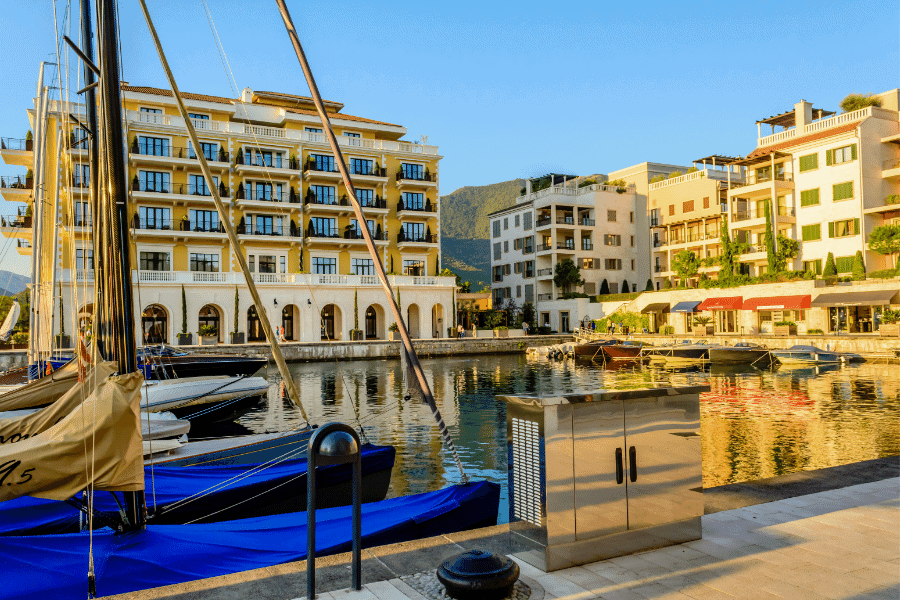 Tivat offers a world-class yacht harbor to expats looking for a luxurious location to dock.

On the other side of Kotor Bay is Porto Montenegro, which is the only platinum-certified marina in Tivat with some of the most beautiful yachts harbored there. There are also plenty of pedestrian shopping areas, beautiful restaurants, and the five-star Regent Hotel.

There is a kind of luxury vibe in Tivat, even more so than what you will find in Budva.

Next to Tivat is Donja Lastva, which looks out to the wide-open sea.

Both areas are also right near Tivat Airport, so it’s easy to just fly in if you’re coming from other places in Europe or Belgrade, and then it would be just a 5 to 10-minute drive to your house if you live in that area. 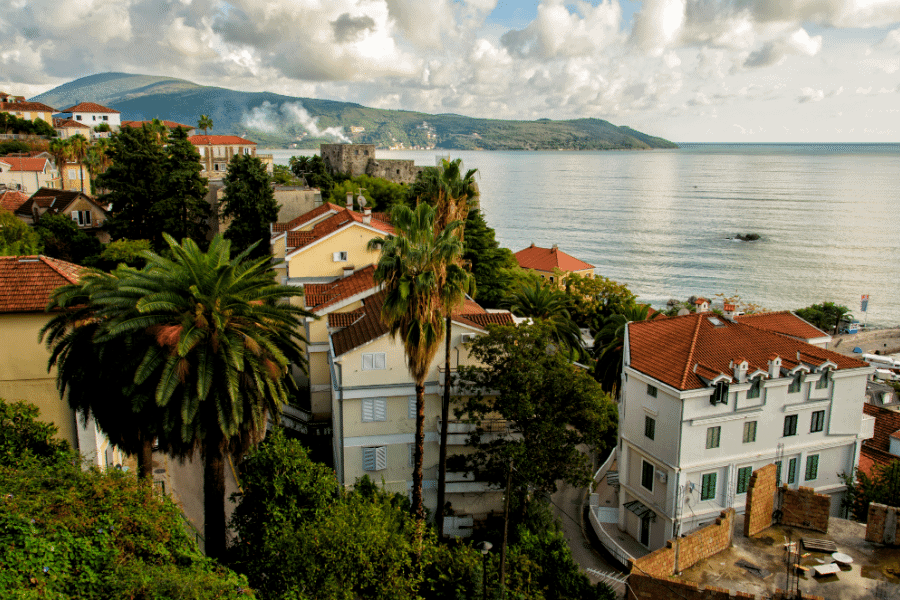 Land is more readily available (and cheaper) in Herceg Novi.

If you’re looking for something a bit more affordable that feels more local and has more services, Herceg Novi is closer to the Croatian border.

It’s not exactly my cup of tea, but it’s a cute old town.  A lot of people who like Croatia appreciate that it’s just a drive right over the border.

It’s in the middle between the Tivat and Croatian airports. It’s not super convenient, but a lot of Serbians like to go there.

You’re probably going to pay a little bit less in Herceg Novi. You can buy more readily available land which is not available in the main areas of Kotor Bay. (They’ve been building up the hill but there’s only so much land on what is essentially a fjord.)

Herceg Novi is cheaper, so, if that’s what you’re looking for or you want something that’s a bit further out of the way, it’s a good option. 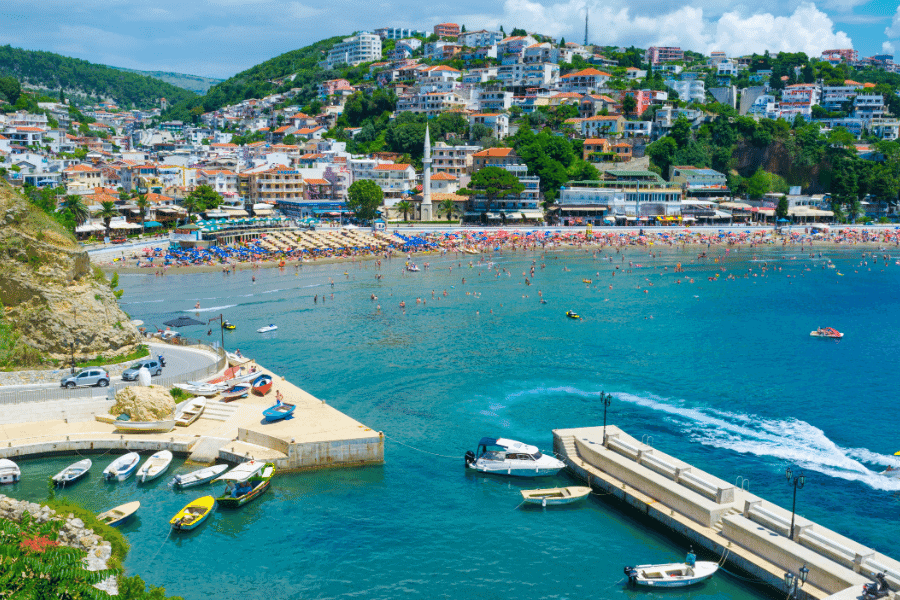 If you are considering Ulcinj, look into nearby Albania where you’ll find a similar culture but cheaper prices than if you were to live in Montenegro.

The real wild card that was brought up to me when I met with the government a couple of years ago is Ulcinj, which is on the South Coast near the Albanian border.

Ulcinj has more of an Albanian feel. The big plus is that it has a sand beach (a lot of people don’t realize that most of the beaches in Montenegro are rock beaches.)

While the government says that they like people to go and invest there, there are a few downsides. You’re halfway between the Tirana Airport in Albania and the Tivat Airport. It’s not really close to much of anything. It’s got a different vibe.

If you think you want to live there, I would just go and buy in Albania, which is much cheaper.

Montenegro has much more of a European feel. They claim they are going to join the EU.

It’s really a matter of what you’re looking for. Ulcinj is this wild card if you want something that’s cheaper, something that’s closer to Albania. It’s a place the government is claiming that they’re putting some effort into.

Reasons to Live in Montenegro

Montenegro is not the only place for affordable luxury living in Europe with beautiful beaches. In fact, Montenegro is not a super cheap place. They use the euro, which means everything from groceries to land is going to be a bit pricier than other countries in the region, especially if you live along the coast or are there in the summer.

If you want better deals, places like Albania are up-and-coming and offer much better prices.

Even so, a lot of people over the years have been coming to Montenegro from Turkey, Russia, the UK, and Albania.

Montenegro is a nice place because they are more business-friendly there than they are in Croatia or a lot of the other European beach hubs.

Montenegro is trying to attract wealthy people to bring their money through measures like having no tax on yacht fuel. People will bring their yachts to fuel up and they’re bringing their business to Montenegro.

Overall, Montenegro is a great place to consider. If you are interested in seeing how Montenegro could fit into your holistic offshore plan, feel free to reach out for our help.