The 4 Best Places to Live in Malaysia for Nomads

For years, I’ve been telling my readers, viewers, and clients that Malaysia is a great, business-friendly, affordable, and pleasant place to live as a Nomad Capitalist, whether it’s full-time or as a part-time base in your personalized Trifecta strategy.

We’ve even discussed in great depth how to obtain the 10-year Malaysian My Second Home (MM2H) visa, which I personally use to live in Malaysia for part of the year.

But where exactly can you live in Malaysia?

Are there other cities that you should be considering besides Kuala Lumpur?

In this article, I will discuss all the best cities and places where I would suggest that Nomad Capitalists consider as a place to call home in Malaysia.

WHERE TO LIVE IN MALAYSIA

Not everyone likes to live in big cities. Some people want a suburban environment, some want the beach. Everyone’s a bit different. Hopefully, you’ll be able to find a place that can best fit your needs on this list.

The Borneo part of Malaysia is made up of Sabah and Sarawak. There are a few places in this part that you might want to live in. The tax haven Labuan is there. Brunei is a tiny little sultanate stuck in the middle. But there aren’t as many opportunities for most people to live there, so I would focus on Peninsular Malaysia.

Within that region, there are four main places that I would recommend: Kuala Lumpur, Penang, Langkawi, and Malacca. 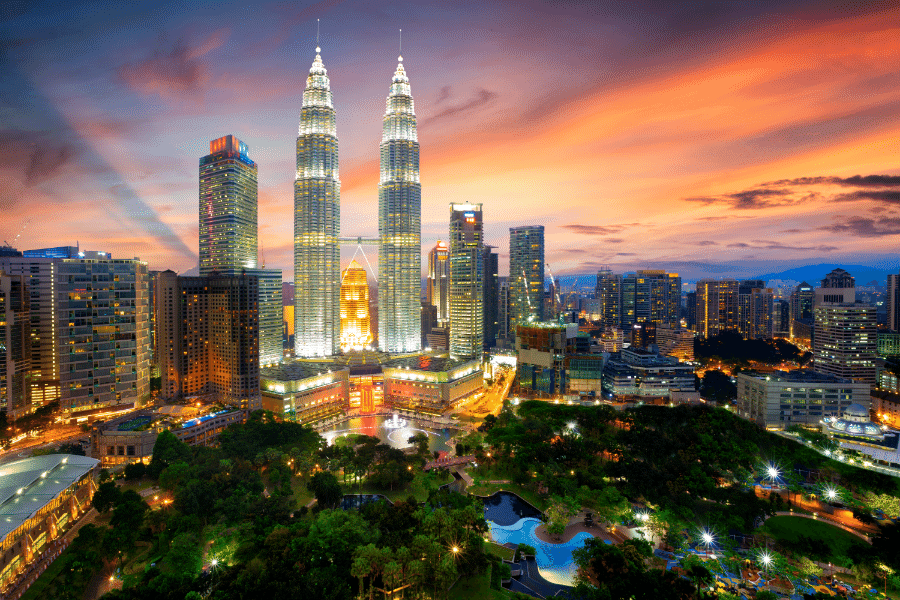 Given past British involvement in Malaysia, you can get by solely speaking English here, especially in KL.

This is the main city. It’s the hub. It’s got all the consumer conveniences. There are malls at every corner. If you like shopping, if you like eating, it’s all there.

Kuala Lumpur has a great airport that’s well-connected both regionally and globally.

Everything here is very pleasant. For a big city, the people are very nice.

You can live in KLCC (Kuala Lumpur City Center). That’s where you can find the Petronas Towers, the KLCC park, all the embassies. It’s the commercial city center.

Other commercial centers are coming up. They’re building a new Tun Razak Exchange a bit further away. It’s an up-and-coming area.

Mont Kiara is like the biggest cul-de-sac of Malaysia. It’s a place where you probably need to have a car to live there.

These are the kinds of places I would start looking at.

If you’re a wealthy local, you might live somewhere like Damansara in Petaling Jaya. That’s more of a home place to live.

What’s interesting about Malaysia, is that you can buy an actual home, or as they call it, a landed property. You don’t have to live in an apartment. You can rent a home. You can even buy a home because foreigners can own land in Malaysia. It’s one of the few places in Asia where you can do that. Even in Kuala Lumpur, there are opportunities to buy land and own a home.

These areas that I mentioned are where I would start.

You can read more about living in KL in my guide to this hidden gem for expats living in Asia. 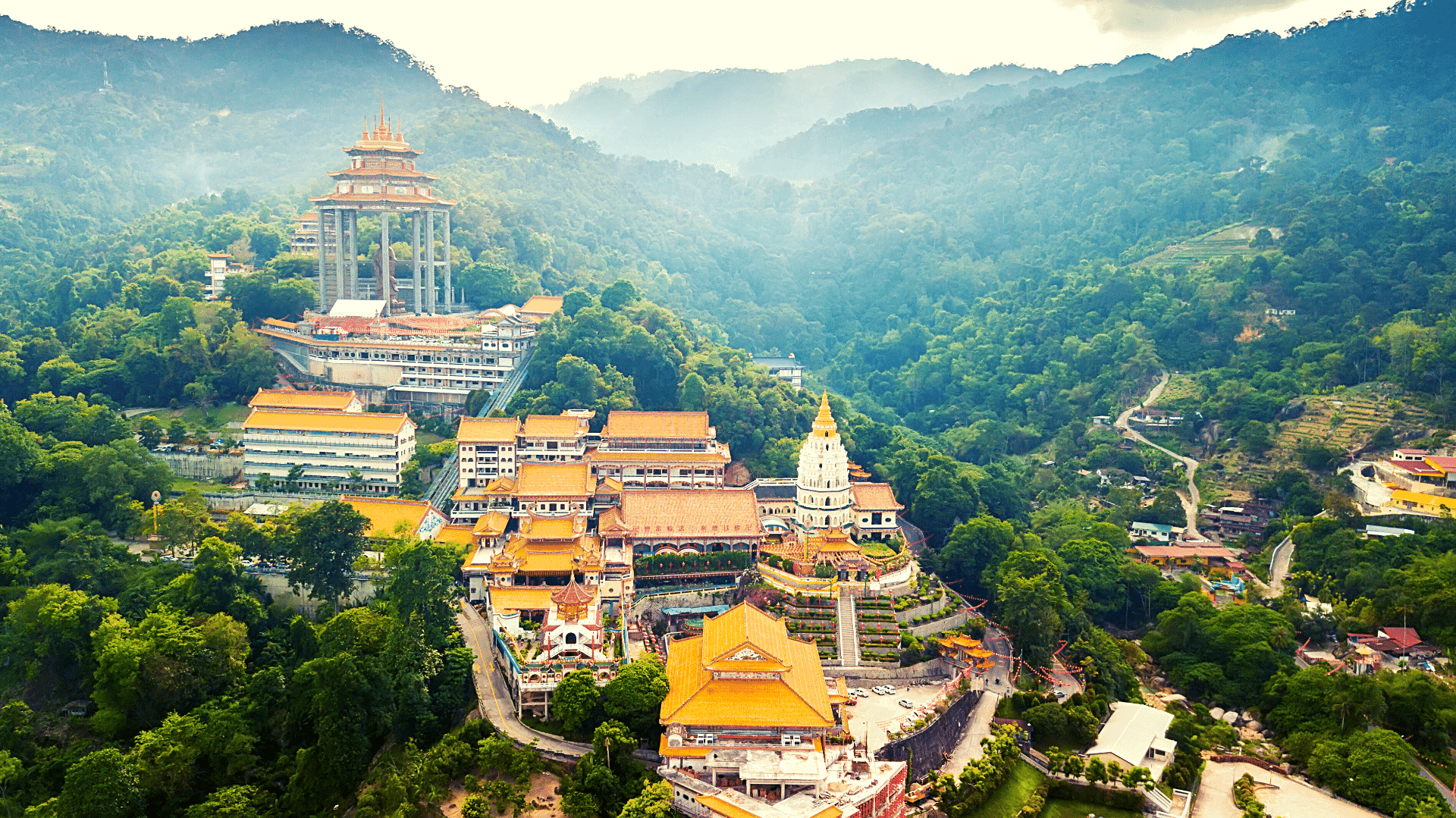 Penang is a more rural location, but a great option for those looking to be closer to the beach.

If you like more of a traditional Southeast Asian vibe and you want to be near the water, then I’ve advised people to look at Penang.

Penang is basically the one majority Chinese part of Malaysia. Malaysia has numerous different ethnic groups. In most places, Malays are the dominant group but Penang is a dominantly Chinese state.

The part of Penang you would generally live on is an island connected by a bridge. It’s not a tourist island. It’s the second-largest metropolitan area in the country.

You’ve also got a beach. If you drive around the coast, there’s Batu Ferringhi and other different areas along the coast where you can actually live right there, on or near the beach. You can find a villa or a sea view apartment. Or, you can find places near the city center.

If you feel connected with water – some people are used to being around water – Kuala Lumpur is kind of close to the water. The closest place to the beach that most people go to would be Port Dickson which is about an hour away.

But if you really want to be on the water, then you want to look at Penang. 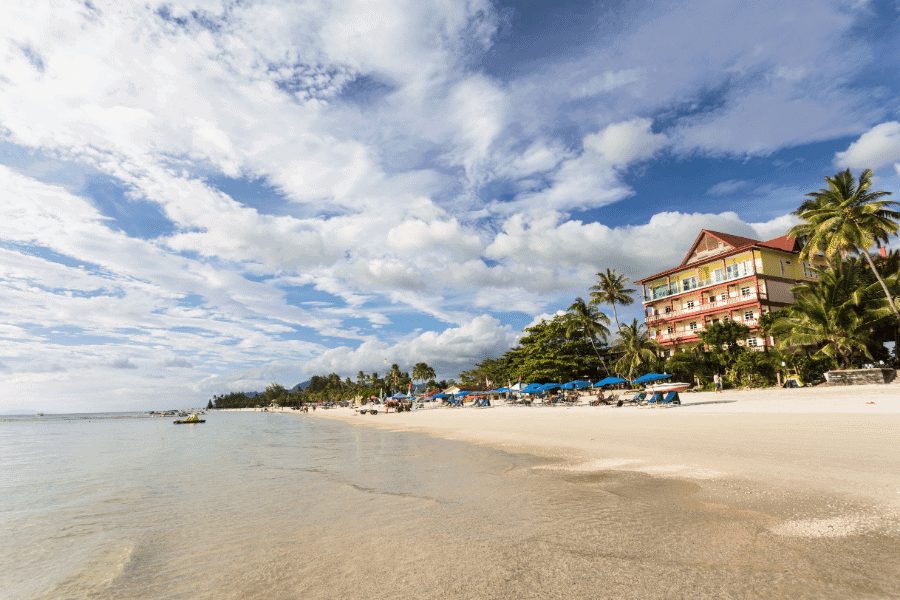 Langkawi is a popular resort destination but is also a great place to live in Malaysia.

If you want to be in a resort area, you can go to the island of Langkawi.

Langkawi is a duty-free island in Malaysia. It’s located in the Andaman Sea up very close to the Thai border.

If you like buying cheap booze or cosmetics, that’s why people go there. You can buy everything duty-free and then bring it back to wherever.

Langkawi is a lot more remote and has more of a rural feeling. That’s certainly changing as they’ve gotten a lot of development in recent years. They are building many hotels there these days, including five-stars hotels. They’ve also built more properties, like sea view condos and villas that you can find for sale.

The challenge in Malaysia (which isn’t really a challenge) is that properties tend to be larger. In many other Asian cities, you’re going to be jammed into a shoebox apartment or a three-bedroom that might only be 700 square feet.

Langkawi has a much more laid-back slow pace of life. In Kuala Lumpur, you’re spoiled for choice. In Langkawi, there are fewer options.

It’s a village of sorts. You can drive around and see that the people live in a more village-type atmosphere but they do so in concert with the tourists.

Langkawi is a place where the internet is a bit slower. Life is a lot slower.

It is also located on the water. Some parts of the island have nicer beaches than Penang. If you’re looking for the ultimate best beach and willing to make some sacrifices for it, I imagine it’s like living on one of the smaller islands in Hawaii or one of the south pacific islands.

In both Penang and Langkawi, we are seeing more services show up. Qatar Airways is flying there now and there are more international connections. You don’t have to go to Kuala Lumpur first to be able to get anywhere else.

But while there is more available now for getting in and own, Kuala Lumpur is still the most developed area out of these places. 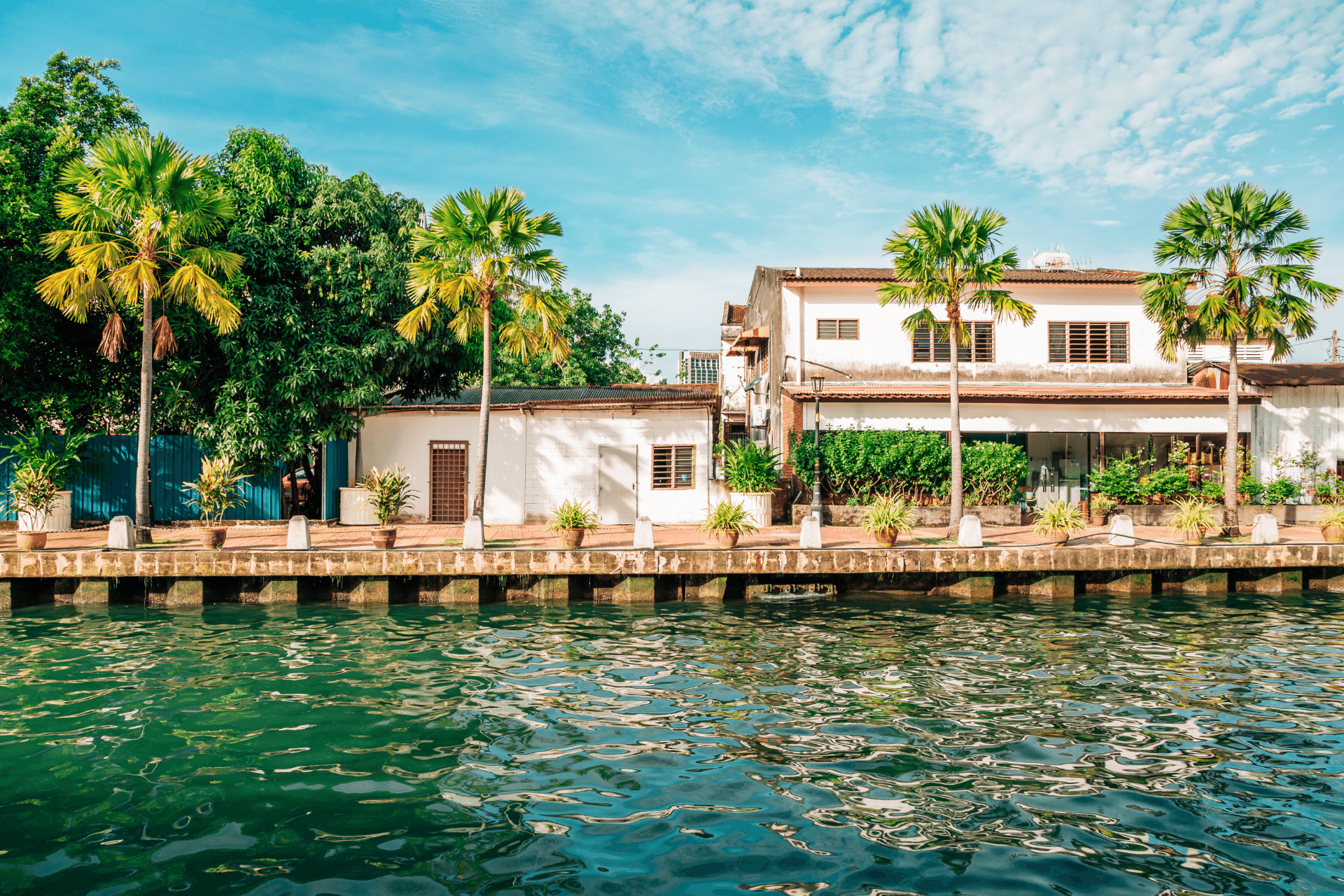 The Malacca River flows through this Malaysian city where you can own a large, landed property.

Malacca is more of a wildcard. It’s a great weekend destination.

I know there are a few expats who live there.

Malacca is located on the water right on the coast of the Strait of Malacca which divides Malaysia and Indonesia. It’s about two hours south of Kuala Lumpur.

This a place that many expats might want to consider as a home base. Malacca has more of a Southeast Asia backpacker feel. There is a variety of many interesting cultural influences, from Malay to Portuguese to Dutch.

Malacca is a good place if you want a bit of a slower pace of life. It’s a little more disconnected. Things are a bit slower. Still, you’re not going to be that far away from the KL airport.

OTHER PLACES TO LIVE IN MALAYSIA

If you want to really go your own way and build a villa, you can find land in some of the up-and-coming beach areas. Other places include Terengganu or Kuantan. There are some areas on the east coast that we’re starting to see more hotels open up and more tourism attractions are developing in this area.

Johor Bahru is another large city where probably most Westerners don’t want to go.

In Malaysia, it’s pretty easy to get around by air. If you’re looking for something kind of off the beaten track, you’re not going to have that many expats living there or as many Western conveniences. Those are other wildcards you can look at if you’re looking to do something away from it all.

There are other places in Malaysia that might just be nice for you to visit for a weekend. For me, that’s Malacca, the Cameron Highlands, or Ipoh.

DO YOU WANT TO LIVE IN MALAYSIA?

There are a lot of beautiful places in Malaysia. You’ve got many options. For most people, it will come between Kuala Lumpur versus Penang with some of the smaller beach outposts as wildcards.

But there are many options to choose from.

The bottom line is that if you come to Malaysia, you’ll be able to find a place that has what you’re looking for.

Malaysia can be a great place for you to live full time, part-time as part of your Trifecta strategy, or just to visit. If you’re looking into coming up with a holistic plan to delve further into the Nomad Capitalist lifestyle, you can contact us here.