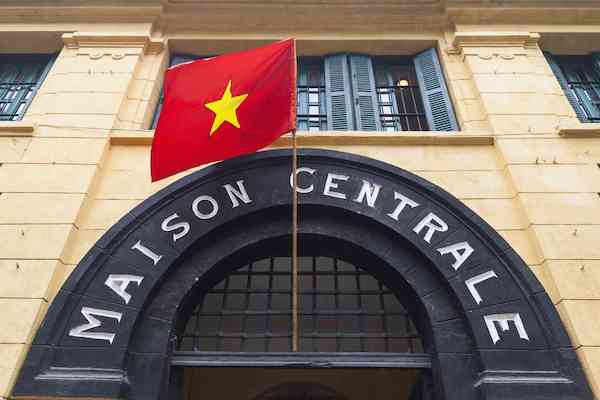 Here in Hanoi resides a large building that, although quite significant historically, has faded into relative obscurity.

And yet, it has a tale to tell.

It is most famous in the West as the “Hanoi Hilton,” the name given to it by American POWs between 1964 and 1973 during America’s war with Vietnam. US Congressman John McCain was famously held here after his plane was shot down, as were many other US pilots.

When the prison was built by the French in 1896, during their occupation of Hanoi, it was named the “Maison Centrale.” They used it initially to incarcerate Vietnamese insurrectionists from the Cần Vương movement.

But it has a third name, given to it by the Vietnamese themselves — Hỏa Lò Prison — after its location.

Today, a version of the prison’s history can be found in books written by the Vietnamese. They’re filled with condemnations of the horrible conditions in the prison, as imposed by the French. In these books, the Vietnamese prisoners are described as “brave patriots” and the French as “ruthless.”

The [French] Prison administrators were cunning and experienced jailers, cruel overseers, and stool-pigeons together with a harsh detention regime and subhuman conditions, plus turning Hỏa Lò into a “hell on earth.”

And to be sure, an inspection of the prison today reveals inhumane standards by anyone’s measure.

But in 1945, the French were overthrown, and, in a few months, Hỏa Lò was operating under the aegis of the Vietnamese government.

So what became of the prison? Did its new management change its policies? Well, this was put to the test in the 1960s, when it was used to house American pilots as prisoners-of-war.

The pilots had been captured after their bombers had been downed by Vietnamese anti-aircraft. It’s safe to say that the Vietnamese did not feel kindly toward their new prisoners, given that the pilots had just invaded North Vietnam, dropping bombs and napalm on villages filled with women and children.

But the same books that describe the French management of the prison cover the Vietnamese handling of it:

When the Vietnamese are writing their own history, they describe themselves not as brutal captors, like the French, but as something resembling councilors at a holiday camp.

Of course, those US servicemen who were imprisoned at the Hanoi Hilton have offered a different appraisal. The Vietnamese jailers have been said to have “used extreme methods of torture on Americans to extract information.”

We spent 42 months in solitary confinement, with our legs either shackled in cuffs or put in leg stocks at the bottom of our “beds”—little more than cement slabs. Starvation, isolation and torture were constant companions.

So it would appear that there’s a bit of fibbing here somewhere. Not all of the above can be true.

In reading the Vietnamese government’s version of history, it would be understandable for the Vietnamese people to feel proud that their leaders were just and humane, especially after such abuse at the hands of the French and Americans.

But of course, the American view is quite different. Lieutenant-Commander John McCain died as a revered war hero due to his detention at Hỏa Lò—a reputation that helped elevate him to the US Senate and nearly to the presidency.

And so, it would be understandable for the American people to feel proud of Senator McCain and the other pilots who suffered imprisonment at the Hanoi Hilton.

The trouble is that there’s no resemblance whatsoever between the two versions of the story.

Of course, the Vietnamese version has been touted by US leaders as “communist propaganda,” and that may well be true.

But the Vietnamese leaders might say that the American history books are filled with glowing reports of the just and humane treatment of prisoners, which they would, in turn, say is untrue.

And at this point, any well-informed American might wince as he recalls the stories of US torture of Iraqi prisoners at Abu Ghraib, a prison that was described by the US as being infamous under Saddam Hussein but humane under the American conquerors.

Unfortunately, films of the US torture at Abu Ghraib leaked out, ending the question of whether the US victors were any better than their predecessors.

And then there’s the niggling remembrance of waterboarding at Guantanamo, a prison located in Cuba. Even President Obama, who campaigned to end the waterboarding at Guantanamo, failed to deliver on his promise once he was president. In fact, when he visited Cuba on a goodwill tour in 2016, the Cuban government placed the return of Guantanamo to its rightful owners — Cuba — at the top of their list for the discussion agenda. They were told that Guantanamo was decidedly off the list for discussion.

So what can we take away from this? Are there good countries and evil countries?

Well, no. Governments, the world over are, and have been since time immemorial, agents of force and brutality. Each is concerned with its own dominance. For each, its treatment of those who are imprisoned is stark evidence of their lack of humanity. They tend to treat those whom they regard as supporters (the producers and taxpayers) with grudging tolerance, but their true nature is invariably evident when we observe how they treat those from whom they can extract neither votes nor wealth.

They can also be counted on to paper over their sins for the sake of a clean image.

For those of us who are British, our own Winston Churchill is both “the man who saved England in the war” and a military leader who gave not a second thought to sending tens of thousands to their graves in a self-promotion effort.

As he correctly stated, “The victors write history.”

Here in Hanoi, that fact is starkly evident.

That’s precisely why New York Times best-selling author Doug Casey and his team just released an urgent new PDF report that explains what could come next and what you can do about it. Click here to download your free copy now.