Gold used to be important.

During and after World War II, every major developed country amassed as much physical gold as they could. It stabilized currencies and signaled independence.

But with the end of the gold standard in 1971, most countries began to sell off their reserves.

So much so that in 1999, an agreement was formed to limit the amount of gold that central banks could sell. Fast forward to today, and Canada’s central bank owns ZERO gold.

Despite the agreement, most countries continued to shed their gold reserves as fast as possible. 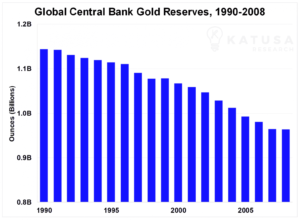 That is until a few years ago, when a handful of countries reversed course. Central Banks started buying gold with fury, and they haven’t let up since.

In the final quarter of 2018, central banks purchased more gold than in any other quarter on record.

By the end of the year, central banks collectively held around 1.064 billion ounces of gold (equivalent to 33,200 tons).

That’s about one-fifth of all the gold ever mined.

In the first half of 2019, central banks purchased 11.97 million ounces of gold (374 tons). Once again, that was far more than ever before. And it’s equivalent to one-sixth of total gold demand in that period.

And total central bank gold purchases for 2019 were the second highest they’ve been in the last 50 years (2018 being the first).

And the Keyser Söze of gold is Vladimir Putin.

I’ve been very quiet about Russia and Putin the last few years as I’ve been swamped with media requests following the success of my NY Times Bestseller The Colder War.

Don’t underestimate what the Russians are doing, as others are starting to follow…

While the world focuses on China, Russia has positioned itself at the center of the global political chessboard.

These are places you’d never expect.

Putin is undertaking what’s called a “de-dollarization.” Aware of sanctions from the United States, Russia is positioning itself to not be dependent on U.S. Dollar holdings.

So, the central bank in Russia has sold nearly all of their U.S. Treasury notes. And it’s used the proceeds to buy gold.

Like I said, the Keyser Söze of gold is Vladimir Putin.

Pay attention to the world’s master strategist. This is very bullish for gold. 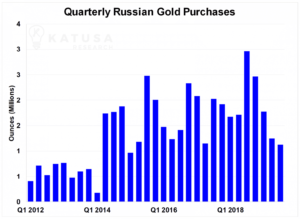 You might be wondering why Russia doesn’t buy a yielding investment with the cash.

The problem is that other reserve currencies, like the euro or the yen, are extraordinarily weak against the dollar and Putin knows this will continue.

Russia bought $100 billion worth of euros, yuan, and yen in 2018… the Keyser Söze of gold won’t make that mistake again.

And over eleven trillion U.S. dollars’ worth of global investment opportunities have a negative yield. So Russia would end up paying money to hold them.

Gold, on the other hand, has paid off handsomely for Putin.

In 2019, the value of Russian-held gold has increased from $86 billion to more than $112 billion. The rising gold price has generated a windfall for the Russians of nearly $20 billion that the Russians can leverage.

The problem is that Russia’s buying is fairly well-known. Unless it continues to step up gold purchases, its effect on gold prices has mostly already been taken into account.

With WuFlu (the Coronavirus) now having infected more people than SARS did in 2003, will China continue their gold purchases?

Well, you’ve probably heard the saying, “He who has the gold, makes the rules.” Xi Jinping, President of China, agrees with Putin’s strategy.

WuFlu no doubt has sidetracked China here in the near term, but it’s been proven that the gold insurance strategy is a very wise one.

The Chinese elite are aware of their aging demographics and high debt loads.

The gold will be valuable to potentially backstop any shortfalls without being overly dependent on their foreign exchange reserves.

China is diversifying its foreign exchange reserves away from the USD and towards gold. This will take many years, but it’s a sound strategy.

The major Western countries hold upwards of 60 percent of their foreign exchange reserves in gold.

China knows it has to pick up its gold to reserves ratio and WuFlu will accelerate this belief.

The chart below shows where Russia and China will want to be at—with the western superpowers. They will get there. And the price of gold will be positively impacted as a result. 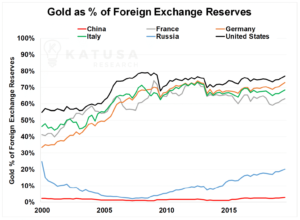 Of course, China has much larger foreign exchange reserves than most other countries. So its gold holdings represent a lower percentage of its total reserves.

But even when looking at actual gold holdings, you can see that China and Russia have long lagged behind the west. Only now are they catching up. 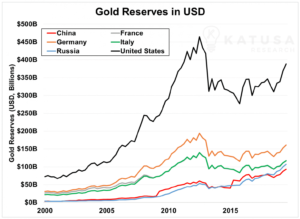 If – and it’s a big if – China were to shoot for the same gold-to-forex reserve ratio as the United States, that would take 1.98 billion ounces of gold (62,000 tons) of gold off the market—or fourteen years’ worth of 100% of the world’s gold demand.

The subsequent rise in the price of gold would be unlike anything the world has ever seen. But it seems impossible… right?

Not only that, but China has a much longer-term vision in mind with their gold purchases.

According to one of my favorite people to debate on stage at conferences, Euro Pacific Capital CEO Peter Schiff, Russia and China are “preparing for the world where the dollar is no longer the reserve currency.”

China can’t do this, and they know it. Peter knows it too, until China’s reserves grow 10-fold.

In short, China and Russia want a world where the U.S. dollar is no longer the reserve currency.

To do that, both Russia and China (specifically China) have a lot of gold buying to do before they can realistically back up their currency.

It won’t be a return to the gold standard, certainly. It will be more of a “gold support.”

So here are the trillion-dollar questions: exactly how much gold is China planning to buy?

And what will it do to the price of gold?

The problem with China is that it doesn’t update its gold reserve numbers very often. When the numbers are updated, their accuracy is impossible to verify.

Real gold reserves are one step towards building that trust.

China buys its gold extremely quietly via back channels to avoid running up the price via its purchases. (Remember Kazakhstan’s huge gold buys? Guess who they share a border with…)

From 2009 to 2015, the Chinese government didn’t provide any updates about its gold holdings. Then it suddenly announced a massive 57 percent jump in its reserves.

Zhang Bingnan, vice president of the China Gold Association, forecasted the optimal gold reserve capacity for China for the next two decades…

That means it would need to buy 128 million ounces (4,000 tons) at a minimum, this year, to meet Zhang Bingnan’s optimal rate.

But even that would be short by 1.77 billion ounces to meet the ratio that U.S. reserves are at.

Another way to look at it is, even if China doubles their gold reserves, they’re still short of meeting the same ratio as the United States by 93%.

A Dragon’s Appetite for Gold

According to a precious metals analyst at Standard Chartered Bank…

Just to achieve the diversification it’s looking for, China would need to buy two years of global gold production.

In short, when China really starts buying, it’s not going to be able to disguise it any longer. And that could cause a run on gold like the world has never seen before.

Central reserve banks are already snatching gold up at record levels… when prices are at record levels. These central banks themselves anticipate prices going much, much higher.

When central reserve banks begin to see gold both as diversification, insurance and leverage there will never be enough of it to go around.

And with any shakiness in the global economy, it’s going to matter a lot more.

Editor’s Note: In this shaky economic environment, big buyers like China and Russia, are accumulating as much gold as possible.

It’s no question that negative interest rates and the devaluation of currencies will only put fuel on the fire.

In a newly released video, Legendary speculator Doug Casey and resource expert Marin Katusa breakdown exactly what is coming, and exactly how you can profit from the rally in gold. Click here to watch it now.