On the Ground in Hong Kong 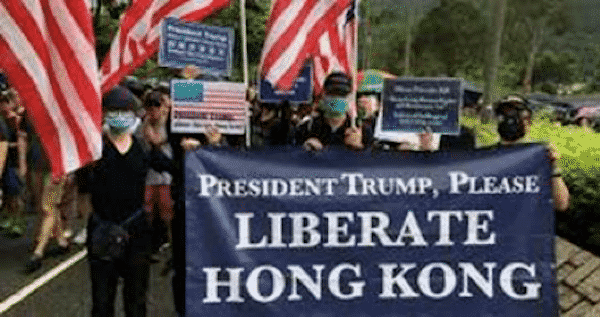 Throughout the world, the media televise weekly reports on the protests in Hong Kong. Developments have remained highly visible, courtesy of regular demonstrations that take place like clockwork, every weekend in the business district of the city.

And these are not small demonstrations. A crowd of up to two million has gathered on at least one occasion. Although they began in the thoroughfare that divides the Admiralty from the government offices, they’ve spread east and west for a mile or more along the thoroughfares of Connaught Street, Harcourt Street and Gloucester Road.

Further, the demonstrations have occurred consistently, each weekend for several months, ensuring that the media have fodder each week for yet another update.

Another interesting aspect of the demonstrations is that, although demonstrators pack the thoroughfares each Saturday and Sunday, they’ve all left by Sunday night. The cleanup crews then come in, and by the start of the business day on Monday, all traces of the latest demonstration are gone. The litter has been removed, traffic on the thoroughfares is moving smoothly, the taxis are flowing to the Exhibition Centre and travelling businessmen are in no way hindered in their visits.

Each weekend, a major protest takes place but doesn’t impede the progress of business in a city that’s built upon business. Quite extraordinary.

So, what’s going on here? How is all this possible? Does it happen spontaneously?

Here, on the ground in Hong Kong, these questions are not immediately answered. Instead, the plot thickens, adding layers at every turn.

The leader of the demonstrators, or at least their self-appointed mouthpiece, is a college student, Joshua Wong. Although only twenty-two, he’s been an activist since he was seventeen. Interviews with him from those days show a very bright and well-informed young man who was very concerned about his native Hong Kong being transformed.

But since the demonstrations started, Mister Wong’s tone has changed dramatically. Where he once offered well-reasoned discussion, he now specializes in rhetoric and dogma, with revolutionary demands. He’s refused all requests to talk with the Special Administrative Region (SAR), Hong Kong’s territorial government, or its head, Carrie Lam. He instead has insisted repeatedly that a letter he once sent to the SAR government has never been answered, and unless his demands in that letter are fully met, no discussions will occur.

Further, although violence on the part of the protesters is steadily increasing, including attacks on police, the hurling of gasoline bombs, setting fires, the vandalizing of dozens of subway stations and assaults on those of differing opinions, Mister Wong declares that these occurrences are not an issue. Although these acts have provoked increased responses by police, Mister Wong insists that only the police retaliation is at issue.

This is not a diplomatic path to conciliation, but an assurance that the crisis will worsen.

On SAR’s side of the issue, we have the China Daily. The 18 September edition features a cover article that begins:

With his innocent schoolboy look, student activist Joshua Wong is attempting to woo the world into believing that Hong Kong is a city where the basic rights as stipulated in the Basic Law are eroding as fast as global warming is causing the ice caps to melt.

The more businesslike South China Morning Post features Carrie Lam’s Town Hall meeting in which she met with and addressed a large cross-section of individuals. She called attention to her withdrawal of Beijing’s Fugitive Offenders Ordinance, which originally sparked the demonstrations. But stating that she did not intend to cave in to other demands that have arisen since then, she has affirmed that, “Self-rule and autonomy for Hong Kong is not feasible.” She does, however, state that China intends to maintain “one country, two systems.”

And here we have the ongoing centre of concern of the people of Hong Kong. Having spent ninety-nine years as a British territory, they fully intend to dig in their heels on the 1997 reunification deal with the People’s Republic of China – that Hong Kong returns to the motherland but retains a separate system of governance for a further fifty years. Hong Kong is understandably suspicious of Beijing, as President Xi Jinping has repeatedly declared that he intends to reunify all of China to its former greatness, including both Taiwan and the city on the bay that was a British territory for ninety-nine years.

So, the key issues are somewhat complex but quite understandable, whether we, as individuals, sympathise with the goals of Beijing or the people of Hong Kong.

Most of us in the West would support the latter objective. However, there’s a rather large wrench in the works – that of US involvement. Although this is clearly a sovereign matter between Beijing and its Hong Kong territory, the US Congress has sought to pass a US law that decides what should occur in China, a separate sovereign state.

Coincidentally, Mister Wong has been on a road tour of Europe and America to promote the passage of such legislature, stating that the West must step in and take control.

The China Daily, in recent issues, has commented, “Needless to say, Washington very much intends to play the ‘Hong Kong card’ to contain China.”

And this is quite so. Washington is doing all it can to place a wet blanket on China’s rise as the world’s foremost economic power, and this has not gone unnoticed in either Beijing or Hong Kong.

The China Daily further comments that “it would be nothing short of a fantasy to expect Washington to ‘liberate’ Hong Kong….”

And yet, it does appear that that may be the US objective. Certainly, the plethora of US flags and professionally produced Trump banners being carried by some groups of protesters had to be supplied by someone. And clearly, very substantial funding is covering the enormous cost of all the infrastructure that’s necessary to move and maintain hundreds of thousands of protesters each weekend.

A major portion of the protestors are students. Many of them here on the ground in Hong Kong state that they advise their parents that they’re going on weekend “basketball trips” or similar pursuits, then change their clothes into the black-masked outfits that have become the protesters’ uniforms.

While their sincerity is unquestionable, the students certainly lack the funding for their weekend activities.

As Deep Throat famously said in the film, All the President’s Men, “Follow the money.” Indeed, almost invariably, the source of the money generally reveals the driving force behind the events.

Editor’s Note: The escalating situation in Hong Kong is bringing to light China’s growing dominance in the region—and more broadly in the world.

The rivalry between the US and China is getting intense. The battle for who will be the world’s top power is playing out right before our eyes.

It could all lead to a complete economic collapse, unlike we’ve seen before. That’s why, Doug Casey and his team just released an urgent new video. Click here to watch it now.