Obeisance to the “Greater Good” 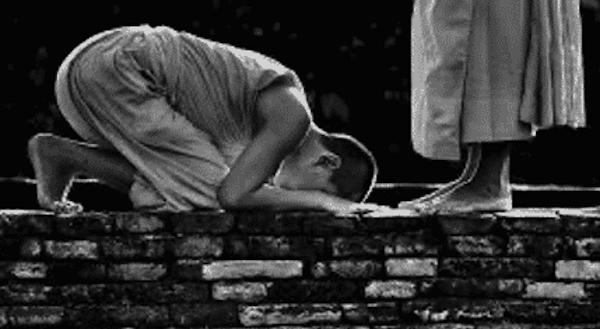 Most people in the West are familiar with the biblical story of Moses. In this tale, a spiritual leader, chosen by God, leads his people out of Egypt to the promised land.

The Israelites are saved. God provides Moses with a list of commandments that they are to live by – pretty basic stuff: Don’t kill people, don’t steal or lie, don’t cheat on your spouse, etc.

But interestingly, the second commandment exhorts the Israelites not to create false gods, nor to bow down to nor serve them.

Unfortunately, when Moses was away, the Israelites did create a false god. They couldn’t resist the very human urge to have a visible deity that would hopefully provide them with good times, as long as they were willing to prostrate themselves before it.

And past eras are filled with such stories – naïve pagans sacrificing animals and humans to the deities in the hopes that they would provide rain, a good crop, healthy babies, freedom from inter-tribal aggression, etc.

We can look upon otherwise-advanced cultures such as the Egyptians, the Romans, the Aztecs, etc., and shake our heads at their naivete. All of them created great ceremonies that involved blood sacrifices, in order to appease the deities.

So, how are we doing? Have we banished paganism from the modern world?

Well, unfortunately, no. We may live in a more technological age, yet human nature remains the same. Those who are not highly focused within themselves have the perennial tendency to want to put their faith in some magical entity out there who will smile upon them and make all the bad things go away.

But even more astonishing is the fact that, just as in days of yore, a majority of people are quite prepared to suspend logic in order to believe in such pagan deities.

A quick peek at the current religion of Climate Change reminds us of this.

It began as “Global Cooling” but fell flat since a solar warm spell happened to occur just when the concept was introduced. It took the Global Cooling scammers over a decade to decide that they were on the wrong track, but when they did, they changed the name of the conceptual deity to “Global Warming,” to match the existing weather conditions. But unfortunately, a cyclical solar cooling period was due to arrive and Global Warming failed to match the new weather conditions.

Time to give up and admit that a false deity had been imagined? Not at all. A further new name was given to the deity – Climate Change – that would encompass literally anything that happened in the weather. From that day forward, the prophets attributed every earthquake, every typhoon, every drought to the Climate Change deity. Every meteorological event therefore provided “proof” of man-made Climate Change.

And like the Pharisees of old, the Climate Change prophets proclaimed that the natural disasters were due to the sins of the population – that they were being punished by the deity… for driving SUVs and relying on coal for heating.

And people bought it, as they always do. “The end of the world is nigh” has sold well for millennia. Paganism works every time.

And as any Climate Change activist will proclaim, “We must make sacrifices.”

The gods must be appeased and the prophets will always assure the tribe that a sacrificial offering is necessary to accomplish this.

Thankfully, in this particular case, all that’s required to appease the god is to pay a carbon tax. It’s not clear how this will end Climate Change, but… have faith and pay.

But Climate Change is a mere carnival sideshow in comparison to the main event.

Mankind has always had amongst its number those individuals (roughly four percent, according to studies) who are sociopathic, who are obsessive in their desire to control others, whilst having little or no emotional capacity to be concerned about the genuine welfare of the populace.

In tribes, these individuals strive to rise to the top. In larger communities, they tend to form groups to provide leadership, and as any community grows large enough, sociopaths rise in prominence, to form and expand governments to rule their minions.

But along the way, some members of the hoi polloi may at times say, “Hang on a minute – why should we let the leaders dictate to us whilst they live off the fruits of our labour?”

And invariably, neo-paganism is trotted out to fill its perennial role.

The populace is reminded that, without obeisance on their part, there would be chaos and all would suffer. Therefore, all must sacrifice for the sake of “the common good.”

The reader might recall Hillary Clinton commenting in 2004, “We’re going to take things away from you on behalf of the common good.”

Mrs. Clinton was very up-front about the intention of the State, echoing predecessors such as Karl Marx, Adolf Hitler, Josef Stalin and a host of Caesars.

Most all political leaders have the same intent, although they’re generally a bit more subtle in their language. (A veiled intent attracts a greater number of willing followers.)

The result is also perennial: The tribe accepts a condition of increased taxation and regulation and thereby becomes increasingly enslaved and subservient to the leaders.

After all – to refuse obeisance would be to endanger the common good – to invite chaos.

But how are we to know when we’ve reached this point of subjugation? At what point do we go beyond “willing contributors” and degenerate into “servants of the rulers?”

Thomas Jefferson made this distinction, circa 1800. He said, “When the people fear their government, there is tyranny; when the government fears the people, there is liberty.”

When he and his cohorts formed the United States, their primary goal was to do away with obeisance to any government. At the close of the Constitutional Convention in 1787, Benjamin Franklin was asked by a delegate, “What have we got?”

Mister Franklin replied, “A republic… if you can keep it.”

But the republic, as anticipated, devolved into a mere democracy, which then further eroded into a plutocracy/bureaucracy – rule by the very rich in the form of a central banking cartel, enforced through non-elected officialdom.

Obeisance to any “greater being” is regressive, whether that greater being is a deity or a government. Liberty is, by definition, the state of being free within society from oppressive restrictions imposed by authority on one’s behavior, views, or way of life.

Editor’s Note: The wave of political correctness and liberal group-think has taken the US by storm. The effort to silence opposing viewpoints and free speech will continue to accelerate. That’s why Doug Casey has prepared a timely video on surviving this modern American trend. In it Doug exposes the lies and mainstream bias that’s poisoning America… Click here to watch it now.