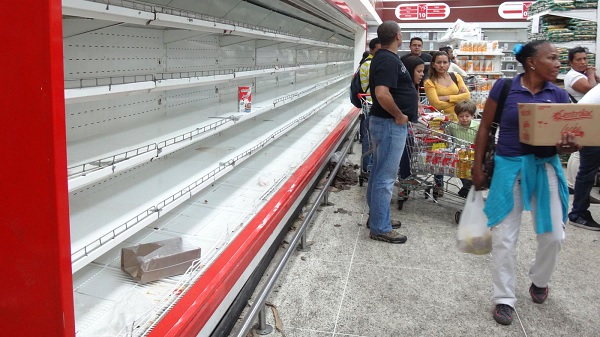 In 1906, Alfred Henry Lewis stated, “There are only nine meals between mankind and anarchy.” Since then, his observation has been echoed by people as disparate as Robert Heinlein and Leon Trotsky.

The key here is that, unlike all other commodities, food is the one essential that cannot be postponed. If there were a shortage of, say, shoes, we could make do for months or even years. A shortage of gasoline would be worse, but we could survive it, through mass transport or even walking, if necessary.

But food is different. If there were an interruption in the supply of food, fear would set in immediately. And, if the resumption of the food supply were uncertain, the fear would become pronounced. After only nine missed meals, it’s not unlikely that we’d panic and be prepared to commit a crime to acquire food. If we were to see our neighbour with a loaf of bread, and we owned a gun, we might well say, “I’m sorry, you’re a good neighbour and we’ve been friends for years, but my children haven’t eaten today – I have to have that bread – even if I have to shoot you.”

But surely, there’s no need to speculate on this concern. There’s nothing on the evening news to suggest that such a problem even might be on the horizon. So, let’s have a closer look at the actual food distribution industry, compare it to the present direction of the economy, and see whether there might be reason for concern.

The food industry typically operates on very small margins – often below 2%. Traditionally, wholesalers and retailers have relied on a two-week turnaround of supply and anywhere up to a 30-day payment plan. But an increasing tightening of the economic system for the last eight years has resulted in a turnaround time of just three days for both supply and payment for many in the industry. This a system that’s still fully operative, but with no further wiggle room, should it take a significant further hit.

If there were a month where significant inflation took place (say, 3%), all profits would be lost for the month for both suppliers and retailers, but goods could still be replaced and sold for a higher price next month. But, if there were three or more consecutive months of inflation, the industry would be unable to bridge the gap, even if better conditions were expected to develop in future months. A failure to pay in full for several months would mean smaller orders by those who could not pay. That would mean fewer goods on the shelves. The longer the inflationary trend continued, the more quickly prices would rise to hopefully offset the inflation. And ever-fewer items on the shelves.

From Germany in 1922, to Argentina in 2000, and to Venezuela in 2016, this has been the pattern whenever inflation has become systemic, rather than sporadic. Each month, some stores close, beginning with those that are the most poorly capitalised.

In good economic times, this would mean more business for those stores that were still solvent, but in an inflationary situation, they would be in no position to take on more unprofitable business. The result is that the volume of food on offer at retailers would decrease at a pace with the severity of the inflation.

However, the demand for food would not decrease by a single loaf of bread. Store closings would be felt most immediately in inner cities, when one closing would send customers to the next neighbourhood seeking food. The real danger would come when that store also closes and both neighbourhoods descended on a third store in yet another neighbourhood. That’s when one loaf of bread for every three potential purchasers would become worth killing over. Virtually no one would long tolerate seeing his children go without food because others had “invaded” his local supermarket.

In addition to retailers, the entire industry would be impacted and, as retailers disappeared, so would suppliers, and so on, up the food chain. This would not occur in an orderly fashion, or in one specific area. The problem would be a national one. Closures would be all over the map, seemingly at random, affecting all areas. Food riots would take place, first in the inner cities then spread to other communities. Buyers, fearful of shortages, would clean out the shelves.

Importantly, it’s the very unpredictability of food delivery that increases fear, creating panic and violence. And, again, none of the above is speculation; it’s a historical pattern – a reaction based upon human nature whenever systemic inflation occurs.

Then … unfortunately … the cavalry arrives

At that point, it would be very likely that the central government would step in and issue controls to the food industry that served political needs rather than business needs, greatly exacerbating the problem. Suppliers would be ordered to deliver to those neighbourhoods where the riots are the worst, even if those retailers are unable to pay. This would increase the number of closings of suppliers.

Along the way, truckers would begin to refuse to enter troubled neighbourhoods, and the military might well be brought in to force deliveries to take place.

But why worry about the above? After all, inflation is contained at present and, although governments fudge the numbers, the present level of inflation is not sufficient to create the above scenario, as it has in so many other countries.

So, what would it take for the above to occur? Well, historically, it has always begun with excessive debt. We know that the debt level is now the highest it has ever been in world history. In addition, the stock and bond markets are in bubbles of historic proportions. They will most certainly pop.

With a crash in the markets, deflation always follows as people try to unload assets to cover for their losses. The Federal Reserve (and other central banks) has stated that it will unquestionably print as much money as it takes to counter deflation. Unfortunately, inflation has a far greater effect on the price of commodities than assets. Therefore, the prices of commodities will rise dramatically, further squeezing the purchasing power of the consumer, thereby decreasing the likelihood that he will buy assets, even if they’re bargain priced. Therefore, asset holders will drop their prices repeatedly as they become more desperate. The Fed then prints more to counter the deeper deflation and we enter a period when deflation and inflation are increasing concurrently.

Historically, when this point has been reached, no government has ever done the right thing. They have, instead, done the very opposite – keep printing. A by-product of this conundrum is reflected in the photo above. Food still exists, but retailers shut down because they cannot pay for goods. Suppliers shut down because they’re not receiving payments from retailers. Producers cut production because sales are plummeting.

In every country that has passed through such a period, the government has eventually gotten out of the way and the free market has prevailed, re-energizing the industry and creating a return to normal. The question is not whether civilization will come to an end. (It will not.) The question is the liveability of a society that is experiencing a food crisis, as even the best of people are likely to panic and become a potential threat to anyone who is known to store a case of soup in his cellar.

Fear of starvation is fundamentally different from other fears of shortages. Even good people panic. In such times, it’s advantageous to be living in a rural setting, as far from the centre of panic as possible. It’s also advantageous to store food in advance that will last for several months, if necessary. However, even these measures are no guarantee, as, today, modern highways and efficient cars make it easy for anyone to travel quickly to where the goods are. The ideal is to be prepared to sit out the crisis in a country that will be less likely to be impacted by dramatic inflation – where the likelihood of a food crisis is low and basic safety is more assured.

Editor’s Note: Unfortunately most people have no idea what really happens when a currency collapses, let alone how to prepare…

We think everyone should own some physical gold. Gold is the ultimate form of wealth insurance. It’s preserved wealth through every kind of crisis imaginable. It will preserve wealth during the next crisis, too.

How will you protect yourself in a crisis?

New York Times best-selling author Doug Casey and his team just released an urgent new guide called Surviving and Thriving During an Economic Collapse that will show you exactly how.