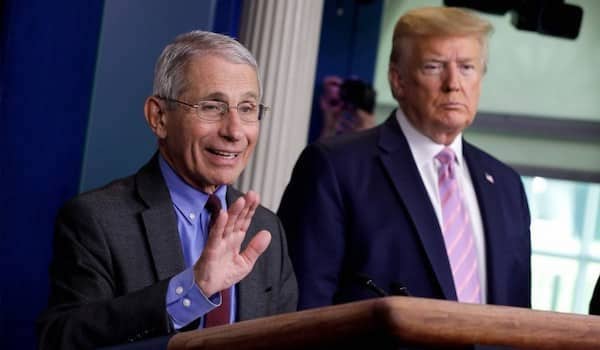 In October of 2019, the Military World Games were held in Wuhan, China, with military personnel from over one hundred countries participating. Possibly coincidentally, Wuhan is the foremost centre for virus research in China.

Soon after that event, the coronavirus broke out in Wuhan.

China said, “It’s not a problem – we got a handle on it.” The Chinese government lied, as most all major governments do when faced with a large, sudden problem that makes them appear weak to other nations.

The problem spread. The media in other countries focused on other issues, with only the occasional mention of COVID-19 until the virus was suddenly reported to be in a score of counties around the world. Apparently, unwitting travelers, in a couple of months, had spread it worldwide.

Then something much more peculiar than a seasonal virus occurred.

In the US, a doctor whose career had been in the government since the Reagan administration, was brought forth as the unquestioned expert. Like the experts chosen by other countries, he warned of massive deaths, a possible 2,000,000 deaths if no shut-down was done, but saying it could be lower – 100,000 to 200,000 – if everything were done perfectly. He soon downgraded this to 60,000, more in keeping with a normal seasonal virus. But by then the top number was the one that everyone remembered.

In a normal situation, such dramatic and unscientific shifts in numbers would have made him suspect in the extreme, but in the heat of the moment, this was overlooked. He was the authority. He was in the news every night and he was the only source of daily information the US viewer had. People were understandably terrified by the numbers.

And in other countries, there were other experts like him, making essentially the same unscientific claims.

But before the downgrade was announced, the country had already been partially locked down – not enough to stop the spread, but enough to put more people out of work than any single event in history. Enough to collapse the economy within a month.

But regardless, the numbers of reported deaths are quite high. So, surely, this is not a normal virus – this is something very different, and very dangerous.

Except that the doctors who are actually dealing with the patients keep saying, “This is ridiculous. We’re getting enormous payments from Medicare if we write up a patient as having COVID-19. So, a large percentage of our patients and deaths are being listed as ‘presumptive cases,’ even if they’re not. It’s great for business, but it’s not medicine.”

Even early on, in Italy, seemingly every person who was already in hospital with an existing respiratory condition and had then died was written up as a coronavirus death. Throughout the system, the real numbers were dramatically inflated.

So what’s really going on here?

Well, Joseph Goebbels, in the Nazi quest for dramatically increased power, often said, “Make the lie big, keep it simple, keep saying it and eventually, they will believe it.”

So, if this is a lie, it’s a really big one. It would be the mother of all lies. And that’s just not possible. They wouldn’t do that. After all, we’re talking about human lives here.

Yes, but governments do that all the time, don’t they? There are countless examples in history of leaders, such as US President Bush announcing that Iraq unquestionably possessed “weapons of mass destruction” that posed an “imminent danger” to the US.

Later, when the claim proved to be utterly false, Americans were told, “Oh, never mind that, that’s not important. What matters is that we went over and shut ’em down.”

And so we nod and return to our daily lives, a bit uncertain as to our leaders’ motives and methods, but what’s done is done. The lie served the government in question well. The troublesome nation was squashed; then we all moved on.

Yes, but this is different. This is not young, healthy soldiers dying, this is old people and, even on occasion, children.

But then, in warfare, there’s nothing at all new about wiping out whole villages and bombing entire cities, in order to gain a strategic location, sometimes killing few if any actual enemy troops. That’s just normal warfare. Major collateral damage is expected.

Yes, but this is worldwide – the whole world has ended up following the initial lead. This isn’t some sort of tactical move by a New World Order; this has spread everywhere.

So how did this take hold?

Well, the media gave it only occasional mention when it was confined to China. It first became big, nightly news when it hit Italy, and we later learned that the media in Italy greatly exaggerated the evidence. Possibly it just got out of hand.

And then Spain did the same. So they did their lockdowns. Then it started quickly popping up elsewhere in Europe and most of the EU countries reacted in lockstep, all overstating the actual numbers and all demanding a lockdown to keep a new Spanish flu from occurring.

Almost immediately, North America got it and did the same. From there, it eventually arrived in the other countries in the world, and by now, everybody knew the drill. The only way to prevent deaths was to shut the economy down. Everybody followed the now-established lead, in knee-jerk fashion.

Of course, we do know that governments worldwide tend to live by the principle to “Never let a good crisis go to waste.” All of the governments of the countries in question had, in recent decades, taken on massive, unpayable debt. When the markets crashed and the bubble popped, the peoples of all those countries were going to be hopping mad, as they realized that their governments had expanded their own wealth and power at the expense of the populace, whose economic lives had just been washed away.

Then COVID-19 arrived on the scene… People were locked down and kept from working… The economic bubble popped… No one’s fault… It was an act of God… And we’re sorry, but the governments will now need to get even more powerful in order to take charge of the global economic crisis that has ensued.

And of course, we do all want to get back to normal; so, on the whole, it’s best to accept the wisdom of our leaders and get on with it.

Yet, we do have that niggling problem that more and more experienced doctors, who are not invited on the nightly news, are instead going online, saying, “This has been blown way out of proportion. Medicine is about science. What’s being claimed in this pandemic is not science. What we have here is a seasonal virus. And in fact, coronavirus is not new. It’s been in existence for a long time. There are treatments for it and they’re both plentiful and cheap. There’s no need for a miracle vaccine that’s years away from being available. We can deal with it now. None of what’s happening fits what we know about science and medicine. Something’s very wrong here.”

But even as that thought begins to sink in, we shake it off and say, No, no, this is different. This is global. If this were a global effort, okay. We understand that globalists exist and they have a very definite agenda to pull the world together into a New World Order. And even though globalists such as David Rockefeller have announced proudly that the New World Order is their objective, that’s all… an abstract. Yes, at some point, there would have to be a pin that would burst the bubble. There would have to be an international event that would get people frightened enough, globally, that they would go quietly into the New World Order.

But this is happening now. We can’t possibly be at the introductory point of this eventuality. That would mean that life as we know it is about to change dramatically. Everything that we thought was safe – everything we’ve worked for – is now uncertain.

And that simply can’t be.

Editor’s Note: Unfortunately, most people have no idea what really happens when a government goes out of control, let alone how to prepare…