Love It or Leave? 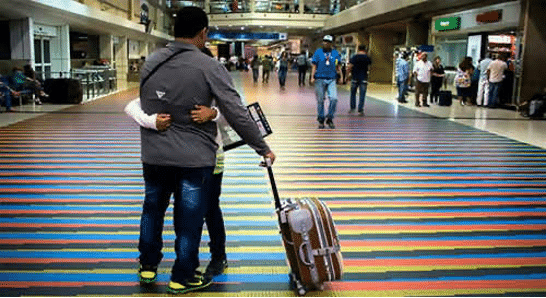 Countries that are in the decline stages tend to lose their best and brightest.

What happens is that, as a country becomes more socialistic, it attracts thousands of new residents who are seeking free stuff. They wish to cash in – to live off the state.

But someone has to pay for that free stuff. And of course, that means that the more productive people in the country are handed the tab.

As a country grows more socialistic, an ever-larger number of dependent people must be paid for by those who are productive. This, of course, diminishes the retained earnings of those who have been productive.

What happens then is that a quiet exodus begins to take place. The very people who are ordered to pay the bill for everyone else tend to look for greener pastures.

In most every case, the first inclination is to look for a better corner of the country in which to live. Generally, it’s a location – a state, a city, a town – where the taxes are less, the crime is lower and the level of freedom is greater.

After all, you don’t really want to leave your country; you just want to free yourself from the burdens your government is placing upon you.

Those who choose a partial exit – say to Florida, Texas, or even Puerto Rico – at some point discover that the government that had treated them as a cash cows, ready to be milked to pay for government’s increasing entitlements, does not wish to lose its herd of cows.

Sooner or later, the temporary relief of living in a location that’s a partial solution becomes a lesser relief. The trouble is: Once a government has been in the habit of treating its productive class as cash cows – and has put in place the laws that allow it to milk them – it rarely relinquishes its grip on them for long.

Essentially, this means that at some point, the light is switched on in the mind of a particular cow – the realisation that the ultimate objective is to get beyond the borders of governmental control.

I’ve found, over the years, that those who are planning an exit tend to do it quietly.

Well first, they realise that their move will not be popular and they don’t wish to be explaining themselves to others. Second, they want it to go smoothly and they’d rather slip away than have anyone try to get in their way.

Therefore, the early exiters tend not to be noticed. Their numbers are small in comparison to the numbers of incoming largesse-seekers.

So, what happens to those who are now becoming aware that their government is bleeding them dry? Since they tend not to be aware that others have exited before them, they’re likely to feel quite alone, which is a great deterrent to their own inclination to leave. Since they don’t know anyone else who’s made an exit, it’s understandable if they feel that leaving simply isn’t an option.

What, then, is the tendency in such people? How do they deal with the situation?

Well, for the most part, they tend to tolerate the injustice, even though further weight continues to be added to the millstone around their necks.

But they do say, “This isn’t fair. We’re not going to take much more of this.”

And the key here is in those last four words. For the great majority of those who are oppressed by an overreaching government, the trigger never quite gets pulled. Instead, with every new burden, they tend to say, “Not much more.”

And governments recognise that, as long as the burden is added gradually, most people are foolish enough to tolerate the increases endlessly.

As Desmond Tutu said, “If you are neutral in situations of injustice, you have chosen the side of the oppressor.”

Quite so. People can only be dominated if they accept domination.

The numbers that actually pull the trigger and leave are therefore quite low.

And in this there’s an advantage: Although thousands are now leaving the US every year and their numbers are growing, they are not at present in the millions or even in the hundreds of thousands.

It’s for this reason that those who choose to cease being milk cows may still make a fairly quiet exit.

At present, there’s an exit tax, but its threshold is relatively high. And although the government has begun to disallow travel offshore, those who are persistent can still find an opportunity to do so.

However, this possibility may cease in the near future.

As economic woes worsen in the US, more people will decide that they don’t wish to have their government lessen the ability to make a living and raise taxes to pay for the government’s loss in revenue.

Even now, the exit door is beginning to close, as the government realises that the trend has begun.

Unknown to most Americans, all of the restrictions needed to literally close the doors on the departure of both wealth and people have been passed into law, primarily under the USA PATRIOT Act of 2001 and the National Defense Authorization Act of 2011.

These restrictions are not yet implemented. They’re intended to be implemented automatically, should a president declare a national state of emergency for any reason.

If, for example, an economic crisis were to unfold, as it’s presently doing, it’s likely that a state of emergency would be declared.

Similarly, if civil unrest were to escalate for any reason, it’s likely that, at some point, a state of emergency would be declared.

Therefore, for any milk cow who is considering an exit to greener pastures, the window of opportunity may well close relatively soon.

Those who may love their country, but do not love what it’s become, may choose to leave the herd whilst greener pastures remain an option.

Editor’s Note: The prospect of a disputed US presidential election amid the global pandemic is not only a possible scenario but a likely one.

It could lead to enormous and unprecedented effects, such as mass unrest in American cities, stock market convulsions, a dollar collapse, and much more.

URGENT VIDEO: The Day After—How to Prepare for What’s Coming After the 2020 Election

For the first time, legendary investor Doug Casey is joining the world’s top economists, geopolitical analysts, investors, military experts, historians, and Washington, DC insiders to bring you actionable information on what comes next, including what you can do right now to prepare.