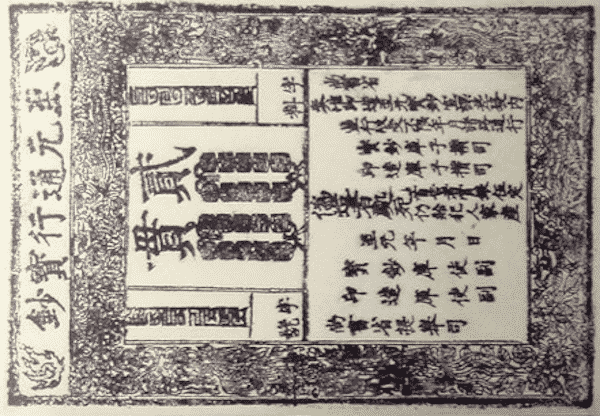 In 1260, Kublai Khan created the first unified fiat currency. The jiaochao was made from the inner layer of bark of the mulberry tree. It’s of interest that the mulberry tree was quite common in Mongolia. What allowed Kublai Khan to get away with treating tree bark as currency was that each bill was cut to size and signed by a variety of officials. They affixed their seals to each bill. To further ensure authenticity, forgery of the chao was made punishable by death.

But even then, why would people accept bark as being of the same value as gold and silver, which had successfully served as “money” for thousands of years? Well, to begin with, the chao was redeemable in silver or gold. But just to make sure it was accepted, Kublai decreed that refusing to accept it as payment was also punishable by death.

Today, we’re more sophisticated. Governments no longer threaten to kill people for refusing to use a fiat currency; they just make it extremely difficult to deal in anything but fiat currency.

At the time, Kublai was involved in an ongoing war with the Song. The war had drained the treasury and Kublai was finding it difficult to continue to finance the war. And so, in 1273, he issued a new series of the currency without having increased the gold and silver in the treasury.

In 1287, Kublai’s minister, Sangha, created a second fiat currency, the Zhiyuan chao, to bail out the previous one, to deal with the budget shortfall. It was non-convertible and was denominated in copper cash.

There’s an old saying that, if you find yourself in a hole, the first thing to do is stop digging. Yet, throughout history, leaders, having created a Ponzi scheme of fiat currency and finding out that it has its pitfalls, invariably keep digging ever faster.

In Kublai’s case, as in so many other cases in subsequent history, inflation of the chao led to economic disaster. The chao became an utter failure.

Marco Polo visited Asia just in time to see the initial success of the chao. Upon his return to Venice, he informed Europe of the concept of fiat currency. Although he had been in Asia long enough to see the collapse of the currency, Europe took to the idea of fiat currency like ducks to water, and fiat currency has been used in the Western world ever since.

Not surprisingly, European fiat currencies experienced the same outcome as the chao. Over time, every fiat currency ever created has failed and always for the same reason: Governments become overextended (generally due to warfare), excessive printing is implemented to bail the government out, and the resultant inflation collapses the currency.

Fast-forward to the US in 1971. President Richard Nixon had a problem. The treasury was being drained of gold by trading partners such as France. The US was waging war in Vietnam, which was also draining the treasury. Mr. Nixon’s Treasury secretary, John Connolly, with support from other presidential advisors, recommended that the president dig the hole deeper, by going off the gold standard and printing dollars.

It’s unlikely that Mister Nixon was aware that he was making exactly the same mistake Kublai had made, seven hundred years previously, and that he was doing so for the exact same reasons, and based upon the same recommendations from his advisors.

However, the US, at that time the greatest creditor nation in history, stepped off the economic cliff.

And yet, that occurred almost fifty years ago. In the past, fiat currency collapse has generally been far swifter. Why has the dollar been in suspended animation for so long?

Well, for that, we look once again at real money: gold and silver.

The US had joined both world wars late. In the early years, the US became the suppliers of munitions, equipment and vehicles for the two wars. And more to the point, they insisted on being paid in gold.

(It should be noted here that, as often as the US government and the Federal Reserve have tried to argue to Americans that gold is not really money, during wartime, the US would accept nothing else in payment for goods shipped to other countries.)

By the end of the two world wars, the US held the lion’s share of the world’s gold in its vaults and therefore could dictate to the post-war world what the economic standards would be.

They came up, first, with the concept that the world would use the dollar as the default currency and, later, that it would be the petro-dollar – the currency to be used for the settlement of all oil-related transactions.

This put the US on a unique pedestal. After 1971, the US could print all the dollars it wanted and the world would just have to accept it. This, in turn, created a bubble of debt such as the world has never seen. The US became the world’s greatest debtor nation.

But along the way, weaknesses began to appear in the bubble. Oil producers such as Iraq and Libya announced that they would begin dealing in currencies other than the dollar. The US reacted swiftly, killing their leaders and destroying their governments.

Soon, Iran made the same decision and, this time, it was supported by India, China, Russia and even the EU. Additionally, both China and the EU created their own international payments systems (CIPS and INSTEX, respectively), bypassing the dollar.

Further, nations began dumping US treasuries back into the US system.

At present, the dollar is stable but has a critical illness. And it has occurred at a time when the US has been at war in the Middle East for nearly two decades and is pouring billions each year into that effort. It is also spoiling for war in Iran, which undoubtedly will result in Iran being supported by China, Russia and possibly the EU. The Federal Reserve has stated publicly since 2004 that if deflation occurs, it will print as much money as it takes to “solve” the problem – a commitment to massive inflation.

And so, history repeats. On this occasion, it’s taken longer to play out, as the dollar has had such a great advantage over other fiat currencies. But we’re fast approaching the point at which the dollar, like so much mulberry bark, becomes worthless, as have so many fiat currencies before it.

When this occurs, we shall discover what Kublai Khan discovered in the thirteenth century – that when fiat currencies fail, the world once again returns to real money: silver and gold.

Those in our own era who recognize this may choose to prepare themselves by converting their endangered currency into real money.

Editor’s Note: It’s clear the Fed’s money printing is about to go into overdrive. The Fed has already pumped enormous distortions into the economy and inflated an “everything bubble.” The next round of money printing is likely to bring the situation to a breaking point.

Its clear that the world is facing a severe crisis on multiple fronts.

Gold is just about the only place to be. Gold tends to do well during periods of turmoil—for both wealth preservation and speculative gains.

That’s precisely why we just released an urgent video. It reveals how it will all play out and what you can do about it. Click here to watch it now.