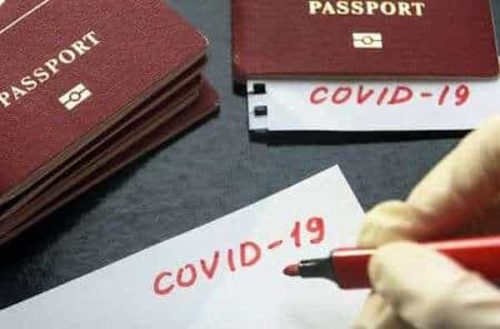 The UK plans to roll out “immunity passports” to allow people to return to work and socialise. This concept is being promoted as a means by which those who have been vaccinated against the coronavirus may be allowed to return to normal life.

In Germany, where the concept is also being advanced, Gerard Krause, the epidemiologist leading the Helmholtz Centre for Infection Research, states, “Those who are immune could be issued with a kind of vaccination pass that would, for example, allow them to be exempted from restrictions on their activity.”

Italian politicians are also discussing whether to issue COVID passes to the public.

After all, we’d all like to be able to return to normal life: to be allowed by our governments to make a living and to function socially. If an immunity passport could make it possible for that to happen sooner, surely that would be a good thing.

So, just how would this be handled? Well, the San Francisco publication WIRED offers this explanation:

“The standard for this certification should be set at a national level and updated continually.

Certification of individuals should be done by all capable and available agencies at county, state, and federal levels, and then recorded in a common online registry.

This project entails the creation of different classes of people with different privileges.”

So, essentially, all those seeking to regain the freedom that they enjoyed prior to the onset of the coronavirus would need to get the appropriate vaccination, and they would then receive a “passport” of sorts that states what level of freedom they would be allowed to have in the future.

Of course, we tend to think of a passport as a document that allows us to travel abroad. And, in fact, that’s another feature of immunity passports.

Bill Gates has chimed in, saying, “What we’ll have to have is certificates of who’s a recovered person – who’s a vaccinated person, because you don’t want people moving around the world where you’ll have some countries that won’t have it under control.”

And as with any new idea, there will be the naysayers. There will be those who, suspicious of the underlying motives of the new “allotted freedom,” will chafe at their loss of presumed liberty.

However, it’s unlikely that the majority of people would have sympathy for those who would put all humanity at risk by rocking the boat. After all, no one wanted the coronavirus, but now that it exists, we all have to recognise that it would be dangerously selfish for anyone to move freely without an immunity passport, thereby putting others at risk of infection.

And those people could easily be dealt with: Those who do not possess an immunity passport must remain in lockdown – either at home or in a central facility, if necessary.

Mister Gates has further stated that we failed to take heed of his warnings of a global virus some five years ago, and we are now paying the price. But he has said that what we are learning from the pandemic now will set the stage for the future – that, should there be future viruses, they’ll be quite a bit easier to address through protective measures that we put in place now.

He has not been specific as to what he thinks that will entail, but it would seem logical that all those who have been issued immunity passports would need a booster shot each year to assure that, as each new flu season arrives (and with it the latest mutation of the virus), a new vaccination would be required for these individuals to be allowed to keep their freedom.

As yet, the term “immunity passport” is unknown to most people, and yet, throughout the former Free World, those who are in powerful positions are well along in planning its introduction. Although we are still in the midst of the pandemic, these countries seem to have either all gotten the same idea at the same time, or the concept has been in the works for a while and has only been waiting for a suitable crisis to bring it forward.

And, to be sure, the immunity passport does fit perfectly into an observation that several of America’s founding fathers discussed—a choice between safety and liberty. As Benjamin Franklin stated,

“Those who would give up essential liberty, to purchase a little safety, deserve neither and will lose both.”

To those who place a high value on liberty, “licensed liberty” may sound like an oxymoron, and certainly, this would be a first for the US and the UK. But to be accurate, it’s not the first time around for either Germany or Italy. In World War II, both countries licensed freedom and, in fact, “different classes of people with different privileges,” as stated above, was the norm under the fascist regimes.

And there can be no question that the average person doesn’t really want to spend a lot of time thinking about the situation. He simply wants to return to work and have the freedom to crowd into Starbucks each day for his coffee, without concerning himself with social distancing.

For those few who draw a line in the sand regarding basic entitlement to personal liberty, licensed liberty may be unacceptable. They may believe that any country where immunity passports are being planned are no longer places in which they would invest their future and may choose to consider the countries where this is not presently part of the plan.

“My country is wherever liberty lives.”

Liberty still lives in the world to a greater degree than in those countries pursuing immunity passports.

It is left to the reader to decide whether they should accept the loss of freedom that they may now face or whether it may be preferable to vote with their feet, seeking a destination where liberty lives.