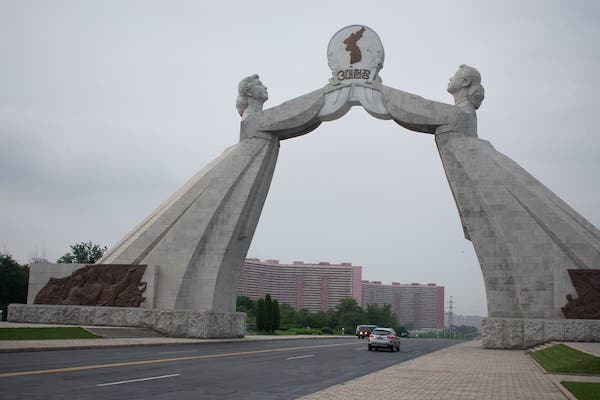 The image above is of the Arch of Reunification in North Korea, located just south of Pyongyang. It was constructed in 2001 and features two women wearing traditional chosŏn-ot dresses, representing the two Koreas coming together.

The arch spans the highway that connects North and South Korea, except that, as can be seen… there are no vehicles on that highway.

So, why build a highway that doesn’t have a use?

Well, since the time of Kim Il Sung, there have been discussions to reunify the two Koreas.

To the Western mind, there would be two immediate questions: “Why do they want to reunify?” And, “What’s stopping them?”

To answer the first question, it’s an ideal opportunity, as each has something to offer the other.

Westerners will know that the South is a highly modernised nation with a rapidly growing manufacturing capability. It has all the necessary expertise and infrastructure in place to convert North Korea into a manufacturing nation.

But why would the Kim dynasty desire this? Don’t they have all they need? They have total dictatorship over a very subservient population. What’s to gain?

Well, the last two generations of Kim leaders have been North Korean. But Kim Jong-un was educated in Switzerland. In spite of his Maoist outfits and haircut, in many regards, Mister Kim is decidedly European. Certainly, he enjoys many luxuries that are western.

But beyond the walls and fences of his Ryongsong Residence, there are only minefields and military stations. Beyond that, there’s mostly agrarian poverty.

Reunification with the South would provide the Kim family not only with dramatically increased wealth but make them a more powerful force in northern Asia.

As for South Korea, the benefit to reunification is, if anything, more desirable.

For decades, South Korea has been expanding its manufacturing capacity, and the thirty-year Japanese economic quagmire has allowed South Koreans to rise up dramatically against their traditional arch-rival.

But they have a problem. All of the goods manufactured in South Korea must be loaded into shipping containers, placed on freighters and shipped around the world. The South Korean dream would be that, if they could lower their shipping costs through rail shipment, everything they sold would drop in price and they’d be in for the greatest boom of prosperity they’d ever seen.

If they could only cross the border into North Korea with freight trains, it would open up new opportunities to ship to Asia and Europe.

And that leads us to the second question: “What’s stopping them?”

Well, as much as Mister Kim may desire the increased wealth, he has the same problem that plagued East Germany prior to the German reunification: If the borders opened, millions of poor nongmin – peasants – would flood south, in search of immediate improvements in their living condition. Mister Kim, understandably, wants them to remain under his personal thumb.

To many in the West, this translates into, “It’ll never happen,” but there’s another possibility that’s not being discussed in the West. Here in Korea, it’s a very real possibility.

This is not exactly a topic that you’d hear in Korean coffee shops each morning, but it’s one that business leaders here are discussing quietly: The reunification can be done in stages.

For the sake of the older Korean people, who wish to reunite with their families, the official goal would be full reunification, tentatively slated for a distant 2045.

But the two Koreas could, in the meantime, institute a trade agreement in which North Korea gains access to South Korean investment capital, expertise and infrastructure, and the South gains a railway and a highway through North Korea to the rest of Asia.

And it’s at this point that the image above becomes significant. Although, at present, we can stand in the middle of this highway leading from Pyongyang to the Demilitarised Zone (DMZ), seeing only the occasional vehicle, it’s clear that this highway does have a purpose. It just hasn’t yet been used.

Also at the DMZ, the fences, guards and even the little aqua-painted buildings that Westerners have seen in videos of Mister Kim and President Trump on their historic border meeting are indeed still in place.

But what’s not often seen is the Dorasan railway station. It’s a large, modern railway station with all the kiosks, ticket booths and schedule boards in place, but has been all but unused since its completion in 2014.

A sign reads, “This is not the last station from the South, but the first station toward the North.”

Much of the DMZ is still a minefield, where most of the two million mines placed there in the 1950s are still present.

However, beyond the minefields, we can see development. Some of this development is residential and office buildings, but quite a bit of it is in pre-engineered steel buildings, ideal for manufacture and storage.

This is occurring on both sides, although the South have been more industrious to date.

It’s entirely possible that the two Koreas could agree to reunify, but to retain autonomous governments in Pyongyang and Seoul.

But the immediate opportunity exists for a simple trade agreement, with migration controls. This could happen far more quickly, within the near future.

Here, on the ground in Korea, it’s quite clear that a significant amount of capital is being spent toward this eventuality.

But for the armchair observer in the West, is this really of any importance? Might he not be justified in simply saying, “So what? Why do I care?”

Well, it’s been said that the 21st century will be the Asian century. Westerners are certainly aware of the present struggle between the US and China, but regardless of sanctions on China, Asia as a whole is advancing dramatically. Even if China were to shut down entirely as a supplier of goods to the world, the other Asian manufacturing companies would have replaced the volume of goods in as little as five years.

Here in Asia, that is manifestly evident, and indeed, it’s something that the people of Asia take as a given.

This is indeed an eventuality that every Westerner should understand, as it will dramatically affect his economic future.

Editor’s Note: It’s clear the rivalry between the US and China is getting intense. The trend of increasing tensions shows no signs of slowing down. It could all be coming to a head soon… and that will have enormous economic and political consequences.

That’s exactly why New York Times best-selling author Doug Casey just released an urgent new video Doug Casey’s Top 3 Secrets to Survive and Thrive During a Dollar Crisis. It explains what’s to come and exactly what you should do to protect yourself. Click here to watch it now.