Is There Hope for the US? 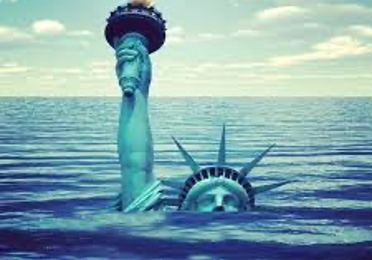 For the entire lives of anyone under the age of seventy-five, the US has been at the top of the heap in almost every way. For decades, it had greater freedom, greater prosperity and higher production than any other country in the world.

America was a cornucopia – the centre for innovation and trends in technology, the arts and social development. And today, many Americans, even if they complain about changes for the worse in their country, come back quickly to say, “This is still the greatest country in the world.” Or, “Everybody is still trying to come here.”

Well, truth be told, neither of these knee-jerk comments is accurate any longer. But even those who have come to that realisation tend to resort to the inevitable fall-back comment: “Well, whattaya gonna do? It’s just as bad everyplace else.”

And yet, this is also inaccurate. Throughout the history of the world, whenever a country had entered its decline stage, others were in the process of rising up.

In fact, this is the one characteristic of America that’s most rapidly in decline. This is especially true in 2020, when a virus has been used as a justification to dramatically increase governmental dominance of the populace.

It matters little whether the US had a hand in creating the virus, or whether it was merely co-opted as an opportunity to expand control.

The result has been heavy-handed governmental meddling in medicine, business and personal freedoms.

As regards the latter concern, the odd halfway measure of personal movement control is not great enough to keep a virus from spreading, but it has been sufficient to collapse businesses, create record unemployment and make it impossible for some people to feed themselves.

In the bargain, it has served as an ideal cover story for an economic collapse that had been inevitable. The government can say, “Don’t blame us for the collapse; it was those naughty Chinese and their pesky virus that did it.”

The decline is not an accident. It’s a planned demolition. And it’s going well. For those who actually pull the strings, profit will be made from the unfolding crisis. Not for everyone, of course, but most certainly for those few who are creating it.

But many say that the US is waking up, that its citizenry are coming to the conclusion that the Deep State – that corporatist ruling class that are made up of governmental and big-business leaders – has increasingly destroyed the prosperity, production and liberty that once existed and replaced them with massive debt, an exit of production to other countries and a vanishing middle class.

And they’d be entirely correct. The endgame for the once-great US Empire is now underway, and over the next few years, we shall bear witness as it tumbles downhill.

So, what are Americans to do?

Well, my belief is that – as is always the case when a country declines – the populace will divide into several groups.

The first group, which will be by far the largest, will increasingly grumble, but ultimately do little or nothing to save themselves. They will go down with the ship.

The second group will say, “We don’t have to accept this.” They’re the preppers, the ones who have a store of food and have been stashing away guns and ammunition. They’re the folks who are seen at the corner bar, saying, “If they come for me, I’m locked and loaded.”

Their friends nod in agreement, but in fact, if a trained and outfitted SWAT team were to arrive on their porch, there would be very few who would succeed in getting off a single shot, and for those who did, their remaining life would be brief.

On the more thoughtful side of this group would be the third group. They would also say, “We don’t have to accept this,” but their choice of a solution will be to “work within the system.”

This is a much larger group – the ones who wait for each election as though it holds a solution. Each time, they’re disappointed. If the party they supported is elected, the winners somehow fail to return the country to the free society it had once been. If the other party is elected, the decline only accelerates.

Incredibly, the lightbulb never seems to go on for this group. They never get to the point of realisation that, “Oh, I get it: neither party has any intention of returning the country to a state of liberty. The only question is which group of pretenders gets to be in charge of the decline this time around. Either way, I lose.”

It could be said that this is the most tragic group. They’re sincere and dedicated. They endlessly hope that a solution is just around the corner, without there being any actual substance for their hope.

The commonality in all three of these groups is that they all end up as casualties. They may differ in their approach to the decline, but they’ll share in the loss of their wealth (however large or small) and their liberty.

But there’s also a fourth group – those who leave. Their numbers are small and they tend not to make a large impact on the consciousness of the other three. In fact, they’re never even mentioned by the media. It’s as though they don’t exist.

So, let’s step back a few centuries. America was founded by a hardworking assortment of settlers who came from several countries in Europe. In their home countries they witnessed oppression – limitations to both their liberty and their ability to create a good life for themselves and their families.

They were independent-minded and self-reliant. They carved out lives in the wilderness and later built towns, then cities. But all the while, they hung on to their core belief of independence and liberty.

Today, they’re still revered as being the backbone of what made America great. And this view is accurate. Yet, today’s Americans are nothing like them. None of the three groups above thinks like them, although the middle group would like to believe they do, merely by owning guns. They’re not independent-minded. They’re not self-reliant.

The key here is that the founders of America recognised that there was no chance that they could change the corrupt and controlling systems they were born into in Europe.

So they left Europe and started over elsewhere.

The fourth group are following a similar path: Seek out a destination where the government does not yet have the power to rob you of your wealth and freedoms.

The choice is a simple one. If you value your liberty – the ability to make your own decisions and to keep more of what you’ve earned – pack your bags and go.