Is Silver on the Brink of a Major Move?

There is well-known strategy used in cycling to win races.

Cyclists ride in a peloton formation to conserve energy by drafting behind lead riders.

The cyclists take turns being in the front and using most of the energy. For the riders behind the leader, this results in a reduction in air resistance – drag.

In a race where winners and losers are separated by seconds, this strategy can reduce drag by 5-10%.

Stretch that reduction over hundreds of miles and the amount of energy saved adds up – in a big way. This allows riders to sprint to the front with more energy.

Right now, it feels very much like gold is leading the precious metals pack at the front of the peloton.

Could silver be conserving its energy looking to make a sprint to the front of the pack?

Silver (or ‘Argentum’ in Latin) has been a prized metal since antiquity.

Though too brittle to forge swords or armor, its luster and rarity made it a prized medium of exchange.

Powerful empires like Ancient Rome to Imperial Spain couldn’t mine enough of it.

Silver coins became the unit of account in many important currencies: the Greek Drachma; the Roman Denarius, the Islamic Dirham and the Spanish dólar.

It was the Spanish dólar, with its standardized dimensions, that inspired Treasury Secretary Alexander Hamilton to adopt the US Dollar as the currency of the newly-founded United States of America.

Now, Silver has one thing that gold does not – affordability and abundance.

Over 60% of silver is used in industrial applications, with the residual sub 40% used in jewelry and silver bullion. There’s certainly an argument to be made that silver is a base metal that likes to pretend that it’s still precious.

One of the most important things to understand about any commodity is its supply and demand fundamentals.

Silver production has been impacted severely by COVID-19.

A second round of lockdowns would be good for the price of the silver, at least on the supply side. It’s bad news for miners who have to shut in or curb production.

What Are the Largest Silver Producing Countries?

And let’s not forget Guatemala will become a major producer once my buddy Ross Beaty starts up the Escobal silver mine. It truly is one of the world’s most attractive primary silver mines.

Many of those countries are facing a resurgence of the Coronavirus.

All these countries have eventually classified mining as an essential service. But, a serious outbreak on a mine site could result in closures.

Below is a chart showing the estimated global silver production for this year. 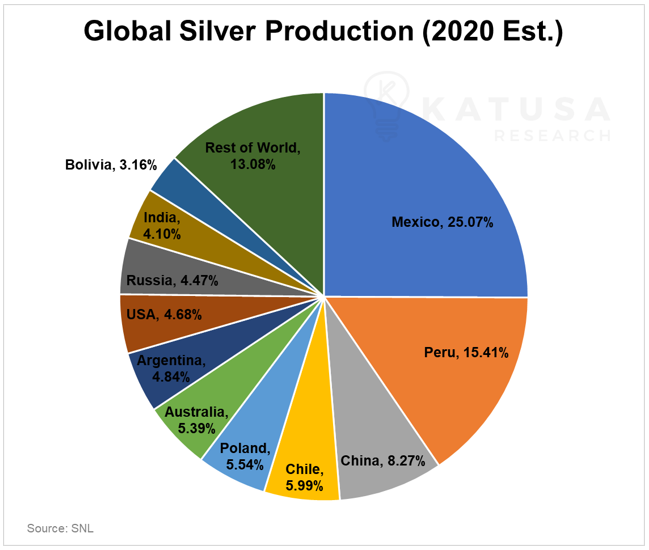 Note that these production estimates were made pre-COVID-19.

In fact, many of the largest silver miners, including Fresnillo, Buenaventura and Pan American Silver have withdrawn their production guidance for 2020.

Normally, production deficits are beneficial for prices. However, the fact that 75% of silver’s demand is used for industrial and commercial purposes is likely crippling its safe haven demand.

This is one of the reasons why silver hasn’t been performing as well as gold or US Treasuries to date.

But there’s another reason why most portfolio managers won’t put ‘silver’ in the same category as US Treasuries, Japanese Govt Bonds, US Dollars and Gold…

That’s because, it’s simply too volatile to act as a hedge.

For this, we can instead look at the magnitude of daily price changes (positive and negative) for both assets.

In the next chart, you can see the volatility of silver prices. Over the last 10 years, it had much higher daily percentage gains and losses than gold did. 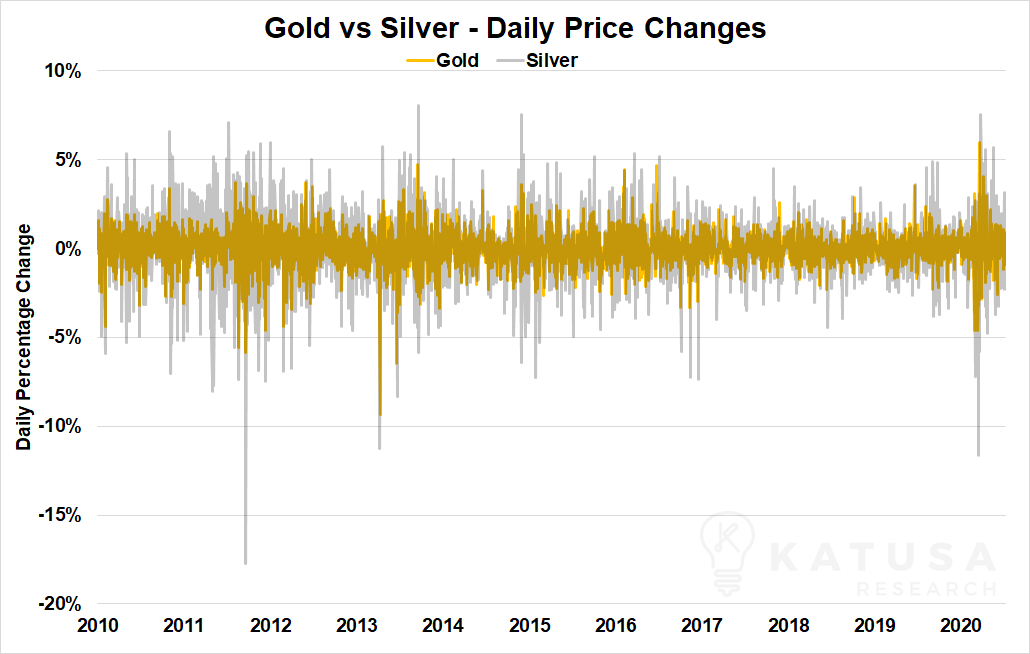 In short, the answer is no. Sorry Silver Bugs.

Also, the value of reserves per square foot in the vault is vastly inefficient when compared to gold.

Up to 47% of annual gold demand is for investments – including central bank foreign exchange reserves.

Gold prices are primarily determined by its demand as an investment (store of value).

On the other hand, silver prices are as much determined by industrial and commercial users than by investors.

It’s also worth noting that the investment market for silver is substantially smaller than gold’s. In 2019, ~$4.3B worth of silver produced went to investments in physical products or ETFs. This figure was $62.7B for gold. 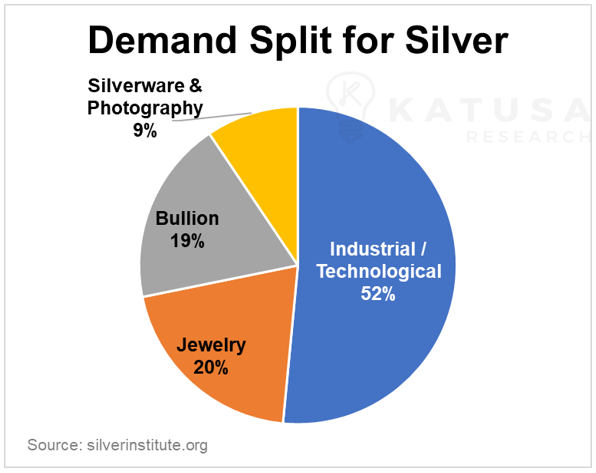 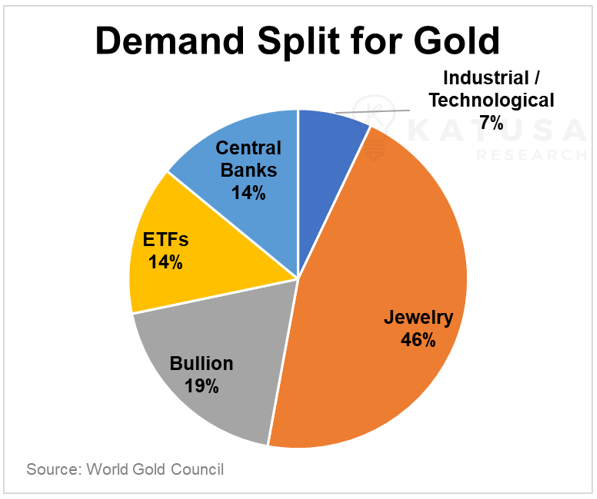 Looking at the historical data, it’s clear that silver peaks before gold.

And true to its volatile nature, it does so far more dramatically.

The spread between gold and silver prices is widening to levels not seen in 50 years of data.

If ever there were a time for history to play catch-up, then now’s the time. 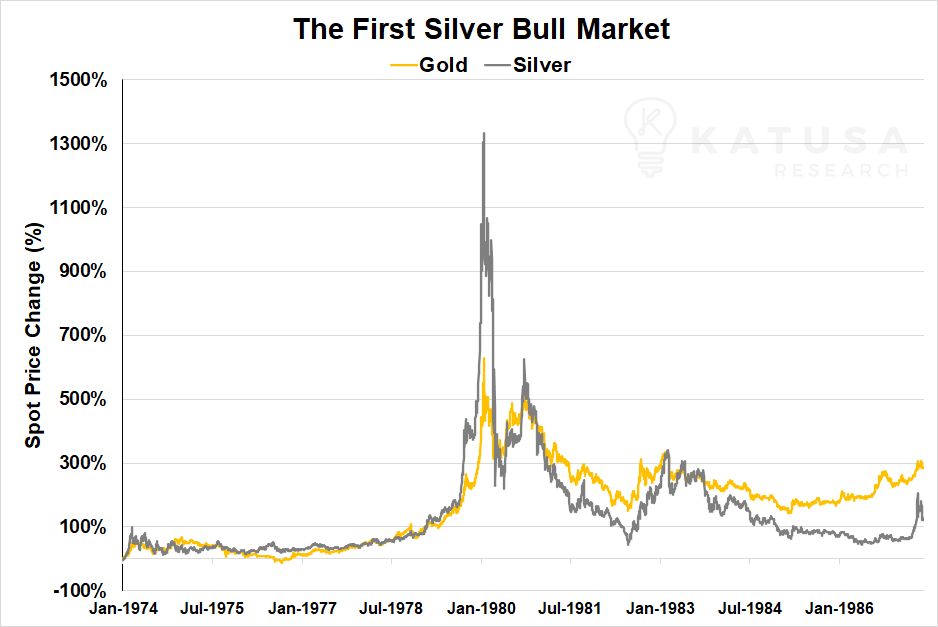 From November 2010 to April 2013, the second bull market for silver was not as impressive as the first. Silver didn’t reach quadruple digit percentage gains, yet it still pulled ahead of gold significantly.

This means that silver has a lot more room to move up to its record highs.

A Look at Silver’s Technicals

The biggest key to look out for is the psychological $20 resistance level.

If the price of silver breaks out above that $20 price, then every trader and algo will start to take note.

(Editor’s Note: Recently, the price of silver soared past $22.) 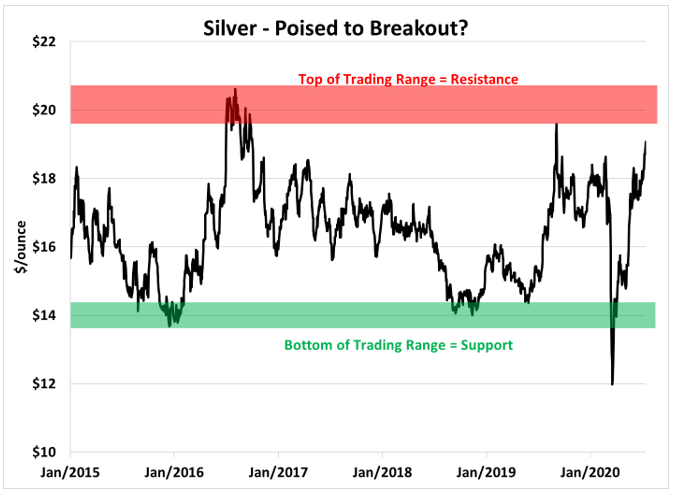 Below is a long-term chart which shows how compressed silver has been. A consolidation in the $20 per ounce range, could provide a base for a major slingshot move upwards. 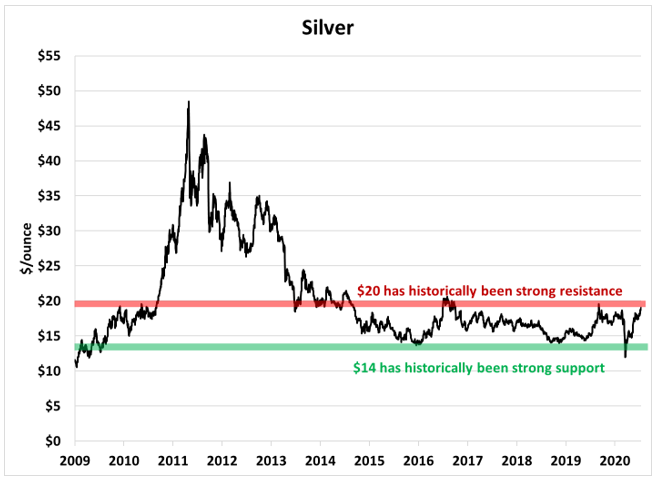 In the next chart, you’ll see that non-commercial long positions increased by over 35,000 contracts in the past 6 weeks.

Non-Commercial positions is a term used by the CFTC to classify speculative futures and options trades.

Spec traders holding long positions in silver futures are betting that the price of the silver will increase in the future.

The chart below indicates an increasingly positive trader sentiment. It would not surprise me to see silver rally like it did in 2011. 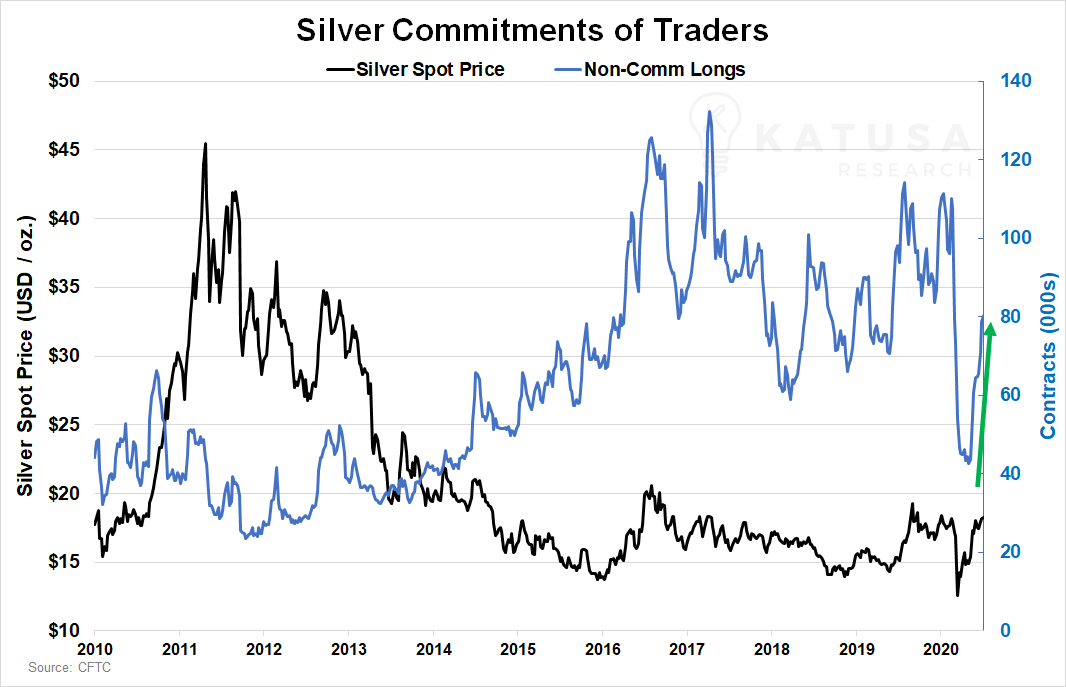 ETFs like the iShares Silver Trust attempt to track the price of silver at a ratio of one unit per ounce of silver.

Commodity-based ETFs are not as simple as you might think. These funds are traded on an exchange, separately from spot and futures markets.

For an ETF to track the price of silver, the fund and its market makers must issue or redeem blocks of shares in exchange for bullion. By necessity, the funds are open-ended.

When an ETF adds silver bullion, it is typically doing so in anticipation of having to issue additional blocks of shares to keep up with market demand.

This is so that its unit (share) price doesn’t exceed the price of silver.

The fact that silver ETFs have posted net inflows for six straight months is a very bullish sign. 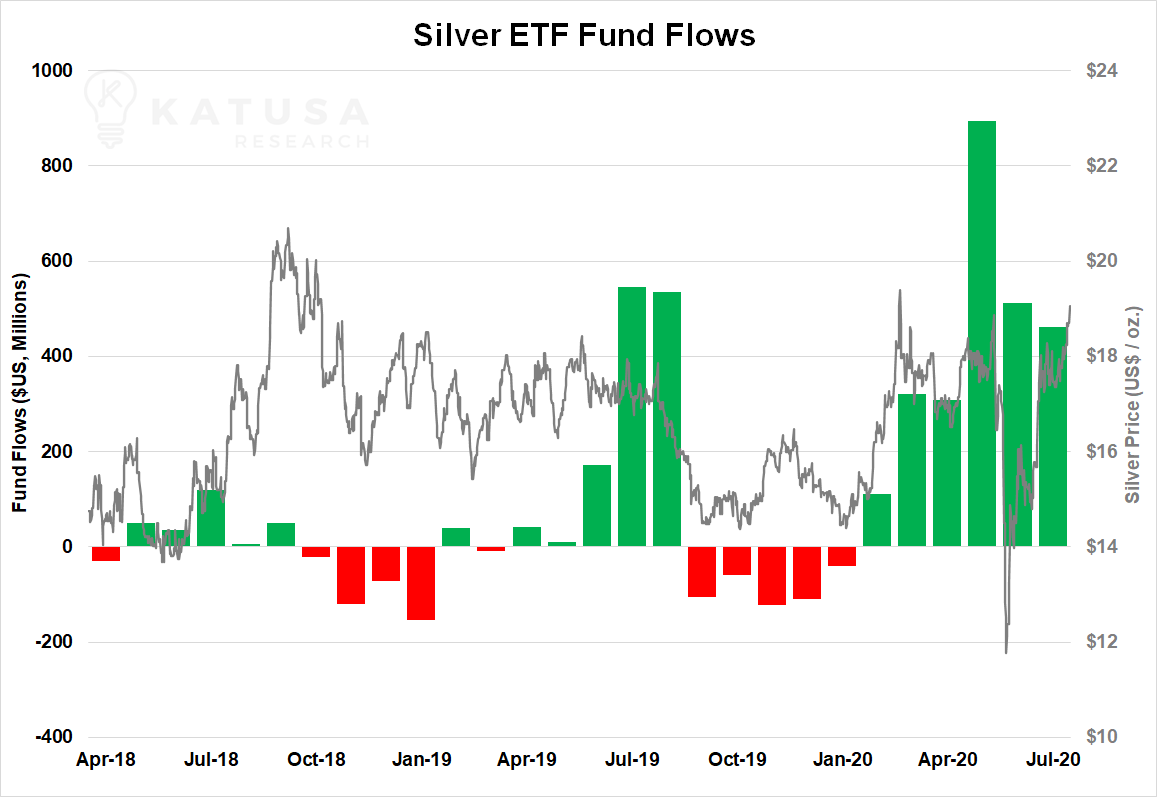 How to Invest in Silver

You can invest in silver bullion or silver ETFs, and if it takes off, perhaps you could double your money. But I think the best way to get exposure to a silver slingshot move is through the miners.

When the price of silver rises, the Net Asset Value (NAV) of many producers can soar dramatically.

Share prices are determined by a company’s NAV. As the NAV appreciates, the share price is likely to rise as well.

As central banks and governments around the world continuously pour money into their economies, stores of value and beneficiary industries can deliver major portfolio gains.

Marin shares how he is positioned and how you could join him as the bull market kicks off in earnest. Click here to see it now.