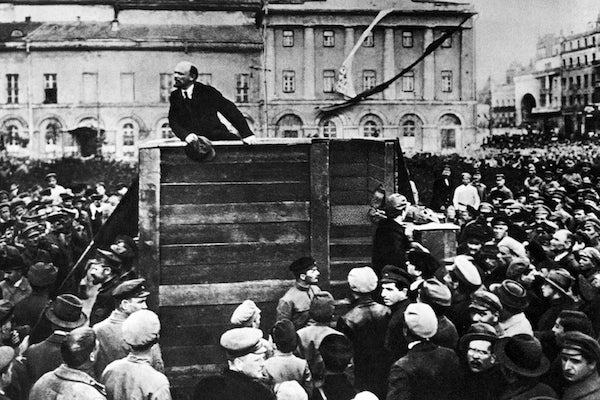 In any country, during prosperous times, the great majority of people go to work each day with the understanding that productivity results in an improved life. Even for those of humble means, the existence of prosperity around them is a daily assurance that, if you work hard and/or work smart, your life will steadily improve.

This is the normal state of affairs and has existed since time immemorial. Whether progress is quick or slow in a given location, the principle remains the same. A general condition of prosperity is a continual reminder of the value of a strong work ethic.

In a collectivist country, however, this is missing. The leaders live quite well, but they’re small in number and, for the most part, are outside of the view of the proletariat. What the common man sees around him is uniform poverty. No one in his midst is visibly progressing, so there’s no one to be jealous of.

This breeds complacency and so it’s not surprising that collectivism may be tolerated by the populace for many decades, even generations. People are invariably worse off under collectivism, but collectivism rarely ends due to rebellion. It ends because it’s a dysfunctional non-productive system that eventually collapses under its own weight.

But, if that’s so – if people living in a free-market system will instinctively reject collectivism and those living under a collectivist system also rarely rebel – how is it possible that, periodically, revolutions occur?

Why might the people of, say, the US, have been staunch supporters of a free-market system half a century ago and now be demonstrating a dramatically increased belief in collectivism? How is it even possible that political candidates with no experience in either politics or leadership positions be elected to Congress by promising collectivism?

Well that’s occurring for the same reason that it has occurred throughout history. The US no longer lives under a free-market system. Roughly one hundred years ago, the free market began to be replaced with corporatism. As corporatism increasingly bled the populace, the opportunity for personal prosperity declined. Over time, the average person was seeing less and less evidence of prosperity around him. At this point, he’s viewing corporate leaders enjoying unimaginable wealth, whilst those around him are experiencing stagnation. Real wages have not increased in decades.

Historically, it’s at this point that a people are ripe for the empty promises of collectivism.

And collectivists happily provide it. Although they occasionally promise to raise the proletariat up to the level of their economic betters, for the most part, they focus on the promise that they’ll bring the aristocracy down.

The selling of the idea of collectivism is based upon envy and resentment toward those who are better off than we may be. Collectivist leaders invariably accuse anyone who has prospered as being “greedy” and having “starved the poor” in order to achieve their relative wealth.

Although this is rarely accurate, it’s a great sales pitch, as those who have learned that their lives are not progressing are actively seeking an explanation and are ripe for one that blames those who have progressed.

The key here is that collectivism almost never sells well in a country where prosperity exists. In a free-market country, a strong work ethic is regularly rewarded. However, once the free market has deteriorated enough that the proletariat have come to understand that they’re not genuinely moving forward, they’re ready to jump on board with those leaders who appeal to their frustration and anger.

At this point, logic and reason cease to be important. What matters is rhetoric.

Once a people have concluded that prosperity is not truly in their future, they must choose between hopelessness and empty promises.

This is an important point, because human nature will always dictate that they choose empty promises. Left with no real hope, false hope is infinitely preferable to no hope.

Collectivism in the US began in the 1930s and was expanding nicely, when it was interrupted by World War II. The productivity of creating the goods of war for the European Allies sent the US into a period of dramatic productivity. This continued after the war, but in the 1960s, the effort to increase government’s control of production was renewed until, today, the wet blanket of government has become so heavy that prosperity has been minimized and the US is in a condition of stagnation.

And so, Americans are ripe for empty promises, and the younger the American (i.e., the less memory he has of the former prosperity), the more believable the empty promises seem to be.

Young Americans today are disinclined to daydream about a home with a white picket fence, a single wage earner, and a wife at home with three well-adjusted children. That dream sold well to their grandparents, but their grandparents witnessed people all around them achieving that dream, so it was clearly attainable if they were prepared to work for it.

Today’s young American sees this as hopeless. He’d like to be a billionaire like Jeff Bezos, but that clearly isn’t going to happen. So, he might as well not try.

His country has entered into eternal warfare, the government is broke, and he can’t even open a lemonade stand without applying for government permits and inspections.

At this point, it’s very unlikely that 1950s-style rhetoric of “Make America Great Again” will have any appeal to him whatever.

What is appealing is the promise that even if he makes no effort whatever, even if he remains in his parents’ basement for the rest of his life, unemployed, there’s a new political movement out there that understands him.

And it’s a breath of fresh air. It promises a life free from worry and effort. A free healthcare system, free college for as long as he wishes to be enrolled, and most importantly, a guaranteed living wage without the need to earn it.

In addition, instead of feeling worthless, his belief in the new collectivism gives him the ability to “stand for something.” He may now see himself as “making a difference.”

Only five years ago, Americans would have said that this would not have been possible. Leftist crackpots have always existed, but no one took them seriously. Surely, this would never come to pass in the US.

But recently, that’s been changing. Some candidates who have received the greatest support have been those who offer absurdly empty collectivist promises, and the media (whether they endorse them or not) are shining a spotlight on them every day.

The rhetoric has been classical collectivist propaganda. As impossible as it might be to actually work, it does absolutely appeal. It’s therefore spreading rapidly. I term this rhetoric, “infectious insanity” – a harsh term but, I think, an apt one.

In my belief, this will spread much as Bolshevism did after 1917, like a particularly virulent skin rash.

Historically, it’s always been true that, when prosperity has ceased to be readily visible in a nation, the false hope of collectivism becomes the drug of choice.

Editor’s Note: Unfortunately, there’s little any individual can practically do to change the trajectory of these trends in motion.

That’s why Doug Casey and his team just released an urgent new video with all the details. Click here to watch it now.