If You Want the Best Investments, Think Globally

The assumptions you made and the lessons you learned twenty years ago are long out of date.

Think back to 1996. In the infancy of the internet, three of the top websites on the internet were AOL, Yahoo, and Netscape.

Fast forward to the year 2020 and each of those top websites is either gone or at the brink of extinction, with the exception of Yahoo, which has seen a dramatic loss in their market share to other search engines such as Google and Bing.

Had you firmly held onto any of those original pioneers, it would have been the same as holding a lit match too long.

The only thing constant in life is change. The same applies to the global investment landscape, both then and now. Countries that weren’t even on the radar 20 years ago are now developing at a rapid pace, while others fall in and out of favor.

In this article, we’ll tell you why. Then, come back Friday and we’ll dive into our Ultimate Guide on How to Invest in Real Estate Overseas.

Throughout their lives, most people do as they’re told and stay in their lane – they study something “safe”, go with a traditional employer, and hope that by the end of it they’ll get a nice retirement, courtesy of the government’s Ponzi scheme.

They follow a script, and if the script doesn’t say to look elsewhere, they won’t.

By the time life gives people the big green light to invest somewhere, it’s usually far too late as those opportunities have already been used up.

On the other hand, for those who understand how the world is changing, there are great opportunities. All you need is to know where to look.

Ask most Americans about investing opportunities in Georgia, and they’ll think you’re referring to the US state. Some will even be surprised by the fact that there is a whole country with that name. And I can assure you, almost no one will know that it’s the sixth most business-friendly country in the world.

There are millions of opportunities out there, but if you follow what the average person does, you’ll get average results.

Don’t be afraid to be different and explore the world for yourself.

I’ve been going to Bogota, Colombia for the last six years. Every single time, I’ve been astounded by what is happening. The country is growing before my eyes. Where there were once small residential homes there are now tall buildings.

I’ve seen this happen, almost on repeat, in countries across the globe.

The people who invest in Colombia now are going to do extraordinarily well when it properly kicks off and people finally acknowledge this thriving economy.

But people from the US and Europe mostly look on in shock, screaming from the rooftops that those places aren’t safe and nobody should invest there.

It’s the textbook definition of an arbitrage opportunity, which is where you’ll find your best investments. Colombia is home to Latin America’s second most free economy, offers numerous immigration benefits, and has a wide array of investments that will produce high-rental yields.

Not only that, but it’s cheap, especially as the currency has gone down in recent times.

Any successful person knows of Warren Buffett’s recommendation that you should be greedy when others are fearful – and that’s what I’m doing. I know I am getting a great deal by getting in early.

But Colombia is just one example. Right now, I am in Kuala Lumpur, Malaysia which underwent a similar development revolution not too long ago.

You can see for yourself if you look at the 1999 film “Entrapment” with Sean Connery and Catherine Zeta-Jones in which they pull a heist on the then newly-built Petronas Twin Towers in Kuala Lumpur. In the scenes where they look out of the window, you can basically just see rural sprawl and low-rise buildings for miles.

Nowadays, even if you’re on the nearby street of my apartment here, you can’t see the Petronas Twin Towers because there are so many high-rises in the way.

This change from an agrarian economy to a successful business hub occurred while most Westerners were wholly unaware that it was even happening. And it was mostly over-and-done-with in under twenty years. 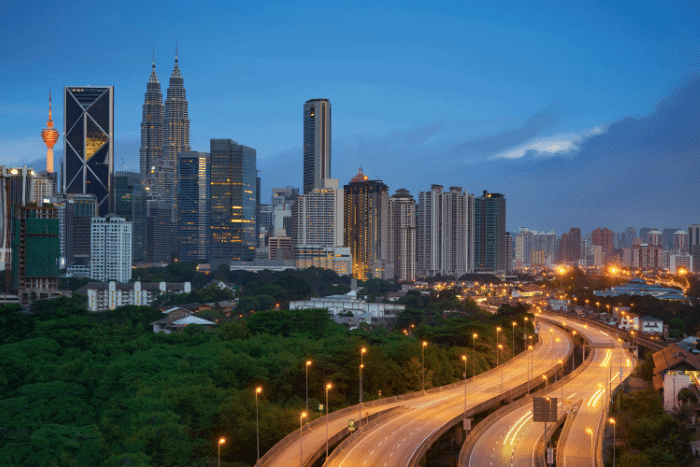 The Next Big Thing

Our quest here at Nomad Capitalist is to find the next big thing. I even have full-time researchers whose sole job is to go and find these hidden gems.

By all means, if you want it easy and you have the money to waste, go to Singapore, New Zealand, and other well-documented places. They’ll treat you well and they will continue to do so for a long time to come.

Just know that you’re leaving money on the table by doing that.

JFK’s father, Joe Kennedy, a rather smart and successful businessman of his time, once said that the way he knew to sell his stocks before the Great Depression was when the kid shining his shoes started giving him investing advice and hot picks.

Since shoe-shine kids aren’t particularly high up the food chain in the financial world, you would just be getting leftover crumbs of someone who just had a feast by going after that investment opportunity – second-hand crumbs at that.

The same is true when your neighbour, coworker or family member, who barely understands finances and investing abroad, starts telling you (completely unprompted, might I add) about hot new opportunities.

If you want the best deals, if you want to find the places that are untouched, you have to do what other people are unwilling to do. You have to stay ahead of the curve.

This is my strategy.

The Many Next Big Things

What I’ve realized from my research is that there isn’t just going to be one next big thing, but many of them.

There isn’t going to be “the next Singapore” – it became a thing in a time and place when there wasn’t any direct competition.

The world is getting more complex by the day and everyone’s getting richer.

Just in my life, Communism fell and there’s been an unprecedented growth of the middle class.

Scientist and Businessman Matt Ridley well made the point in his book “The Rational Optimist” that even the poor in developed economies have access to the lifestyle of the kings of old.

Louis XIV, the Sun King, had the wealth of a kingdom at his disposal, but he still pooped in a pot that was left to stink the halls of Versailles until a servant found it and got rid of it; he might have had numerous cooks but not one could cook for him Mexican or Thai food whenever he wanted; if he had a headache he might have had blood-letting as aspirin wouldn’t be invented for another 250 years.

Progress is not going to stop any time soon and we should get used to the fact that the only thing constant in life is change.

It’s not just the countries you know and are familiar with that are developing, it’s all of them. And among them, there are some that will do extraordinarily well in the foreseeable future.

That is where you will find your best investments – where the world is growing and developing. Higher interest rates, better yields, wide-open opportunities… they are all out there. You just have to shift your mindset and think globally.

The best time to plant a tree was ten years ago, but the second-best is today. Reach out and we can help you find what your next big thing is going to be.