How to Survive the “Deep State” 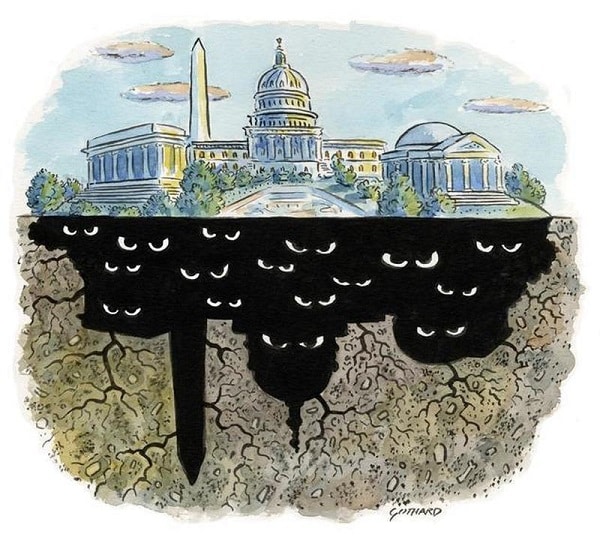 Almost everyone looks for a political solution to problems. However, once a Deep State situation has taken over, only a revolution or a dictatorship can turn it around, and probably only in a small country.

Maybe you’re thinking you should get behind somebody like Ron Paul (I didn’t say Rand Paul), should such a person materialize. That would be futile.

Here’s what would happen in the totally impossible scenario that this person was elected and tried to act like a Lee Kuan Yew or an Augusto Pinochet against the Deep State:

First, there would be a “sit-down” with the top dogs of the Praetorian agencies and a bunch of Pentagon officers to explain the way things work.

Then, should he survive, he would be impeached by the running dogs of Congress.

Then, should he survive, whipped dog Americans would revolt at the prospect of having their doggy dishes broken.

Remember, your fellow Americans not only elected Obama, but re-elected him. Do you expect they’ll be more rational as the Greater Depression deepens? Maybe you think the police and the military will somehow help. Forget it…they’re part of the problem. They’re here to protect and serve their colleagues first, then their employer (the State), and only then the public. But the whipped dog likes to parrot: “Thank you for your service.” Which is further proof that there’s no hope.

So what should you do, based on all this? For one thing, don’t waste your time and money trying to change the course of history. Trying to stop the little snowball rolling down the mountainside might have worked many decades ago, but now it’s turned into a gigantic avalanche that’s going to smash the village at the bottom of the valley. I suggest you get out of the way.

What, you may ask, would I do if I were dictator of the U.S. and had absolutely no regard for my personal safety? Here’s a seven-part program, for entertainment purposes only:

I like this program from a practical point of view, because when a structure is about to collapse, it’s much wiser to conduct a controlled demolition than to just let it fall when no one expects it.

But I also like it from a philosophical point of view because, as Nietzsche observed, that which is falling deserves to be pushed.

There are, however, two very important reasons for optimism: science and savings.

Science: Science and technology are the mainsprings of progress, and there are more scientists and engineers alive today than have lived in all previous history put together. Unfortunately for Western civilization however, most of them are Asians. Most American PhDs aren’t in Rocket Science but Political Science, or maybe Gender Studies. Nonetheless, the advancement of science offers some reason to believe that not only is all this gloom and doom poppycock, but that the future will not only be better than you imagine, but, hopefully, better than you can imagine.

Savings: Things can recover quickly because technology and skills don’t vanish overnight. Everybody but university economists knows that if you want to avoid starving to death, you have to produce more than you consume and save the difference. The problem is twofold, however. Most Americans have no savings. To the contrary, they have lots of debt. And debt means you’re either consuming someone else’s savings or mortgaging your own future.

Worse, science today is capital intensive. With no capital, you’ve got no science. Worse yet, if the U.S. actually destroys the dollar, it will wipe out the capital of prudent savers and reward society’s grasshoppers. Until they starve.

Of course, as Adam Smith said, there’s a lot of ruin in a nation. It took Rome several centuries to collapse. And look at how quickly China recovered from decades of truly criminal mismanagement.

On the other hand, Americans love their military, and this heavily armed version of the post office seems like the only part of the government that works, kind of. So maybe the U.S. will start something like World War III. Then, the whole world can see a real-life zombie apocalypse. Talk about free entertainment…

But let’s return to the real world. What should you do? And how will this all end?

From a personal standpoint, you should preserve capital by owning significant assets outside your native country, because as severe as market risks are, your political risks are much greater.

The Second Law to the Rescue

From a macro standpoint, don’t worry too much. The planet has been here for 4.5 billion years and it has a life of its own. You don’t have to do anything to save the world. Instead, rely on the Second Law of Thermodynamics.

There are very few laws I believe in, but this is one of them. There are many ways of stating the law, and its corollaries, but this isn’t an essay on physics. In essence, it states that all systems wind down over time. Entropy conquers all. That all systems collapse without constant new inputs of energy. And that the larger and more complex a system becomes, the more energy it requires. The Second Law is why nothing lasts forever.

In human affairs, you can say stupidity is a corollary to the Second Law, in that it throws sand in the gears of society and accelerates the tendency of things to collapse. But stupidity doesn’t always mean low intelligence…most of the destructive sociopaths acting as top dogs have very high IQs. I want to draw your attention to more useful definitions of stupidity.

One definition of stupidity is an inability to predict not just the immediate and direct consequences of an action (which a typical six-year-old can do) but also to fail to predict the indirect and delayed consequences.

An even more helpful definition is: Stupidity is an unwitting tendency towards self-destruction. It’s why operations run by bad people always go bad. And why, since the Deep State is run by bad people – the sociopaths who are actively drawn to it – it will necessarily collapse.

The Second Law not only assures that the Deep State will collapse but, given enough time, that all “End of the World” predictions will eventually be right, up to the heat death of the universe itself. It applies to all things at all levels…including, unfortunately, Western civilization and the idea of America. As for Western civilization, it’s had a fantastic run. Claims of the politically correct and multiculturalists aside, it’s really the only civilization that amounts to a hill of beans.

Now, it’s even riskier calling a top in a civilization than the top of a stock or bond market. But I’d say Western civilization peaked just before World War I. In the future, it will be a prestige item for Chinese families to have European maids and houseboys.

As for America, it was an idea – and a very good one – but it’s already vanished, replaced by the United States, which is just one of 200 other nation-states covering the face of the Earth like a skin disease. That said, the U.S. peaked in the mid ’50s and has gone down decisively since 1971. It’s living on stored momentum, memories, and borrowed Chinese money.

Let me bring this gloomy Spenglerian view of the world to a close with some happy thoughts. You want to leave them laughing. Not everybody went down with the Titanic.

Looking further at the bright side: Just being born in America in the 20th century amounted to winning the cosmic lottery…an accident of birth could have placed us in Guinea or Zimbabwe. On the other hand, if I wanted to make a fortune in today’s world, I’d definitely head to Africa.

But just as the Second Law dictates that all good things, like America, must come to an end, so must all bad things, like the Deep State in particular. That’s a cosmic certainty. We all love the idea of justice, even if most people neither understand what it is, nor like its reality.

Finally, it occurs to me that, while I hope I’ve explained why the Second Law will vanquish the Deep State, I’ve neglected to explain how whipped dogs can profit from the collapse of Western civilization.

The answer is that they can’t.

Fortunately, parasites can only exist as long as their host. Which is actually a final piece of good news I want to leave you with.