How To Invest in Southeast Asia Real Estate

A mistake people often make when doing business abroad is taking the rules of the game they are used to playing by and trying to apply them to the rest of the world.

The problem? The rest of the world might not play by the same rules.

This is especially true when people try to buy property as they do in the West, where the real estate markets are very well evolved.

Partially because many of the developed, or near developed, economies have modeled themselves after the US, many of the rules still apply. So, if you want to buy a property in places like Singapore and Malaysia, chances are that you will do it via a realtor.

However, when investing in frontier markets, you will have a hard time trying to play by the same rules. If you are thinking of investing in Southeast Asia, then you’ll have to do it their way.

At least, if you want to do it profitably.

In this article, we’ll look at why you should avoid realtors in these frontier markets, what to do instead to find good property deals, and where to look to find the very best markets.

We’ve covered before in-depth how to invest in real estate markets overseas, but the key takeaway is that the less developed a country is, the more important personal contacts are.

In these emerging economies, it is often rare for people to move houses frequently, and as a consequence, they aren’t in a particular rush to sell.

It’s customary for people in frontier markets to just put a “for sale” advertisement on their window and wait until the right buyer comes along. Given this relaxed attitude, it’s awfully difficult to convince them to pay a 2%-3% commission to the realtor that would get them a client quicker.

Realtors are primarily there to cater to Western clients who are used to having them, not locals. This means you will definitely be paying a “foreigner tax” on the transaction.

This is because you are perceived to have a higher purchasing power. Your realtor gets paid a percentage price of the sale, therefore their financial interests are aligned to overcharging you for the transaction.

The only benefit is that they will help you with translation, dealing with documentation, as well as bureaucracy, but at a very steep price.

You’ll be hard-pressed to break even on deals like this, unless you happen to be in an area where there is a massive spike in the demand for real estate, without a proportional rise in supply, immediately after your purchase.

How To Invest In Southeast Asia

In emerging markets where there aren’t real estate buying and selling platforms, or it’s uncommon for people to change houses more than once in their lifetime, the most important thing is personal contacts.

This is how you get around the need for realtors –  who would take advantage of you – by sidestepping them entirely and going to the source.

Of course, this brings two problems – communication and finding people to communicate with. Overcome those two issues and you will be able to work like a local, as well as pay local prices:

Communication – There is no getting around it, most opportunities happen in the local language. If someone bothers to translate the sales pitch, it’s because they’re likely to go for a price point that the average person wouldn’t be able to ever pay, or be interested in.

A good rule of thumb I follow in some countries when trying to find a good restaurant is whether their menu at the front is in English. If it is, it usually means they’re targeting tourists and don’t really care about repeat business. So, the food isn’t likely to be all that great.

The same type of thinking ought to apply in real estate. If your foreign sensibilities are being targeted, you should perhaps ask why.

Hence, what I sometimes do is hire a local and trustworthy person to work as my agent and translator. Yes, it is an added expense, but it more than pays for itself if you use their knowledge and “insider status” correctly.

Finding Opportunities – You need to go old school and be creative about it. I have a friend who would go around Cambodia with a motorbike, cruising an area that he liked and taking note of all the “for sale signs”. Then, he hired a local to contact each number and inquire what their asking price was and analyze whether it might be a good deal.

Other good options are Facebook groups and word of mouth if you already have a network of acquaintances in the city.

So, now that you know how to go about it, which Asian frontier market should you go for? 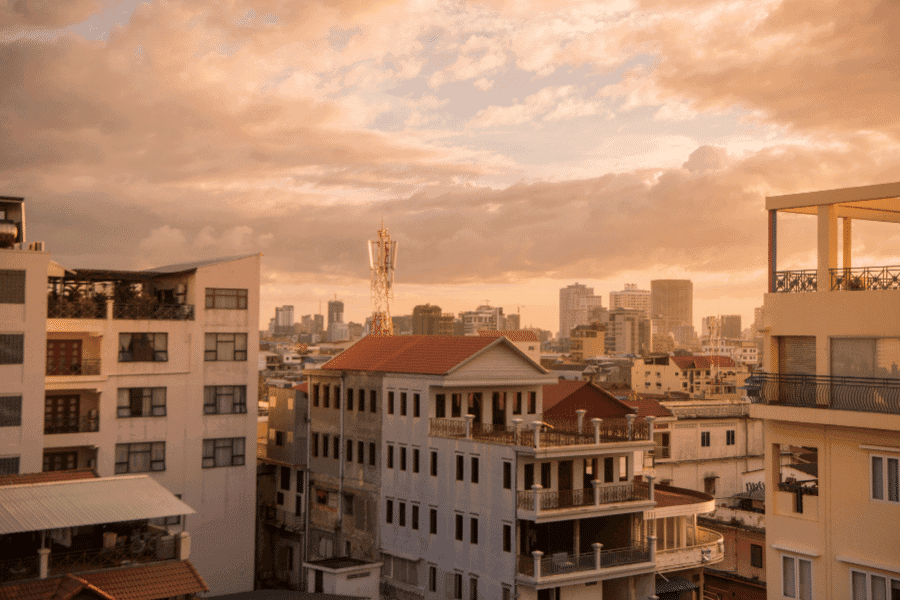 Cambodia’s economy has done nothing but go up in the past decades, making its real estate market a fantastic opportunity for anyone investing in Southeast Asia.

If you’re among one of the entrepreneur expats investing overseas, you’re likely wondering what country is the best for investing in Southeast Asia. This is a question with many answers, depending on what your priorities are, what your budget is, your timeframe, etc.

Personally, Cambodia as a frontier market investment is the perfect middle ground. The real estate in the country is still cheap, but it is developing at a fast enough pace to pay off sooner, rather than later.

Furthermore, its currency is among one of the most stable and profitable ones of the last few years. Partially, the reason for this is that Cambodia is a member of the ASEAN bloc of countries, which functions as a proto-EU and provides economic benefits for joining, so the currency is always in demand.

This is why Cambodia attracts foreign investors, it’s at the crossroads of all these competing priorities – and this is without having even mentioned that the country is sandwiched between Vietnam and Thailand, which are also developing at a very fast pace.

Overall, Asia is poised to be the economic boom area of the next few decades, and getting in at the ground floor when it’s accessible is a fantastic opportunity.

So, in six words, if you were to ask me “why invest in Cambodia?” I would simply answer that “it’s the chance of a lifetime.”

If you want to know more about how to invest in Southeast Asia and are interested in including Cambodia in your investment portfolio, feel free to reach out to our team. International investment is one of the pillars of our holistic and bespoke offshore plans.

We would love to help you get started.