How to Get a Second Passport

The biggest threat to your personal freedom and financial security is the government, hands down.

Today, skyrocketing government debt is only making that threat worse. In the US, the bill amounts to more than $220,130 per taxpayer.

At some point soon—in a desperate attempt to squeeze citizens for every penny—politicians will try to further restrict people’s movements. They may even prohibit people from leaving outright.

There’s also a federal exit tax. It’s a significant blow to wealthy people giving up their US citizenship.

But wealthy people (and Americans across the board) are not the only ones at risk.

Many countries have notoriously turned to people controls at one point or another. For example, the Soviet Union routinely revoked the citizenship of its perceived internal enemies.

In Castro’s Cuba, the government made citizens apply for exit visas to leave the island. It did not grant them easily.

Or look at how the US government revoked Edward Snowden’s passport with the stroke of a pen.

This all reinforces a grave truth… You don’t own your passport or your citizenship. The government does. And it can use that as a weapon.

If you hold unpopular political views, don’t be surprised if the government restricts your travel options. The same goes for wealthy people who want to leave a country in financial trouble.

The good news is, you can do something about this problem…

A second passport is your best insurance against any out-of-control government.

You probably know the benefits of diversifying your investment portfolio. If you put all of your asset “eggs” in one basket, you could lose your entire portfolio if that basket breaks.

The same idea applies to political risk… the risk bureaucrats and politicians pose to you.

Most people have medical, life, fire, and car insurance policies. You hope you never have to use these policies. But you have them anyway. They give you peace of mind and protection if the worst comes to pass.

I call it “freedom insurance.”

It frees you from dependence on any one country. Achieve that freedom, and it becomes extremely difficult for any one group of bureaucrats to control you. The results can be life-changing.

A second passport is a crucial piece of the puzzle. Among other things, it lets you invest, bank, travel, live, and do business in places you otherwise couldn’t.

Unfortunately, there is no route to a genuine second passport that is fast, easy, and cheap. Deciding the best place and way to get one is not necessarily simple. There is no one-size-fits-all solution.

But today I’ll show you the path of least resistance.

It helps to view the whole world as your hunting ground. Don’t dismiss the idea of becoming a citizen of a small or backward country. Unlike most mega-government countries, these places generally lack the capacity and desire to monitor their citizens or treat them as milk cows.

How to Get a Second Passport: The Four Roads

There are exactly four legitimate routes to a valid second citizenship and passport. If you hear about a fifth route, assume it’s a scam.

To find the best route for you, start with the decision tree below. 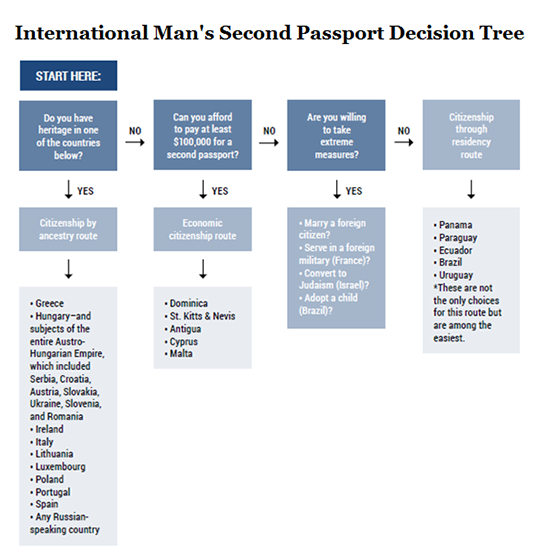 No matter the country or method, you should be able to point to specific naturalization laws with explicit requirements. Everything should be clearly spelled out in black and white. You’ll usually find this information on a government, consulate, or embassy website.

Route No. 1: Citizenship by Ancestry

If you qualify, a citizenship-by-ancestry program is the fastest and cheapest route.

Each country has its own eligibility requirements and procedures. If you have an ancestor from one of these countries (usually no more remote than a great-grandparent), you should find citizenship information on the country’s website. Or you can visit the consulate.

If you’re eligible, you will need to give the consulate official legal and translated documents (birth certificates, marriage certificates, death certificates, naturalization records, etc.) proving lineage to the relevant ancestor when you apply.

Economic citizenship is the most expensive route to a second passport. But it’s also the quickest.

You make a substantial payment or investment, and in return, the government grants you full and permanent citizenship. You can often complete the process in a matter of weeks. And you don’t ever need to live in the country.

Currently, the governments of Dominica and St. Kitts & Nevis (two English-speaking countries in the Caribbean) offer the only established and reliable economic citizenship programs. A passport from either government enables visa-free entry to most of Latin America, the Caribbean, and Europe.

Dominica is currently the cheapest option. It requires a donation to the government starting at $100,000. You should also expect additional administrative costs for due diligence, background checks, processing, and other fees. That can amount to at least $10,000.

Other countries also offer economic citizenship programs. But they haven’t been around nearly as long as the Dominica and St. Kitts programs.

A reliable and stable history is important. Ultimately, any government has the authority to revoke the passport and/or citizenship of any of its citizens at any time for any reason, real or concocted.

A shift in the political winds could mean that an economic citizenship program in favor today could be out of favor tomorrow. That could have negative consequences for foreigners who participated in the program.

Only the St. Kitts and Dominica programs have stood the test of time (decades) and been successfully used by thousands of people.

If you’re willing to take extreme measures, there are shortcuts.

You could marry a foreigner. Many countries will grant citizenship to foreign spouses after a period of time, usually at least two years.

Jews are eligible for Israeli citizenship. However, in most cases, military service is required of applicants over the age of 18.

Brazil offers a shortcut to citizenship for those who adopt a child.

So, if the family bloodline leads to a dead end… and you aren’t willing to marry a foreigner, serve in a foreign military, or take any other extreme measures… and you can’t afford an economic citizenship program… the last route is permanent residency.

Most countries will grant citizenship after five or so years of permanent residency. Some take more time, some take less.

Here, again, the time requirement varies widely. And these requirements are constantly changing. Some countries require you to spend substantial time on the ground and build real connections to the country. Others are less stringent.

Some factors you should weigh in considering a country’s program:

The easiest route to citizenship in a second country will differ for most people, depending on their personal circumstances. It’s not a fun process any way you slice it, but that should not dissuade you. The benefits far outweigh the costs.

The rules on second passports can change quickly. So it’s important to have the most up-to-date, accurate, and actionable information out there.

Be sure to get our guide we just released on the easiest countries to get a second passport from. Click here to download the PDF.