The mainstream narrative is so corrupted by greed, sloth, and groupthink that it has become a caricature of itself. In plain English, what is held to be true by the powers-that-be is flat-out unreliable, unhinged, and unsustainable.

For instance, the mainstream media is giddy about the new stock market forecast from Goldman’s chief equity strategist, David Kostin.

According to this overpaid genius, the silver bullet of a COVID vaccine is now assured, owing to the Pfizer announcement, so we will soon be back to normal, and the S&P 500 will soar to 4,300 by the end of 2021.

Back up the trucks!

Then again, it needs to be recalled that, in their wisdom, sell-side analysts now see December 2020 trailing earnings on the S&P 500 coming in at $91.80 per share and then leaping upward by 47% to $135.13 per share by December 2021. Even if the latter hockey stick should come true, the implied PE multiple at Goldman’s new December 2021 price target is 31.8X.

You’ve got to believe that neither Sleepy Joe, Kamala Harris and her progressive-left comrades, COVID, nor a gridlocked Washington will stand in the way of a booming return to economic normalcy, a 47% gain in profits, and a PE multiple more than double the historical average. 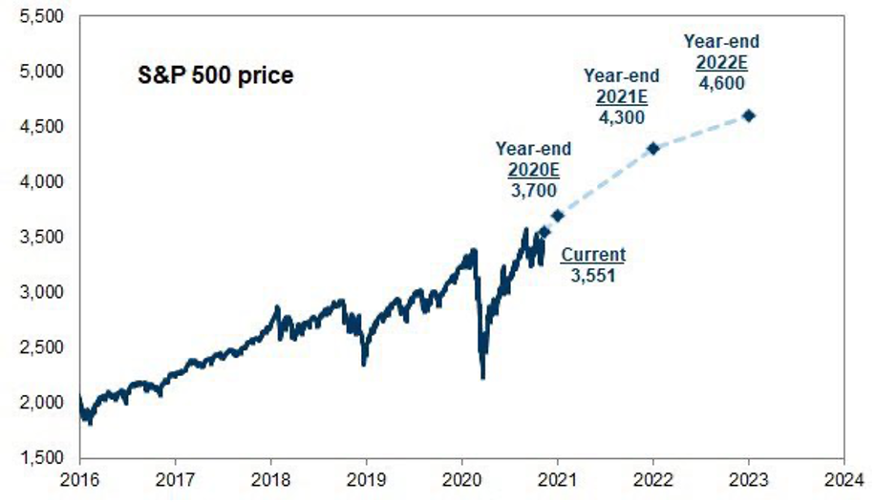 Of course, Goldman doesn’t base its stock price forecast on the kind of earnings that CEOs and CFOs must report honestly to the SEC on penalty of jail time: namely, GAAP net income.

They want you to believe that multiples are reasonable through the use of ex-items earnings, which are always 10%–30% higher than reported earnings. That’s because they eliminate purported one-time gains and losses and non-cash items charged to the P&L in the current period, like goodwill write-downs or restructuring provisions.

But here’s the thing. Anything that hits the income statement was a cash item at some point in either the past (e.g., goodwill) or the future (e.g., restructuring provisions). If it carries a negative sign, it represents a dissipation of corporate resources and value.

So you can take the “reasonable” PE canard with a grain of salt, but even then, the current Goldman stock price forecast embodies the mother of all hockey sticks.

That is, ex-items earnings for the S&P 500 are now forecasted by the street consensus to weigh in at $117.36 per share for the December 2020 LTM period, which will push Goldman projects to rise to $175 per share by December 2021.

So you have to believe that ex-items earnings will soar by 50% in just one year’s time and still be willing to pay 24.5X for the said miracle of escape from a COVID lockdown-shattered economy.

“Unhinged” does aptly characterize the current mainstream narrative. That’s in part because we think the imminence and efficacy of the vaccine silver bullet are way overdone. Also, despite the Fed’s best verbal flim-flam, we do not think the laws of sound money have been repealed and that the Fed can keep monetizing 100% of Uncle Sam’s $2–3 trillion deficits indefinitely.

Yet, if there is no vaccine silver bullet next year, you will have the Virus Patrol reenergized.

Likewise, if the Eccles Building does not keep buying up Uncle Sam’s tsunami of debt, the bond market is a cataclysm waiting to happen.

As to the silver bullet, just consider what Pfizer actually reported. Namely, that from a trial pool of 43,538 participants, they now have results for 94 individuals who tested positive for COVID, of which 86 were in the placebo group and eight among those getting the two-shot vaccinations.

That’s how they get their ballyhooed 90% effectiveness claim. That conclusion is based on only 0.216% of the trial universe, yet the company’s press release—which enabled the CEO to sell 60% of his stock recently at a huge profit—contained zero information on whether the 94 cases were representative of the study population with respect to age, medical condition, and so on, and whether the actual COVID cases among the 94 reported to have tested positive were sniffles, mild, moderate, severe or death-threatening.

The truth is, the company’s press release amounted to nothing more than an (apparently) legal stock touting ad. Mr. Albert Bourla is now $6 million richer, but the most substantive thing contained in the press release not previously known was, well, this bit of soap-selling:

“Today is a great day for science and humanity. The first set of results from our Phase 3 COVID-19 vaccine trial provides the initial evidence of our vaccine’s ability to prevent COVID-19,” said Dr. Albert Bourla, Pfizer Chairman and CEO.

This gets us to the point that the irrepressible Jon Rappaport keeps rising. To wit, why would anyone think that a 0.216% share of the trial universe is meaningful or reliable?

Moreover, why would the FDA go along with this, or especially the entire study protocol, about which the company’s press release conveys the following:

“The trial is continuing to enroll and is expected to continue through the final analysis when a total of 164 confirmed COVID-19 cases have accrued.”

Yes, forget about the 43,538 participants and all the efforts to ensure its representative nature because Pfizer is going to quit when exactly 0.377% (164 participants) of the sample have reported.

A halfway attentive layperson might well wonder what is really going on here.

But having said that, he might, upon modest further investigation, also grasp the entire scam involved in fast-tracking the vaccine.

The reason for shutting down the trial after less than one-half of one percent of the participants have been heard from is that in this day and age, you can’t test a vaccine candidate by deliberately infecting a patient with the virus, most especially the unlucky folks who get the saltwater tablet placebo.

Instead, what you have to do is put your feet up on a stool and wait for participants to contract the disease and become infected in the “wild”—that is, in their homes and on the highways and byways of normal life.

But alas, Tony Fauci and his malpracticing doctors, the wannabe Robespierres they have unleashed among blue-state mayors and governors, and the constant chyrons of death running across the cable TV screens have most of the sheeple, including those enrolled in the Pfizer study, scared to death. So they do not leave home without their mask up and without social distancing on the sidewalks, hallways, and grocery store checkout counters.

So, then, how in the hell are study participants supposed to catch the COVID in the wild?

Under the rules of ethics in these matters, the ones getting the real shot cannot even be told to get frisky and drop their mask every now and then in order to help the corporate folks at Pfizer complete their study and harvest their tens of billions of vaccine sales.

Needless to say, that’s why only 0.216% of participants (94) managed to get the plague, which is allegedly running rampant in America, during the first three months of the trial, and why at that rate, it would take 11 years to get a return from even 10% of the participants.

So there is a reason why it normally takes three to five years to do a vaccine trial: It seems that even the FDA is unwilling to let drug companies deliberately kill placebo-taking patients in order to speed up the process.

And that gets us to an even more insidious aspect of the silver bullet myth.

Namely, because it takes so ungodly long for mask-up trial participants to get infected in the “wild” when the latter is operating effectively under economic martial law, the study protocol assumes that any old case will do—even if it is so mild as to be barely symptomatic and readily cured with bed rest and drinking lots of liquids.

As Jon Rappaport noted regarding the generic case with all of these COVID vaccine trials:

“You see, the vaccine maker starts out with 30,000 HEALTHY volunteers. So, if they waited for 150 of them to come down with severe pneumonia, a serious case of COVID, how long do you think that would take? Five years? Ten years?

These 150 COVID cases the vaccine maker is looking for would be mild. Just a cough. Or chills and fever. That scenario would only take a few months to develop. And face it, chills, cough, and fever aren’t unique to COVID. Anyone can come down with those symptoms.

THEREFORE, THE WHOLE CLINICAL TRIAL IS DESIGNED, UP FRONT, TO FIND 150 CASES OF MILD AND MEANINGLESS AND SELF-CURING ‘COVID.’

About which, no one cares. No one should care.

But, as we see, Pfizer is trumpeting their clinical trial of the vaccine as a landmark in human history.”

What Rappoport is saying is that by the very nature of COVID, the only point of a vaccine is to protect the small minority who develop severe cases owing to age, comorbidities, or otherwise weakened immune systems, and especially those who suffer a life-threatening course of the disease.

But as of the present, the CDC estimates that about 88 million Americans have been infected—the overwhelming bulk of whom were unaware that they were infected because they were asymptomatic or experienced mild courses of the disease and were cured at home.

In fact, according to recent CDC data, only 500,000 of these 88 million have been hospitalized. And according to the CDC’s expansive way of counting, the number of COVID deaths stands around 269,000, the majority of which occurred in hospitals.

So no matter how you slice it, more than 87 million of the 88 million infected persons so far were in no mortal danger, nor would they have been helped much even if Pfizer’s vaccine or any other vaccine had been available from day one.

So the question recurs. Among the 94 cases reported, how many required hospitalization or involved even a serious home-cured course of the illness?

The company’s press release didn’t say, and when they run the clock to the FDA-approved protocol’s 164 positive-cases mark, they still won’t say.

That’s because, again, due to the any-case-will-do study design, the trial results cannot prove that the vaccine is effective in individuals who would otherwise suffer a severe course of the disease. In fact, according to the current national metrics, among any random universe of 164 infected people, exactly 0.9 persons would be hospitalized, and 0.4 persons would die.

Alas, perhaps even the purportedly brilliant Mr. Kostin would agree that you can’t prove efficacy by comparing fractions of a person.

Nevertheless, out there in the wild, after the vaccine is broadly distributed by, say, next June, the universe of the vaccinated will not be 88 souls as at present with the Pfizer study, but tens of millions. And if the vaccine doesn’t work on the severe cases and even a few hundred deaths and/or hospitalizations are reported among the vaccinated, there will be panic in the already-frightened streets.

As we said, the mainstream narrative is risibly corrupt.