Gridlock Is Good—Except In The Jaws Of Massive Public Debts 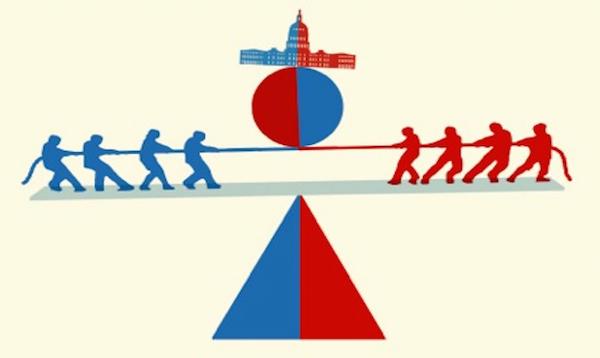 James Madison is surely smiling from his grave.

Pursuant to his constitutional design, a badly divided electorate got an utterly gridlocked government—with the Supreme Court and Senate in the hands of one party and the House of Representatives and White House marginally in the hands of the other. That’s as good an RX against tyranny as it gets.

Vlad Putin is probably smiling, too. His economy is being battered by Washington’s bully-boy sanctions because he has been falsely accused of throwing the election to Trump in 2016. This time, even by the lights of the Dem and Deep State Russophobes, however, Putin appears to have been AWOL.

Yet the natural Blue Wave that was allegedly aborted in 2016 by Putin’s hackers and social media trolls didn’t happen. What we got, instead, is Sleepy Joe (apparently) stumbling into the Oval Office with few electoral college votes to spare. That is, the real people of Flyover America, not the Kremlin’s trolls, again voted for the Donald and came up but a whisker short.

Ordinarily, conservatives should be smiling most of all. Donald Trump is no friend of liberty, small government or fiscal and monetary rectitude, and he’s now (almost) gone.

More broadly, large, fully mobilized governmental majorities are the handmaids of Leviathan. Always and everywhere the expansion of state power gets abused by ambitious politicians and government apparatchiks for the benefit of the few at the expense of the many. So paralyzed government is just the thing to safeguard personal liberty and private prosperity.

Nor are we talking just, or even mainly, about the threat of old-fashioned mailed fists and boot-heel tyranny where citizens are rounded up and jailed. Today’s Leviathan presents more often than not as the Nanny State, wielding a velvet glove of regulation, taxation and fiscal subvention in the name of the public welfare and protection of citizens from themselves.

But the result is tyranny just the same.

The War on Drugs is a 50-year old example, while the swift, shocking and economically catastrophic imposition of economic martial law last spring to eradicate a super-flu is but the latest. Yet now this eight-month old excrescence of Nanny State oppression threatens constitutional government and capitalist prosperity like rarely before.

So the fact that the Dem majority in the US House has been cut and the Senate will likely remain Republican is in many respects all to the good.

Even better, Sleepy Joe may well abdicate to a Kamala Harris Regency, but it will be one shorn of the Progressive/Left part of the equation. That’s because on substantive legislation it will take 60 votes to break a Senate GOP filibuster, but it will be a rare day inside the beltway when 100% of the Senate Dems including Manchin (WV) and Tester (MT) and 11 Republicans are corralled in favor of the kind of Bernie/AOC stuff that got stuffed into the Dem platform.

To the contrary, we can already hear the cries of “sell-out” and “betrayal” coming from the Progressive-Left whenever Sleepy Joe or Kamala, as the case may prove to be, send their equivalent of Stevie Mnuchin, knee pads in hand, up to Capitol Hill to pleasure with compromises Senate Leader Mitch McConnell, who is now secure in another six year term and a guaranteed 60-years on the public teat.

Indeed, we suspect the Washington Republicans—as undeserving and feckless as they have been for years—may end up with the best of all worlds. That is, being handed a cornucopia of attackable red meat for the 2022 mid-terms owing to the tabling of leftist agenda measures by a Biden Administration chok-a-block with progressives and woksters, even as they would have odds-on capacity to block Senate passage or even serious consideration.

So far, but, finally, not so good.

Alas, the one great flaw in James Madison’s design for a democracy hobbled with checks and balances is the case where the horse manages to get out the barn door, anyway. Then you need strong majorities on both sides of Capitol Hill aligned with White House policies in order to enact positive measures to put the horse back in its stable.

We are referring, of course, to the calamitous fiscal estate that has resulted from 40-years of deficits-don’t-matter drift and 4 -years of the Trumpian fiscal bacchanalia.

The whole thing is now one giant Doomsday Machine driven by trillions per year of automatic entitlements, a rapidly swelling retirement-based Welfare State and a deeply embedded military-industrial-surveillance complex and its counter-part domestic pork barrels.

That all was bad enough, but the Lockdown Nation economic calamity and the Coast-to-Coast soup lines that have been enacted by the bipartisan duopoly to indemnify 150 million households and millions of businesses, almost certainly guarantee that the fiscal equation will now go tilt.

That is, a perpetually weak debt-entombed economy and the resulting depleted government revenues (including state and local government, which are the one thing Biden will get funded in the coming Everything Bailouts) will result in double-digit Federal deficits as far as the eye can see, as we will quantify on another occasion.

Needless to say, our newly-elected gridlocked government is not about to do anything to ameliorate this embedded fiscal calamity.

You can be sure that the GOP Senate won’t enact any material Biden tax increases; and by the same token, a Biden Administration already failing to make progress on the Progressive-Left agenda won’t be embracing social security, medicare and other entitlement reforms. And, of course, the merchants of war own the Congress regardless of party, election results or actual national security needs.

But here’s the thing. Under any circumstance, these now guaranteed double -digit annual deficits (i.e. $2 trillion plus at current GDP levels) aren’t sustainable because compounding interest expense eventually sends the ship-of-state into the fiscal drink.

In fact, in an economy that has been systematically and brutally stripped of private savings for decades by central bank financial repression, the only way to finance persistent double digit fiscal deficits and keep interest rates from lurching upward is via 100% monetization of new debt issues.

Undoubtedly, Wall Street’s talking heads might initially find that prospect untroubling, and perhaps even indulge in more insanity on the apparent theory that the great 2020 election uncertainty is coming to a imminent end, and that a nice, pro-stimulus 47-year Swamp Creature will be shuffling into the Oval Office.

Yes, the uncertainty about the name of the next president is ending soon, even as the Donald’s desperate effort to reverse his loss in Michigan, Wisconsin and elsewhere comes a cropper in a Supreme Court of his own making.

At the same time, a far more consequential uncertainty is just beginning. No known laws of economics or experiences of history permit 100% of massive public debts to be monetized indefinitely at the central bank’s printing press.

It is only a matter of time until the Fed’s prodigious money-printing blows the nation’s egregiously inflated and speculation-ridden financial markets sky high.

That’s the real end game of the gridlock that emerged from the vote on November 3. And it’s most definitely not the good kind imagined by the wise men who wrote the nation’s constitution.

That’s exactly why New York Times best-selling author Doug Casey and his team just released an urgent new PDF report that explains what could come next and what you can do about it. Click here to download it now.