Getting Out Before the Crash… 5 Secrets to Spot Market Tops

International Man: Markets have extreme emotions. They can go from irrational exuberance—where it seems everyone is swinging from the chandeliers—to a bottom-of-the-barrel bear market where people don’t even want to look at the business section.

Why is assessing the psychology of the market so important?

Doug Casey: The market, as Warren Buffett has pointed out, can be either a weighing machine or a voting machine. You can make money in the market either way, but you have to recognize which machine is giving you signals.

Although Mr. Market sees and knows almost everything, he pays the most attention to the voting machine, because he’s basically bipolar, a manic-depressive. As a result, not only do you have to deal with the psychological aberrations of millions of other people who are running in a crowd and voting with their dollars, but much more important, you have to deal with your own psychology. You are, after all, part of the market.

The only thing you can control, however, is your own psychology, not that of the market’s other participants. Once again quoting Buffett, “Be fearful when others are greedy. Be greedy when others are fearful.”

It’s a bit easier for me because I’ve been wired that way almost from birth, which got me into constant trouble in school. I was always labeled a troublemaker—an enemy of authority. Be that as it may, I just don’t like people telling me what to do. This can be a double-edged sword because one of the oldest sayings in the market is “the trend is your friend.” Most of the time, you actually want to go with the trend.

In other words, you don’t want to swim against the tide. You’ll get beat up and washed away, eventually.

What are some of the craziest things you’ve seen at market tops?

I’ve been interested in the markets and have watched them my whole life, gaining knowledge along the way.

The first wild and crazy market that I can remember personally was in the late ‘60s, when any stock that had the suffix “-ex” or “-onics” at the end of its name was considered an automatic buy. It was a huge tech bubble, like the one today. That was just before a gigantic crash, of course. And the market went nowhere until 1982 when it finally bottomed.

The first market bottom that I was able to take advantage of, however, was gold in 1971. I had read Harry Browne’s brilliant and short book, How to Profit from the Coming Devaluation, published in 1970.

It made all the sense in the world to me for good, logical reasons. I was a kid, just out of college and without much money, but I started buying gold coins and gold stocks. I went from just watching a manic top in the stock market to actually taking advantage of a bottom in the gold market.

Anyway, in the early ‘80s, there was a manic bottom in both stocks and bonds. Even the US government was paying 15% to 18% to borrow. I wrote “Strategic Investing,” which was published in November 1982. It was a stock market book. My big recommendations were electric utilities (they were yielding 12%–15% in current dividends) and the “Nifty Fifty,” a group of stocks that were never supposed to go down—things like Xerox and Polaroid. The Nifty Fifty were the Amazon, Facebook, and Apple look-alikes of the era. But they were crushed about 90% in the bear market that bottomed in 1982.

To give you an idea how grim it was, Businessweek had a front cover called “The Death of Equities.” 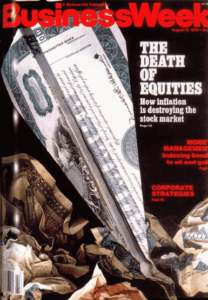 Incidentally, the only investment advice that somebody who is knowledgeable about market history really needs is on the covers of popular magazines, like the famous “The Death of Equities” Businessweek cover, which came out exactly at the bottom of the market.

They had another cover in 1984 titled “The Death of Mining,” which of course was the bell ringing for the bottom of the mining market.

You could save yourself a lot of money on financial newsletters if you just go down to the drug store every week and see what’s on the cover of magazines. You don’t even need to read the articles—journalists know nothing about the markets. Their opinions are, at best, contrary indicators. Once every year or two, there’s going to be a tip-off when they’re really bullish or bearish.

Of course, these things may now seem like ancient history. Talking about what happened in the ’60s, ’70s, and ’80s seems like my father talking about what happened in the 1930s and World War II when I was in college. It’s funny how time goes by. I once thought that the things he told me were ancient history and irrelevant, but they’re actually not. I was short-sighted, like most young people. Actually, one of my main interests today is ancient history—Rome and Greece. It helps put things into perspective.

More recent perspectives would include the Internet bubble of 2001, the current tech bubble, and, of course, the real estate bubble that crested in 2007, which was the opening round of the Greater Depression.

Right now, we’re in a stock bubble predictably focused on tech and a bond market hyperbubble. It could be that the current hysteria about the Wuhan coronavirus will be the pin that breaks the bubble. I doubt the epidemic itself will be serious in terms of actual deaths, like the Spanish flu of 1918, for several reasons. That was wartime, for one. For another, we have vastly more medical knowledge now than we had 100 years ago. That’s not to say it couldn’t turn out like something from a Stephen King novel that kills almost everyone. But the odds are against it.

What’s likely to be much more serious are second-order effects, such as Draconian laws and regulations, money printing, and general hysteria. It’s not going to be good. But let’s talk more about it next week, perhaps. Most comments on it are really just conjecture right now.

As a general rule, just watch for major tops and bottoms. You don’t have to “do” anything in the market almost ever. You should only act when the market really throws you a fat pitch. For instance, it’s insane the way the public is throwing money at trading services now because of FOMO—Fear Of Missing Out. That’s another giant bell ringing at the top ….

Just try to identify major tops and bottoms, if nothing else. Keep it simple. Right now, we’re at a major top in both stocks and bonds. Get out of the water.

And we’re at a major bottom in commodities—although not in gold. It last bottomed in 2014 at just under $1,100. Before that, in 2001, it was at about $260 when, believe it or not, gold was cheaper in real terms than it was in 1971. But the good news is that there’s clearly a bull trend underway in gold that’s going to take it to a new peak.

In fact, the next bubble is going to be in gold and gold stocks.

International Man: What are some signs that you see right now that we might be near the top in the broad stock market and in the economy in general?

Doug Casey: One sign is the fact that there are a lot of houses in the United States that are going for not just $10 million, but for $50 million, and apartments in New York going for $100 million. That’s a bell ringing at the top of the market.

It’s also evident in the so-called art market, which no longer has anything to do with taste, technical skill, or interesting ideas. It’s now mainly a question of hype and promotion, where embarrassing crap that a kid could put together in a finger painting therapy class is going for millions of dollars. What passes for art today is a degrading affront to intelligence and to civilization itself.

It’s another sign that there’s just too much funny money floating around out there, looking for someplace to go.

Watching what’s promoted in newsletter sales copy may be an even better indicator than magazine covers. As I said earlier, the public wants to buy trading services—a very bad sign. They’ve seen the rich making huge amounts of money. Desperate people with no market or economic knowledge think that some trader is going to give them secrets that will make them millionaires.

Worse is the fact the public will spend big money for tout sheets that seem to promise outlandish returns—100 to 1, or perhaps 473,251%, or the like. The fact that that the public will do that is a sign that there’s a top in the market.

When the bottom of the market comes, not only will people not want to subscribe to newsletters telling them how to get wealthy—they won’t even want to know that the market exists.

They’ll care less about the US stock market than they do about the Uzbekistan stock market. Worse, they’ll hate it, because it will have cost them so much money.

Let me again underline that the only things that I can see that are actually cheap are commodities. I say that because the producers of hogs, cattle, cotton, orange juice, coffee, corn, soybeans, copper—none of them are making any money.

Only the best producers are just breaking even. To me, this is one sign that commodities, which have been at a bear market now for over eight years, are scraping the bottom. If somebody’s looking to make money with their money, the place to look now is commodities.

International Man: It’s also something nobody wants to hear about, which proves your point.

Doug Casey: Absolutely. Nobody wants to hear about commodities.

Everybody wants high tech, software, and things of that nature.

Commodities are, however, the raw materials of civilization. They’re going to come back into fashion.

International Man: Speaking of covers of magazines, A recent cover of The Economist magazine had robotic bulls charging through the cover.

Have we reached peak optimism? 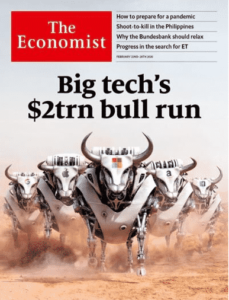 Doug Casey: To quote an old market saying, there is no telling how high a tree is going to grow. We just know that no tree grows to the sky.

That’s why they want to buy a magazine or read about it.

After the market’s been going up as long as it has and as strong as it has, a cover like this on a major magazine like The Economist is a tip-off. A few years from now, it will be as embarrassing as Business Week’s “Death of Equities” and “Death of Mining” covers.

Editor’s Note: Doug Casey’s forecasts helped investors prepare and profit from: 1) the S&L blowup in the ’80s and ’90s, 2) the 2001 tech stock collapse, 3) the 2008 financial crisis, 4) and now… Doug’s sounding the alarms about a catastrophic financial event.

To help you prepare and profit, Doug and his team have prepared a free special report. Click here to download the PDF now.