Get a Second Passport Without Traveling

Having a second passport is an important diversification tool that gives you more options, including possible tax reduction, new investment options, and a safe haven to go to in times of crisis.

If you are new to the idea of dual citizenship, consider starting here:

Simply put, having two passports means having more options. The recent coronavirus panic has convinced me more than ever that every entrepreneur and globally-minded person should consider second citizenship.

When times are good, a second passport means more opportunities to prosper and enjoy life. When times get tough, it gives you an alternative. During the coronavirus panic, countries are closing their borders and turning away people with certain passports.

Here in Malaysia, all Chinese citizens entering the country are subject to quarantine – even if they don’t live in China. Imagine being stuck in limbo, or being trapped in a crisis zone because your only passport limited your options.

However, during times of panic, it is not advisable or even possible to travel abroad in order to start the process of obtaining citizenship in another country or to start with a residence permit that will lead to citizenship in the future.

Fortunately, there are several ways you can obtain a second passport from the comfort of your own home.

How to Get Citizenship

The idea of becoming a citizen of another country without leaving your living room may seem foreign because most countries require you to actually live there to join their ranks as a citizen.

To become a German citizen, for example, you must move to Germany and spend the vast majority of the next eight years in the country, learn the language, and pay taxes. The same is true of the United States, Canada, Australia, the United Kingdom, and most other developed countries.

While countries like Ireland or Latvia offer “Golden Visas” that allow high-net-worth individuals to invest in the country in exchange for a residence permit with minimal time on the ground required, only Portugal’s Golden Visa allows you to achieve citizenship without putting substantial time in.

(For the record, Portugal’s Golden Visa requires just 14 days per year in the country for citizenship, while Ireland requires 183 days and Latvia requires nine months. Other European countries operate similarly.)

Here at Nomad Capitalist, we recommend thinking outside of the box when it comes to getting a second passport. The tax, financial, and lifestyle costs of moving to another country full-time often aren’t worth it for successful entrepreneurs. While you won’t easily become a German or Canadian citizen from home, there are other countries that will take you.

If you already have a “Tier A” passport (that is, one that allows visa-free travel to both the United States and Europe), having another high-profile passport may not be necessary or even advisable.

In my opinion, a lesser-known passport from a small, off-the-radar country not only means that the country will be less likely to bother you but that its citizenship can be more easily obtained.

That said, let’s discuss a few ways to obtain second citizenship from home: 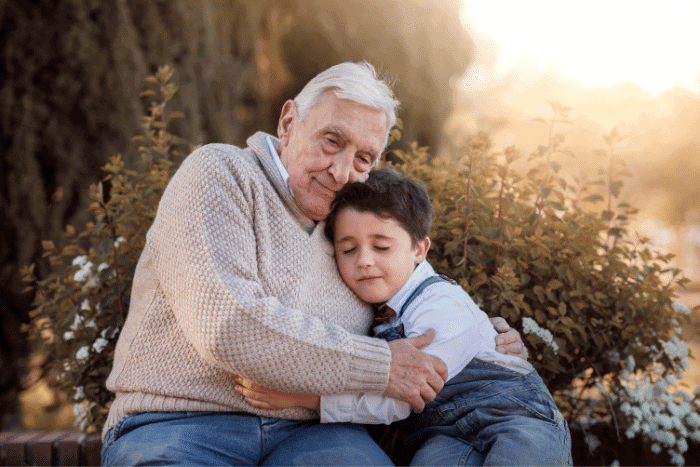 In many countries, you can use your grandparents’ citizenship to obtain a second passport.

Before discussing slower or more costly options, I always consult our clients on all options available through their family tree. Citizenship by descent is the process of obtaining citizenship you technically qualify for already because a parent, grandparent, or great grandparent had it.

While citizenship by descent can be tricky (I’ve seen multiple cases where someone’s grandfather immigrated one year too late), the good news is you can usually start the process at an embassy or consulate in your home country.

Many people qualify for Italian citizenship by descent, and while the process takes longer through an embassy than by going to Italy, it’s still possible.

Depending on where you live and the country you’re claiming citizenship from, there may even be a consulate near your home. We recently helped a US citizen get Mexican citizenship, which was quite convenient given the dozens of Mexican consulates all over the United States.

Bottom line: because citizenship by descent involves giving you a passport you’re already entitled to, you don’t need to travel or jump through a lot of hoops. The hardest part is determining your eligibility and proving it. Once you do that, the embassy will be happy to help you. 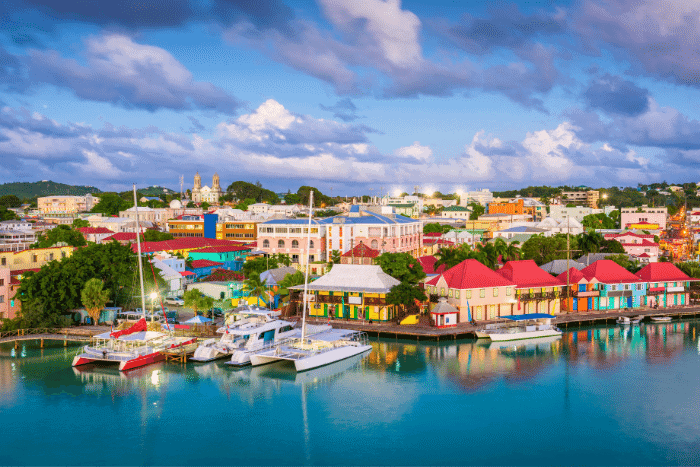 Antigua and Barbuda is one of several citizenship by investment countries.

In recent years, the number of countries offering citizenship by investment programs has grown from two (only St. Kitts and Nevis and Dominica) to around one dozen. There are now numerous, commoditized programs that allow you to obtain citizenship in a matter of months by investing in the country.

There are two European Union countries that offer economic citizenship – Malta and Cyprus – and both require you to put some time in on the ground.

Four of the five Caribbean countries – St. Lucia, Dominica, St. Kitts and Nevis, and Grenada – do not require any time on the ground to become a full citizen. The same is true of the tax haven of Vanuatu in the South Pacific, where citizenship can be had in about sixty days.

One other Caribbean country – Antigua and Barbuda – requires you to spend five days in the country within the first five years, which means you’ll have plenty of time to get around to visiting.

For each of these programs, you can undergo the entire citizenship acquisition process from home. In fact, as someone who has gone through these processes four different times, I recommend you stay at home or at least in one place during the month you are collecting the extensive paperwork required.

There are two types of citizenship by investment options: donations and investments. While donating $100,000 to a Caribbean island nation may seem like a waste of money, the ROI on potential tax savings or simply peace of mind can be well worth it.

That’s especially true considering that you don’t have to visit the country (unless you want to), saving valuable money and time that many people don’t consider.

By making a donation to a country, your citizenship can be approved in just a few months with minimum hassle. They approve you, you wire the money, and your agent collects your passport and sends it to you anywhere in the world.

(I remember being interviewed on a radio show from my home in Georgia when DHL rang my doorbell to deliver my brand new Comoros passport, thousands of miles away from the African archipelago nation.)

The other option for citizenship by investment is to make an actual investment you can resell later. This may seem appealing, although investment levels are higher and there is more hands-on involvement.

Turkey grants citizenship to anyone who invests $250,000 in real estate; that means that if you care about your investment property, you may want to visit.

It is possible to use powers of attorney to reduce your time on the ground, however. Our team frequently locates properties for clients who sometimes buy them sight-unseen because they trust our knowledge of the market. Once the investment is chosen, lawyers take over the legal process with a separate power of attorney. However, not everyone is as comfortable with giving up the additional control over donation options.

Bottom line: if you have a six-figure sum to donate or invest, you can get a second passport in a matter of months with zero or minimal travel. 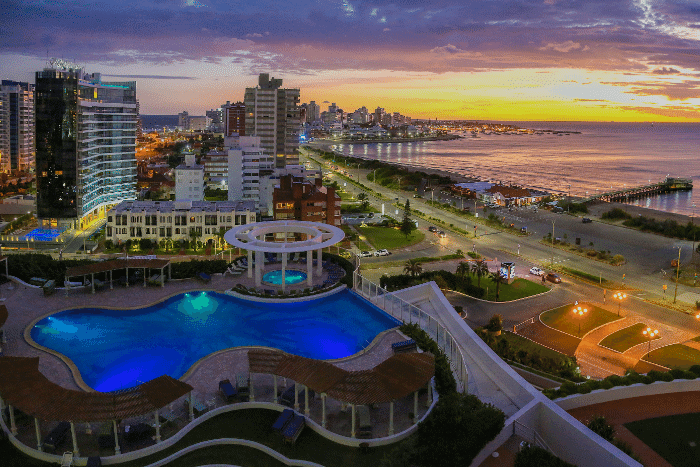 You can get paper residence in Uruguay and many other countries.

As mentioned earlier, many countries require you to live there nearly full-time in order to become a naturalized citizen. You’re most familiar with the naturalization method of citizenship as we’ve all seen photos of oath ceremonies where foreigners get sworn in as new citizens of the United States, Australia, etc.

However not every country requires you to actually spend time on the ground in order to become naturalized. I coined the term “paper residence” or “paper citizenship” because the process largely takes place on paper.

We don’t generally discuss paper residence countries because, when millions of people become aware of them, abuse runs rampant and they shut down. But the concept is that you obtain residence in the country, visit once every year or two to renew your permit, and otherwise don’t live there.

These countries haven’t defined a minimum stay in their citizenship law, meaning you only need to be a “lawful resident” of the country for a certain period of time before applying for citizenship.

There are many variables; waiting times can run from two years to ten years or longer, some countries require a language test while others don’t, and so on.

While obtaining a residence permit generally requires you to visit the country – even if for only one or two days in some cases – that initial visit can sometimes be postponed by using powers of attorney.

I am currently obtaining residence in a low-tax country and the process is entirely remote. I sent copies of my passport, bank statements, and a medical report, and my lawyers will open my local bank account into which I’ll wire $20,000 to meet the residence program requirements. Once that’s done, I will be granted residence and will need to collect my residence card within one year.

I also obtained permanent residence in Colombia as an investor. Again, my lawyers in Colombia handled all of the paperwork and my interview was in the Colombian embassy in Malaysia, a mere two-minute walk from my home. Upon approval, you have six months to visit Colombia to collect your “cedula” card.

Other countries have similar processes where travel can at least be delayed. The naturalization process differs from citizenship by investment in that you won’t be naturalized as a citizen of a country you’ve never set foot in, but visits can be delayed and minimal once started.

Countries that offer what I call “fast track naturalization” may require even less time on the ground if you invest a significant amount of money ranging from $100,000 for emerging countries up to a mid-seven figure sum for select European Union countries.

Both paper residence and fast-track naturalization programs are far less commoditized than the other options; they tend to work better for citizens of western countries whereas citizens of Asian and Middle Eastern countries may be better of with citizenship by investment.

Get Started on Your Second Citizenship

Whether you’re too busy working to travel or you’re grounded by the coronavirus, there are options to start the process on your second passport.

As I often say, time will pass regardless; whether you become a dual citizen six months from now or not is up to you, but it’s worth starting the process as early as possible.

If you’re interested in obtaining your second passport, feel free to reach out for help.